“Nothing Will Fundamentally Change”: The Case of Janet Yellen

Janet Yellen has been nominated as Secretary of the Treasury. Like Biden’s other recycled Obama-era picks, Yellen signals continuity with the capitalist system which puts business interests over the needs of the working class. 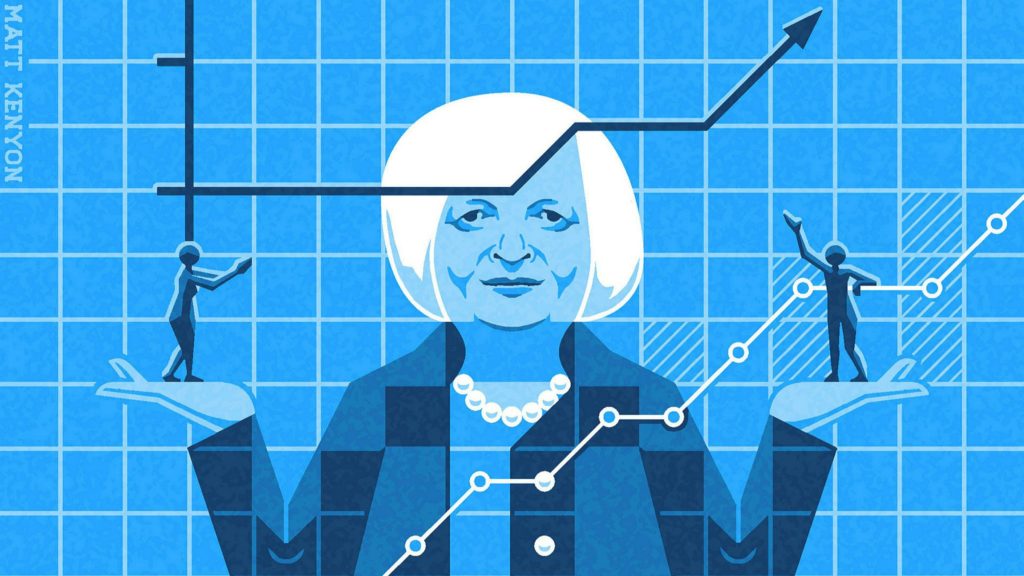 On Monday, president-elect Joe Biden announced his intention to nominate Janet Yellen as Secretary of the Treasury. A former head of the Federal Reserve (Fed) and chairwoman of the Council of Economic Advisors during the Clinton administration, Yellen has a long resumé of working for the political establishment. Her appointment may mean greater government intervention in the economy than during the Trump administration, but also signals Biden’s desire to return to business-as-usual and put business interests over the needs of the working class.

Unlike previous Secretaries of the Treasury who have hailed from Wall Street — several directly from Goldman Sachs, such as Steven Mnuchin — Yellen is a so-called “economist’s economist,” a professor emerita at UC Berkeley with extensive academic experience. Her first foray into politics was under the Clinton administration, where she served on the Federal Reserve Board of Governors and subsequently the Council of Economic Advisors, the agency which advises the president on economic issues. She was the president of the Federal Reserve Bank of San Francisco from 2004 until 2010 when President Obama appointed her as vice-chair of the Fed.

Janet Yellen is best known for being the first female chair of the Fed — and the first Democratic chair since 1979 — a post she occupied from 2014 to 2018. At the Fed, she was “dovish” on monetary policy, meaning that she supported low interest rates to encourage investment and spending and thereby growth and hiring. As a labor economist, she has long been concerned with unemployment and trying to boost labor markets.

Yellen would assume her position as Secretary of the Treasury in the middle of a deep economic crisis caused by the coronavirus pandemic. The crisis — and the government’s willful neglect — has pushed 8 million into poverty. Over 20 million jobs have been lost and nearly 69 million people have filed for unemployment benefits. As eviction moratoriums and unemployment benefits are set to expire at the end of the year, millions more will face homelessness, hunger, and poverty.

The Trump administration’s actions have been woefully inadequate to tackle the present crisis. Congress has passed just one relief bill, the $2 trillion CARES Act, adopted nearly nine months ago. The CARES Act overwhelmingly benefited the wealthy, reflecting the fact that the government has largely put profits ahead of human need, stepping in to rescue corporations and pumping enormous infusions into the financial system. Another recovery package is unlikely to be passed before 2021.

From this perspective, progressives are likely to approve of Biden’s Secretary of the Treasury nomination. Yellen has been a vocal proponent of increased stimulus spending during the coronavirus. She signed a public letter with 150 economists calling for another big relief bill, and emphasized that the government should prioritize protecting citizens and supporting state and local governments. According to Yellen, concerns about the deficit and U.S. debt should not get in the way of these aims.

Yellen has other credentials which will appeal to progressives, particularly her support for more, rather than less, financial regulation. She has been critical of Trump’s loosening of financial regulations, such as attempts to dismantle Dodd-Frank, a law passed by the Obama administration in the wake of the 2008 Recession. Of the 2008 crisis, she has admitted that the government “let too much money out the door,” and warned that huge vulnerabilities remain in the financial system.

And in stark contrast to her soon-to-be predecessor Steven Mnuchin (who infamously took a jab at climate activist Greta Thunberg), Yellen has also expressed concern over climate change, and is a founding member of the Climate Leadership Council (CLC). However, to compliment her on this point is to grade on a curve: Yellen supports carbon taxes, a market-based “solution” that doesn’t stand a chance of stopping climate change, especially as other founding members of the CLC include Shell, BP, and Exxon Mobil.

While it may be tempting for progressives and leftists to let out a sigh of relief at this ostensibly progressive, glass-ceiling-crushing pick, a glance at the reactions to Biden’s nomination should immediately give us pause. Mainstream media outlets like CNN have complimented Biden for his “genius move,” as Yellen manages to “[thread] the needle between Democrats and Republicans… Wall Street and Main Street.” Politico concurs, writing that Yellen is “acceptable to Wall Street [and] expected to take a “no-surprises approach expected to be a hallmark of the incoming president’s tenure.”

How can Janet Yellen be an appealing choice for progressives, Republicans, Wall Street, and international financial institutions, all at the same time? The answer is that the economy is set up to benefit capitalists and corporations at the expense of the working class, and the role of Secretary of the Treasury — whether it is occupied by a Republican or Democrat — is to uphold this system.

Tellingly, Yellen herself has seen her economic roles as apolitical, saying that when transcripts of meetings at the Fed are eventually released, readers “will not find any signs of political motivation.” In other words, the political affiliations of the country’s highest-ranking economists do not affect financial and economic decision-making; there is a bipartisan consensus on capitalism and putting profits ahead of people.

Much like Biden’s other recycled Obama-era picks, Janet Yellen does not signal any change to this system. Her chief complaint about the Trump administration, beyond it not giving enough crumbs to the working class through another stimulus package, is that the United States has retreated from its leadership on the global stage. At a Credit Suisse event, she said, “I am very concerned about what I would also regard as a U.S. retreat from its traditional role … and all the institutions that we built in the postwar period.” She is a huge proponent of free trade and multilateral treaties which overwhelmingly benefit corporations. Like Trump, she views China as a threat to U.S. hegemony, but differs on the details of how to address the conflict.

Yellen’s criticism of the handling of the 2008 crisis also rings shallow when we recall that she was in one of the  highest echelons at the Fed during the recovery period. Likewise, Bill Clinton, for whom she was a chief economic advisor, bears substantial responsibility for the deregulation and the conditions which precipitated the recession, and for the Democrats’ conservative turn. She both supports and has actively crafted the current system which has seen billionaires increase their wealth by $1 trillion since the pandemic began. In fact, while she has a “dovish” reputation, she has nonetheless expressed concern over the U.S. debt and signaled that Medicare, Medicaid, and Social Security cuts are not out of the question.

We should not praise Biden’s choice for Secretary of the Treasury, and we should not delude ourselves into thinking that the Department of the Treasury, Federal Reserve, or other capitalist institutions can be reformed or used for good if only the “right” people ran them. When Yellen takes power in 2021, it will be to work for the establishment. She will make sure that this destructive system keeps chugging along, no matter how many more crumbs she offers to the working class than Secretary Mnuchin.

Economist Paul Krugman recently praised Janet Yellen effusively in his New York Times column, writing, “It’s immensely reassuring to know that economic policy will be made by someone who knows what she is doing.” It’s true that Yellen knows what she’ll be doing at the Department of the Treasury: protecting businesses and the establishment at the expense of the working class.