Saturday November 19 was a historic day for the Argentine left. It marks the day of the largest left rally in the past 30 years. Called by the Left and Workers Front (Frente Izquierda de los Trabajadores-FIT in Spanish), the mobilization brought together more than 20,000 people including factory workers, university students, teachers, nurses and families. 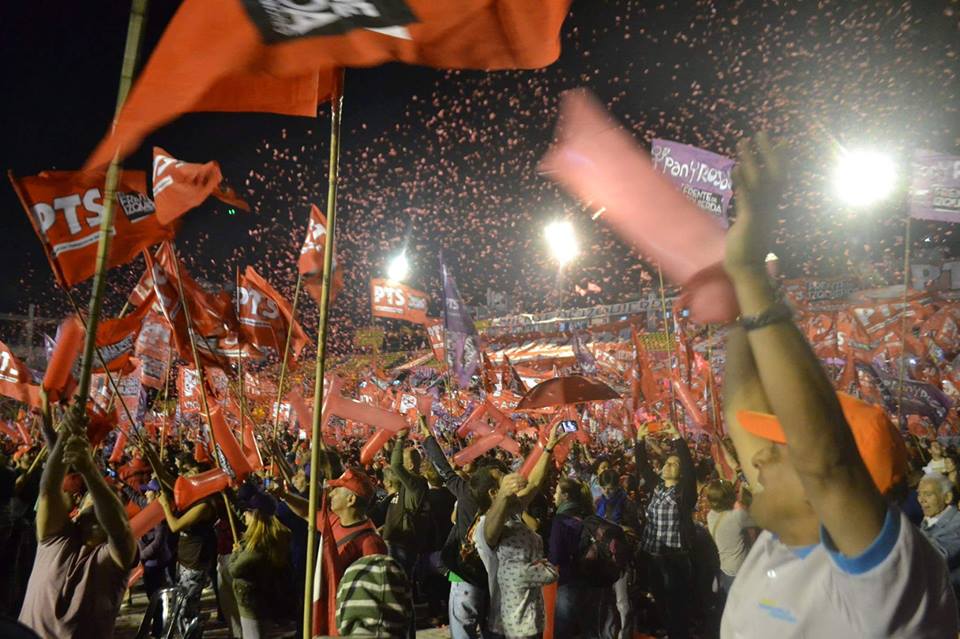 Saturday, November 19 was a historic day for the Argentine left. It marks the day of the largest left rally in the past 30 years. Called by the Left and Workers Front (Frente Izquierda de los Trabajadores-FIT in Spanish), the mobilization brought together more than 20,000 people including factory workers, university students, teachers, nurses and families convened at the Atlanta Soccer Stadium in Buenos Aires. 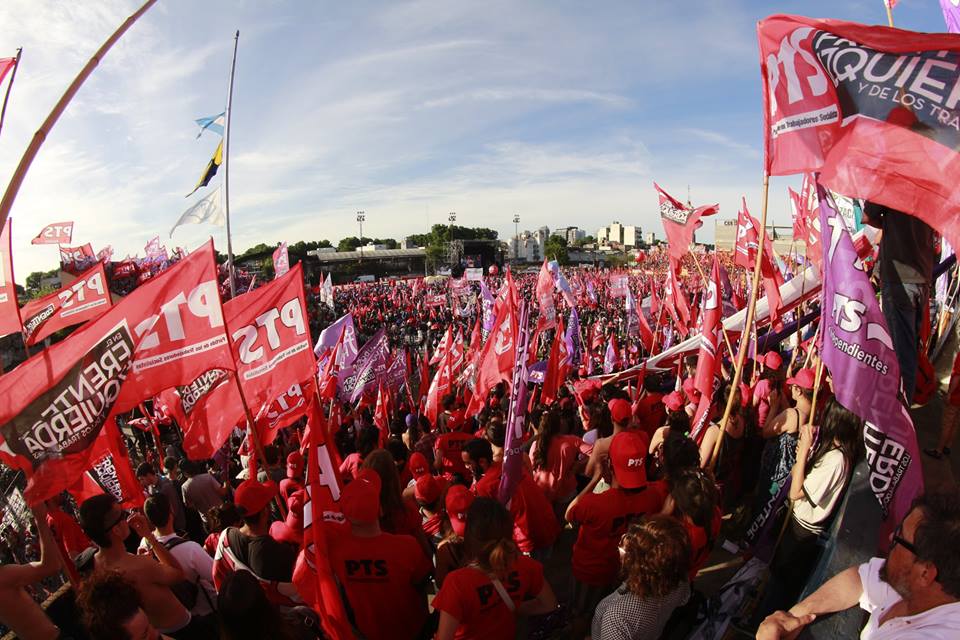 The Left and Workers’ Front (FIT) is an electoral coalition of three Trotskyist political forces: the PTS (Partido de los Trabajadores Socialistas—Party of Socialist Workers), PO (Partido Obrero—Workers’ Party) and IS (Izquierda Socialista—Socialist Left). The three organizations are united under a program for class independence and involved in anti-capitalist struggles to build a socialist workers’ government.

Gloria Grinberg reported for Left Voice from outside Atlanta stadium:

Grinberg interviewed worker militant Raul Godoy (a PTS member and representative in the Neuquén Province Legislature) and Andres Blanco (union representative) from Zanon, a well-known worker-controlled ceramics factory, Zanon (renamed “Fabricas Sin Patrones- Factories without Bosses-FaSinPat). The factory has been functional and completely worker-run since 2001. Godoy calls for rank and file workers to organize in their unions to fight the bosses as well as the union bureaucracy.

The streets filled with people marching on their way to the stadium. See the PTS (Party of Socialist Workers) column here:

Inside, the stadium packed in as people chanted and cheered, their flags waving in the sun. The sheer number of people gathered is astounding. See an aerial view:

During the rally people watched and listened to speakers from members of the FIT. Below is an excerpt from a speech by Myriam Bregman. Bregman, a candidate for the FIT in Argentina’s recent election is a human rights lawyer. She famously took former military leaders to trial for their role in torture and disappearances of people during the military dictatorship. Bregman was elected to Congress as a representative of the FIT and lives on the salary of a teacher as a political principle, donating the rest of her income to worker struggles.

Bregman spoke about women’s struggle and the need for an anti-capitalist women’s movement. She said, “We know that patriarchy and sexism follow capitalism like a shadow. But we will not leave the fight for women’s basic rights in the hands of bourgeois politicians who turn our demands into demagoguery.”

Other speakers spoke about need to combat government cuts and the union bureaucracy. They spoke about the need to organize a left alternative by organizing the most combative sectors of the working class. This sentiment was echoed by various speakers throughout the rally. 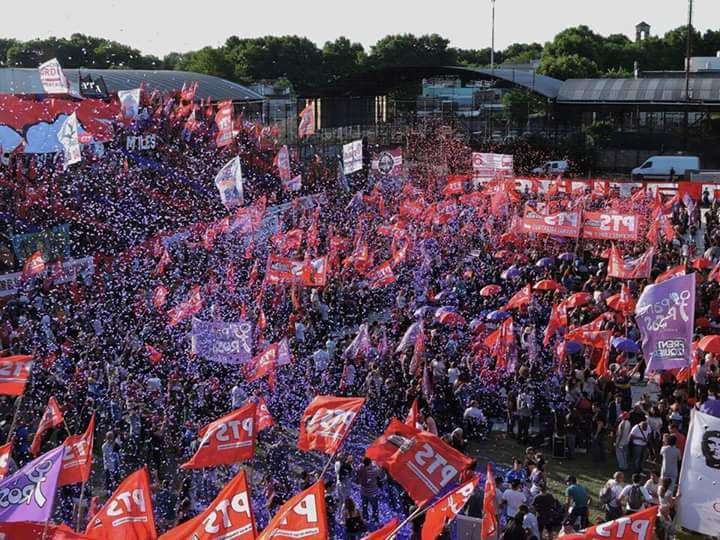 The final speaker, the former Presidential candidate Nicolás del Caño (PTS) won 3.3 percent of the national vote in Argentina. This is a higher percentage than both Gary Johnson and Jill Stein in the U.S. elections last week. His campaign slogan: “Capitalism can’t go on!”. Del Caño also mentioned Left Voice, condemned racist police murders in the U.S., and charged Trump and Clinton with being enemies of the working class and oppressed people. Because of their dynamic election and leadership in class struggle as well as the fight for women’s rights and organizing youth, the FIT also has four seats in the National Congress and dozens of city council representatives.

Del Caño, or “Nico” as he is called in Argentina, called out the political caste who are paid super-salaries. After denouncing mainstream politicians for blindness to the realities of living on a worker’s salary, Del Cano demanded politicians be paid a teacher’s salary. 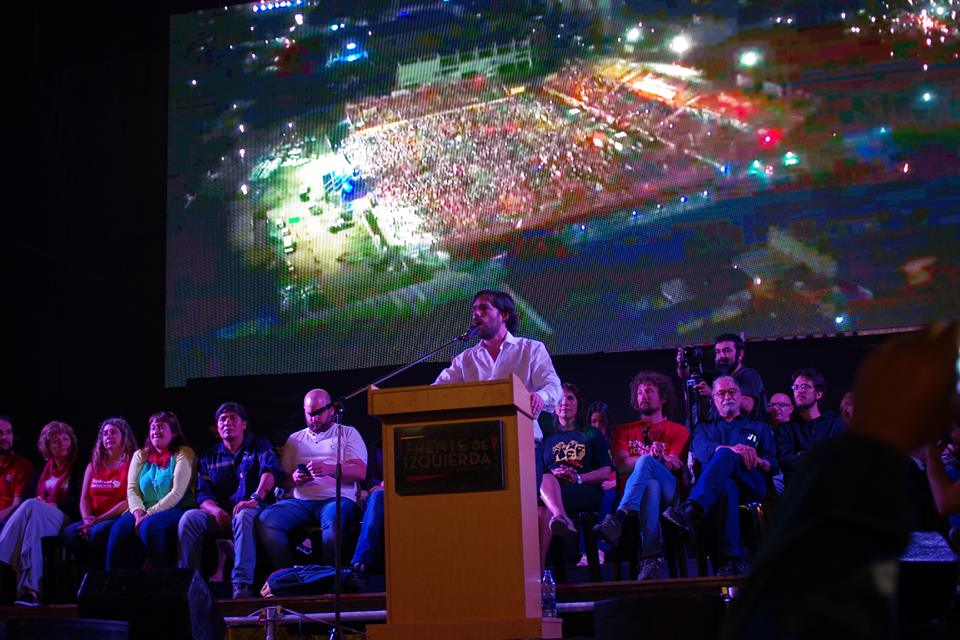 With a final condemnation of Trump’s presidency, Nico declared “Our struggle is not only to end capitalism within the nation, but end imperialism throughout the world!” On cue, fireworks lit up the night sky. This historic event is an inspiration to the international left and Left Voice is proud to build with members of the Frente la Izquierda de los Trabajadores as we collectively seek to build socialism internationally and in the US. We invite like minded people to join us in this project.

Are you involved in a struggle or social or political movement? Send your struggle to Left Voice! Email us at [email protected] or send us a facebook message with your story.