Now Is the Time to Build the Fight Against Biden

Biden is set to rule as a true-to-type neoliberal, with mass deportations, austerity, more defense of killer cops, and war on the Global South. 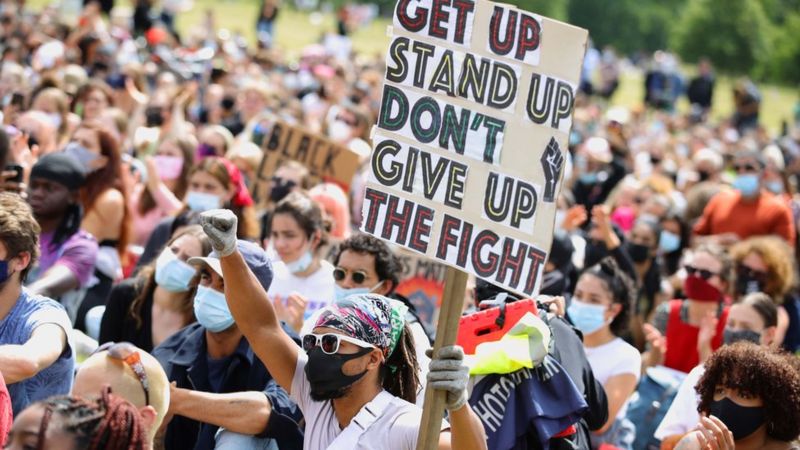 The following talk was given at the Left Voice  online event: “Fighting the Next Oppressor: Socialist Strategy Post Elections” on November 14. If you are interested in collaborating with Left Voice, sign up here.

When all is said and done, the 2020 Election will have lasted 1,258 days. That’s more than three years of campaigning, with close to $7 billion spent on the presidential race alone. In the end, we were asked to choose between two parties of imperialism, capitalism, and racism. At least 5 million more  chose to support Biden, not because of any  love for him or his policies, but because they hated Trump. And so now, it’s a waiting game until Trump is out of office. And I’m not sad to see him go. Trump is a racist and a war criminal who has brought nothing but attacks on the working class, people of color, and the most oppressed. But  we should be very clear: this election is far from a victory for working people.

Biden is set to rule as a true-to-type neoliberal, with mass deportations, austerity, more defense of killer cops, and war on the Global South. This is the tragedy of the bipartisan system: as the health care system falls apart, millions are unemployed, a housing crisis threatens to explode, and student debt is reaching unheard-of levels, we are presented with Trump and Biden, two men with no  solutions to any of these issues. And therefore, many supported the Democrats in the hopes that they will bring about some much-needed reforms. But all of the members of the Democratic Party, no matter how left they might appear, are going to be complicit in the coming attacks on the working class and oppressed under a Biden administration. Because that’s what Democrats do.

We need a party of our own because we can’t keep supporting our class enemies in hopes that this time, finally, things will turn out differently.

While much of the mainstream media painted the elections as a triumph of democracy, this election showed again that American Democracy is a farce. The Electoral College, not the popular vote, determines who wins. The Senate gives the smaller, whiter and more rural states a disproportionate amount of power. And widespread voter suppression keeps millions of young people, immigrants, and the formerly incarcerated from casting a vote.

This election doesn’t show the strength of American democracy but instead, its many failings. We must organize to fight not only Biden but the entire system of capitalist democracy, which is no democracy at all.

And let’s be clear, Trump may be gone but Trumpism wasn’t defeated. Trump received  more votes in 2020 than he did four years ago. Meanwhile,  several Trumpist Republicans were elected to Congress, including Madison Cawthorn, the Hitler fanboy, in North Carolina and  Majorie Taylor Green, the QAnon supporter and anti-masker, in Georgia.

Trumpism and right-wing populism won’t be defeated at the polls. And you certainly can’t defeat the right wing with the same neoliberal approach that gave rise to  Trumpism to begin with. You beat back the Right with left-wing organizations of the working class and through class struggle. We beat them by mobilizing  in our workplaces and in the streets. We beat them by organizing a united front with broad sectors of the working class and oppressed.

I think that needs to be said again: Biden is not the lesser evil. He’s the more polite evil. Sure, as president, he probably won’t launch unhinged tweets on a daily basis or be so bold-faced about his corruption and racism. And sure, he probably won’t explicitly dog whistle to white supremacists. But, as president, Biden will still implement racist and white supremacist policy.

This isn’t speculation;  he’s said it. He even said that it was Trump who wants to defund the police, not him. Biden is a cop supporter through and through which means that he is perfectly fine with the racist war cops wage on communities of color. Indeed, he’s not only fine with it, he helped create the current mass incarceration epidemic when he wrote the crime bill in the 1990s.

On international issues, Biden might be even more of a war hawk than Trump. Biden, after all,  ran on a platform of being “tougher” than Trump on China, has completely supported Israel his entire career, and helped to whip votes for the war in Iraq. Just in the past few days, Biden brought on Cecilia Munoz to his transition team, who helped orchestrate the record-setting deportations under Obama. Bien is the former Vice-Deporter-in-Chief and is gearing up to do it all over again.

So Joe Biden, who promised his billionaire and millionaire donors that “nothing would fundamentally change” and who was elected to bring back capitalist stability, is a warrior for this system. His transition team is full of CEOs; does anyone really think that he’s going to pop off with anything resembling good policy for the working class?

As President of the United States, Biden will almost certainly move to the right in order to build bridges with the Republican Party. In fact, in many ways, he has already begun to do so. Who can forget his (and Kamala Harris’) passionate defense of fracking? his constant opposition to Medicare for all and the green new deal? Or his callous remarks that the police don’t need to be defunded, but simply better trained to shoot people in the leg rather than the heart?

For the global south, the working class, the oppressed, and the planet Biden is no lesser evil.

This whole election, in fact, has made clear the utter failure of the strategy of pushing the Democratic Party to the Left. In 2016, I was a big Bernie Sanders fan. I really believed that he was going to change things. But, after he first fell in line behind Clinton and then, this year, totally fell behind Biden and uncritically backed him it became clear to me what he represented. Sanders was just a more reformist face for the same old Democratic Party. He supported imperialism and capitalism, as long as they were done in slightly “better” ways and put forward the idea that it was possible to “fix” capitalism by passing a few reforms.

In fact, Sanders turned out to be exactly what the Democrats needed because he helped them, over the past four years, rebuild and re-brand their party. He brought new people into the party, stopped others from leaving, and helped create the illusion that the Democrats could be a left-wing party. And despite his efforts, the Biden administration is now marginalizing Sanders and the progressive wing of the party.

And that’s all that is: an illusion. Because the Democratic Party can’t ever be a left-wing party because it’s owned and operated by and for the wealthy. This is the central conceit of the Democrats: they allow capitalists to don a better costume, appeal to social movements, weaponize their power to get elected, and then unceremoniously kill them in the night.

Look at recent history: Obama got elected on the back of the anti-war movement but then, as president, not only didn’t end the war but escalated it with drone strikes while the anti-war movement fizzled away. And nothing changed. Look at the Women’s March: they got a million people onto the streets to oppose Trump but then they pushed their “power to the polls” and campaigned to elect another president accused of sexual assault. There weren’t even mass demonstrations against Amy Coney Barrett whose confirmation represents a potentially deadly attack on reproductive rights. Instead the call was: Vote for Biden.

Just look at the Black Lives Matter Movement from this summer. Millions of people took the streets in the largest ever social movement in U.S. history to protest racist police violence. And then the Democrats (with their allies in the Unions and Non-Profits) managed to con them into voting for Joe Biden and Kamala Harris — who took up none of their demands — because it was the pragmatic choice against Trump. But they were never true allies of the movement.

In fact basically all of the cities where protesters were repressed were run by Democrats. It was Democrats who oversaw the beating and gassing of activists, and it was Democrats who were in charge of the police department that killed George Floyd. This is the lesser evil they offer us: crocodile tears about how we all need to learn and grow and then more of the same racism and violence.

This is what Democrats do — and, ultimately, what Sanders did as well.

It’s the same story time and time again: progressives and activists bite a bullet and compromise their principles in the name of “pragmatism” and then elect a Democrat who enacts policies that hurt the very people who got them elected. It keeps happening but still, every election, we are told that we must be “pragmatic” and vote for a party that has done nothing but steal our slogans and stab us in the back. There is nothing pragmatic about following a bad and losing strategy.

We can do better.

Going forward, we need to organize ourselves to fight back Biden’s attacks on the working class and oppressed — both in the U.S. and around the world. This may sound like a daunting task and, in many ways, it is, but we’ve already seen the beginnings of this.

This year we saw essential workers organize to fight the pandemic and the capitalist austerity associated with it. We saw a mass movement against state violence and a dockworkers strike that shut down all the ports on the West Coast in solidarity.  Internationally, we saw huge movements in France, the Middle East, and in Latin America. In Chile, the working class forced the government to call an assembly to rewrite the constitution.

We run everything. We make their entire economy work and, when we decide to, we can shut it all down. We need to organize to weaponize that power to overthrow the entire capitalist system and end the oppression and exploitation that it represents. We need to build a real political alternative that can take on the Democrats and the Republicans and not instead focus only on small local projects. We are locked in a fight against an enemy that is organized internationally. To defeat them we must also organize ourselves at this level. To quote Malcolm X: “we’re not out numbered, we’re out organized.” The working class and the oppressed vastly outnumber the capitalist exploiters. Now we need to organize ourselves to seize our power and take down the whole system.