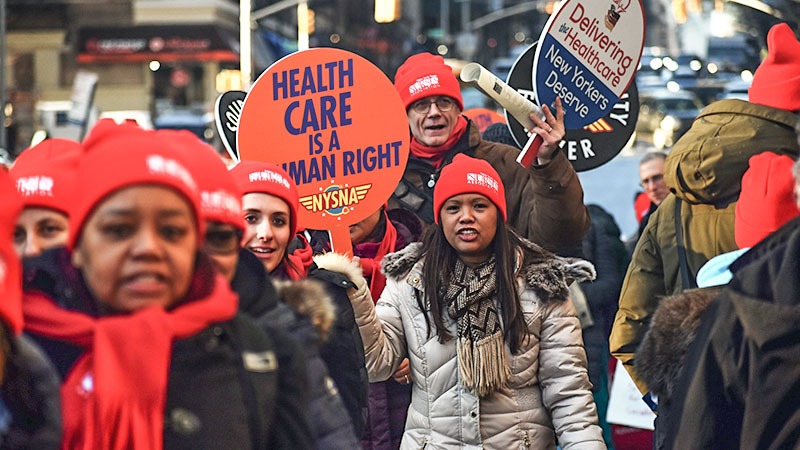 Nurses and patients alike are fed up with understaffing, overcrowding, and astronomical medical debt. By practically all accounts, the entire healthcare system in broken. U.S. healthcare drains billions from taxpayers while barely guaranteeing sub-par standards of care, particularly for working class and poor people. But as millions struggle to make their copays and are forced to delay medical care to save money, the CEOs and shareholders are having a bonanza. The pharmaceutical interests, medical device manufacturers, insurance brokers, private ambulance fleets and other for-profit entities are getting rich off the sickness of everyday people. They’d rather a patient get sick and pay than stay healthy and debt-free.

The impetus for nurses to strike at Montefiore, Mount Sinai, NY Presbyterian-Columbia and Mount Sinai West/St. Luke’s has been long in the making. Not only is there a growing movement across the country for Medicare for All, but nurses are also aware that safe nurse-to-patient staffing ratios – the most central demand in the current negotiations – were made California state law in 1999 and implemented by 2004. And with better nurse-to-patient ratios, studies show patient outcomes improve.

Internationally, large nurses strikes have erupted around the world: 40,000 in Ireland this year, 30,000 in New Zealand and 16,000 in Zimbabwe last year. Closer to home, nurses have also struck in Burlington, Vermont and Providence, Rhode Island. Thus, New York City nurses can be said to be part of a movement much larger than themselves. Through their collective action, with slogans like “Healthcare is a human right” and “Patients over profits,” nurses are fighting for the common good and basic needs of working people everywhere. Recently, healthcare workers’ unions including NYSNA and SEIU 1199 have also protested detrimental cuts to Medicaid.

In February, New York City nurses had pickets at several facilities throughout the city, demanding a fair contract and safe staffing. Thousands of NYSNA members and supporters were in attendance. Throughout the course of the contract fight, members have experienced a taste of their own power. The employers, self-named “The Alliance,” have earned nurses’ collective ire by refusing to budge on central questions including staffing ratios, break coverage, community accountability, concrete measures for workplace safety, and retirement healthcare coverage. For the wealthy elites that run New York’s private hospitals, nurses and patients are expendable. Management wants to keep nurses frantically multi-tasking, often without a moment’s rest. “No bathroom break? No problem!” exclaim the healthcare parasites from their executive suites. “Another workplace injury? Be more careful! Improve your practice!” they say. But nurses are organized, have a union and are tired of being treated like dirt. “If management won’t budge, we’ll have to go out,” is a common refrain.

New York nurses have real strategic power. The thousands of private sector nurses poised to strike are part of a billion-dollar healthcare nexus. Without the labor of nurses, major parts of hospitals will slow down or stop, forcing management to find expensive alternatives at other hospitals or through the use of scab labor. In addition to the immediate, disruptive effect of a strike, nurses can channel the frustration of local communities long neglected by inequitable and inadequate health services. A broad working class fight for better health services could create mass pressure on the hospital execs to cave.

And if nurses need to escalate their fight, they could develop creative tactics. Imagine the shock waves that would reverberate across the country – nay, around the world –  if 10,000 nurses physically occupied the administrative buildings of every hospital to demand safe staffing? Or if they called on the greater public to refuse to pay hospital fees and burn their hospital debt? The healthcare vampires that currently run our hospitals would shrivel up in fear and the city government would be thrown into crisis.

And what if nurses called for every for-profit health facility to be nationalized and run by workers and the community? Such demands would have real popular support.

While such drastic action may seem far-fetched today, workers from around the world have done much more. In fact, it was only last year that tens of thousands of teachers “illegally” struck, from Arizona all the way to West Virginia. Teachers poured into one state capitol building after another, chanting, occupying, and demanding change. They took their own destiny in their hands, and many won gains – not only for themselves, but for their students.

Nurses could spark a similar movement among healthcare workers. Millions of people are literally sick to death of healthcare profiteers getting rich at their expense. Patients in the South Bronx know they don’t get the same standard of care as New York’s wealthy elite. The fight of the nurses is at base a struggle for equitable, quality care for all and decent working conditions – demands that could galvanize support far beyond the Five Boroughs.

In Spring 2018, teachers struck across the country in one of the larger labor upsurges in recent memory. 30,000 Los Angeles teachers followed suit in January. And 40,000 Irish nurses walked off the job this February. What happened with those strikes, and what lessons might nurses draw from them today?

Each struggle had its own strengths and weaknesses. Each developed in a particular context, but certain generalized lessons can be gleaned. The most basic and perhaps most essential is that when workers take mass action for a common goal, they have real power. There is power in numbers, and thousands of workers halting the wheels of production, taking the streets, or occupying buildings can’t be ignored.
Another central lesson is this: when workers take up demands that address the needs of the broader working class, those workers can gain overwhelming community support. Such was the case during the teachers’ strikes, and such would likely be the case if NYSNA nurses walk out.

A third and more difficult lesson involves the question, “Who calls the shots during a strike?” While many sectors of teachers won gains through their recent strikes, others didn’t. Even in LA, where the union was established and had community support, many teachers felt rushed to a decision, disempowered and alienated by how the contract was settled. In Ireland, the nurses’ strike was sold out by union leadership.

This often overlooked but crucial lesson can be summarized as follows: when workers themselves “call the shots” particularly in struggles predicated on mass action, they are in the best position to win. When union officialdom is making decisions for the rank-and-file, when workers are kept in the dark about the terms of negotiation, tactics, and bargaining strategy, workers lose out.

Thus, in many recent struggles, a powerful massive strike was brought to a swift close by timid, sometimes disoriented “leaders” more comfortable relying on legislative/lobbying strategies, negotiations with bosses away from the workplace, and legalistic tactics – instead of the mass mobilization, solidarity, and disruption that is most effective in a struggle.

NYSNA members have great potential power, but that power needs to be unleashed. Over 10,000 nurses have voted to authorize a strike – and others in Brooklyn and Queens are being stirred by their example. It’s now time to call one! And if it is called, nurses will be in the best position to win with rank-and-file strike committees, mass assemblies, and town hall meetings that involve the community and allies.

Nurses must hold the reins of the struggle. Strike to win!