As the U.S is seeing another spike in Covid-19 cases, nurses are continuing to bear the brunt of the crisis. Nurses in Illinois have gone on strike to demand safe staffing ratios. 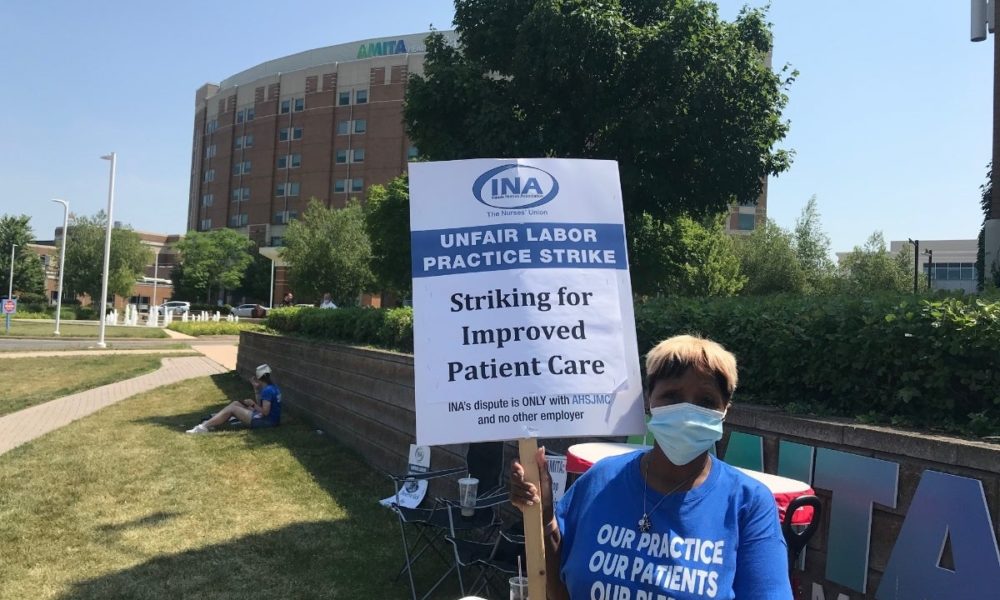 Nearly four months after the United States began shutting down and steeling itself against the rising cases of coronavirus, the U.S. has once again reached a new milestone. Just this week, the U.S. reported a record breaking 68,000 new cases, setting a single-day record for the seventh time in 11 days. Some states, like California, which had already begun reopening, are now experiencing spikes in cases, as well as new daily records and have had to order major rollbacks on their reopening plans in order to curb the rampant spread of Covid-19.

Amidst these rising case numbers, there is still a shortage of sufficient PPE, despite having months to ramp up production of necessary supplies. Health-care workers on the front lines of the coronavirus pandemic are yet again encountering shortages of masks, gowns, face shields and gloves — a frustrating recurrence of a struggle that haunted the first months of the crisis.

The outbreak of the crisis saw a rise of protests and demonstrations, especially by healthcare workers and other workers deemed “essential” — from Amazon warehouse workers to Instacart delivery workers. They demanded proper PPE, hazard pay, and paid sick leave. And now, following nearly two months of Black Lives Matter protests, as cases are again beginning to rise as a result of states’ hasty reopening plans, there has been yet another uptick in workers demanding safe working conditions.

More than 700 nurses at AMITA Health St. Joseph Medical Center Joliet in Illinois have been on strike since July 4 after negotiations between the hospital and the nurses union failed to result in a contract. Contract negotiations began in February and the nurses have been working without a contract since May 9. The Illinois Nurses’ Association has not announced how long the strike will last.

The nurses are striking for safe staffing ratios in the hospital. Especially now, as many hospitals are becoming overrun with patients who have contracted Covid-19 and some have even nearly reached their capacity, it is crucial that hospitals have enough nurses to safely care for patients. Studies show that the more patients each nurse cares for, the higher risk for the patient. The demand for safe staffing is a demand to save patient lives. This is particularly true in some of the most overcrowded hospitals, which disproportionately serve low-income people and people of color.

They have been met with illegal intimidation and threats of termination by management. Meanwhile, AMITA St. Joseph Medical Center Joliet is wasting $5 million per week to pay for out-of-state replacement nurses to scab during the strike. They are being recruited from states like North Carolina, Georgia, Mississippi and Colorado, which are facing their own surges of Covid-19 cases. The cost of one week of the replacement nurses could increase the hospital’s nurse staffing levels by approximately 10% for one year.

On July 12, the striking nurses rejected the most recent paltry contract,which failed to address their central concern to rectify the staffing crisis. The strike has already forced the hospital to withdraw its demand for concessions around sick pay, a particularly galling proposal given the number of nurses nationwide who have contracted or died from Covid-19.

In a statement, AMITA Health spokesman Tim Nelson said hospital negotiators had presented the union with an offer that the system believes addressed many of the concerns raised by the nurses:

“The Covid-19 pandemic has caused severe economic impact on hospitals and health systems throughout the United States, and AMITA Health is no different. We have supported all our associates in many ways throughout the pandemic, including pay continuance and temporary premium pay for our frontline workers most affected, but like other health systems we have had to make some difficult decisions.”

This assertion by Nelson is laughable at best when considering Ascension’s profits. Despite the claim that Ascension is a nonprofit organization, former Ascension CEO Anthony Tersigni earned $17.6 million in 2014, a compensation higher than any other nonprofit executive. He remained on highest-paid lists until his retirement last year. Additionally, although the salary of current CEO Joseph Impicciche is unknown, his tax forms from 2017, while he was a vice president, show him taking home $3.4 million. Ascension also received $200 million from the federal PPP program, funds that were meant to go towards small businesses.

The union says that the strike and negotiations will continue until staffing issues are resolved.

As Covid-19 cases continue to spike, it is likely that we will see more strikes and struggle around the country. The nurses in Joliet are showing us the power of the working class. We don’t need mega-wealthy CEOs, who care about nothing more than their bottom-line, to “run” hospitals. We need nurses, along with doctors and staff, to run and control hospitals. They are the ones who truly know how to keep patients safe and healthy and are leading the fight on the frontlines, against both their bosses and the coronavirus.

You can support the nurses fighting for safe staffing by donating to their GoFundMe strike fund here. You can visit their Facebook page for updates here.