Thursday’s storms and flooding in New York City show the reality of climate change — and the city’s unpreparedness for the devastating consequences of a warming planet. 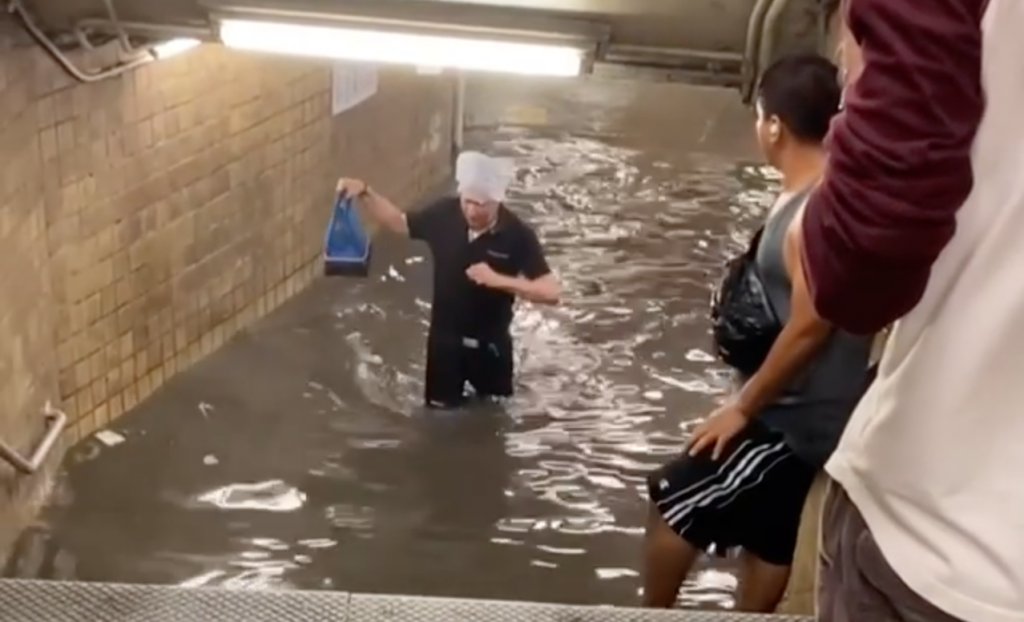 On Thursday evening, New York was hit by strong storms and flash flooding. New York City in particular was pummeled by heavy rains from Tropical Storm Elsa, leading to flooded subway stations and roads. The storm is making its way up the East Coast, and 40 million people in states from New Jersey to Maine have received storm advisories. The extreme rainfall is consistent with weather patterns due to climate change and demonstrates how unprepared even the world’s wealthiest metropolises are for the catastrophic impact of a warming planet.

Videos on Twitter show commuters wading through waist-deep murky water in the subway and huge streams of water cascading down staircases and through station ceilings. Meanwhile, the rains overwhelmed and flooded the Major Deegan Expressway in the Bronx, the northernmost area of the city, where over a dozen motorists had to be rescued from the rapidly rising water. Drivers in Yonkers and suburbs outside of New York City likewise faced dangerous flooding, and many roads remained closed for several hours.

You might be interested in: The Days the City Stood Still: Lessons from the 2005 NYC Transit Strike

New York City is no stranger to crumbling infrastructure. The Metropolitan Transportation Authority (MTA) in particular has frequently been the target of austerity despite the fact that the city’s public transit is in dire need of investment and overhaul. Some parts of the subway’s infrastructure have remained unchanged since the 1930s, and many subway cars currently in operation date back several decades.

The dire state of the city’s infrastructure is not due to a lack of financial resources — after all, New York is the world’s wealthiest city and has the world’s highest concentration of billionaires. Rather, crumbling subways, roads, public housing, electrical grids, and water systems are the consequence of an economy built in the interest of capital. New York’s capitalist-aligned politicians — Democrats and Republicans alike — have time and time again refused to fund public works or raise taxes on the wealthy to fill budget gaps. Instead, public transit, education, healthcare, and institutions and services that benefit the working class are always on the chopping block. New York City also has the country’s largest police budget — $10 billion a year, including pensions and legal settlements — and the City Council recently decided to increase the NYPD’s funding by $200 million.

But Thursday’s dramatic scenes are not only a testament to New York’s  under-investment in infrastructure — they demonstrate that no part of the United States is immune to the effects of climate change, whether in the form of flash flooding, extreme heat waves, or drought. As the mainstream media has pointed out, extreme rainfall and more devastating storms are clearly a consequence of a warming planet. And as fossil fuel extraction and environmental devastation continue unabated, the dangerous weather of the past few weeks is in all likelihood the new normal — a new normal for which New York City and the world at large are utterly unprepared.

Capitalism offers no solutions for the devastation of climate change. The current crisis is a direct result of capitalist production, and capitalists have no incentive to stop profiting from environmental devastation. Thursday’s dramatic scenes also showed that climate change and infrastructure are inextricably linked, and this exploitative mode of production will do nothing to protect the working class from experiencing the deadly consequences of a warming planet.

Rather than placing our hopes in bourgeois politicians to solve a crisis of their own making, New Yorkers need to directly challenge the power of capitalists by showing that the city will grind to a halt without its working class. Nothing less than a democratically controlled, planned and rational economy based on human need can stop climate change and help mitigate its dangerous consequences which fall disproportionately on the working class.