One month into his tenure as mayor of New York City, Eric Adams has proved himself staunchly pro-cop and anti-worker. We need to mobilize against both him and the Democratic Party, neither of whom will provide solutions for crime or the health and social problems affecting the city. 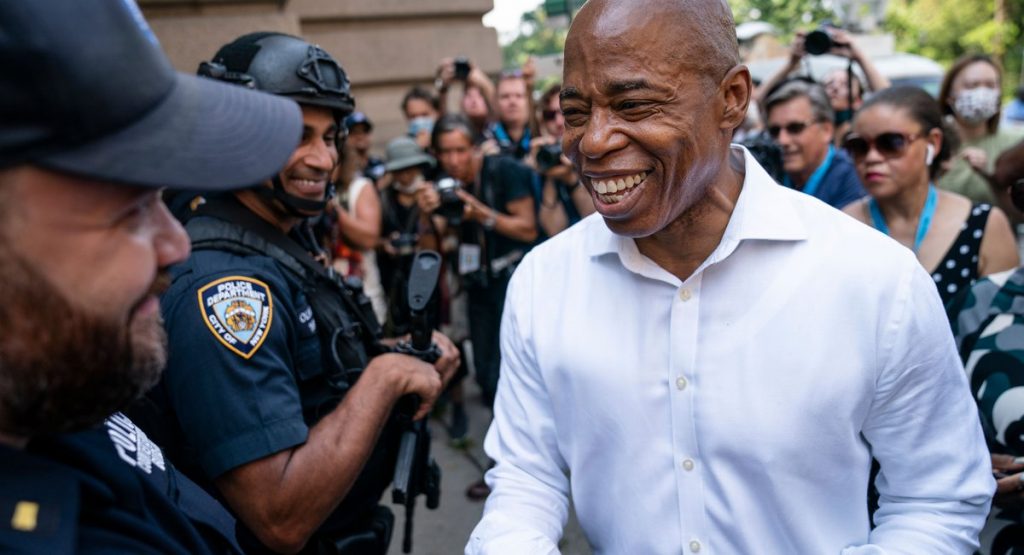 When Eric Adams, a former transit cop and the borough president who oversaw the mass gentrification of Brooklyn, won the clown car of a Democratic Party mayoral primary, a piece of guerilla art appeared all over the subway system. The sticker referred to a story that Adams often tells about being beaten by the cops as a child, an experience that he claims led to him deciding to join the police force to clean it up. It read simply: “Eric Adams was beaten by the NYPD and now he wants to make sure that you can be too.”

This, unfortunately, does seem to be the case.

As mayor, Eric Adams — the first New York City mayor of color since 1993 — has been staunchly pro-cop and anti-worker. In the last week alone, he’s attacked the New York bail law, a measure based on a long struggle by activists to end cash bail in certain cases and allow poor and working class people the opportunity to await trial in the safety of their own homes, within their community, instead of in overcrowded and dangerous jails across the state. Using the deaths of Detective First-Grade Jason Rivera and Police Officer Wilbert Mora, Adams is building on the political momentum of conservatives to tear down the newly won criminal justice reforms.

He recently pushed for legislation allowing 16 and 17 year olds to be tried as adults. Adams also announced plans to bring back the controversial anti-crime units which were formally disbanded in 2020 as a concession to Black Lives Matter protesters. These so-called plainclothes police units were responsible for countless violent acts against people of color who were racially profiled and targeted by searches, and members of this unit were responsible for the brutal shooting of Amadou Diallo in 1999.

These moves all increase the NYPD’s ability to repress and terrorize the New York working class, especially young Black and Brown people. Adams points to rising violence and the recent deaths of two NYPD officers as justification for rolling back numerous reforms that were won by activists after years of struggle. He is hoping to scare enough people with the threat of gun violence that he can implement a devastating roster of concessions to the NYPD without backlash. He is supported in this by President Joe Biden, who plans to visit New York on Wednesday to discuss gun crime.

But none of Adams’ proposals will actually do anything to address gun violence. These are the same racist strategies that were lauded during the Reagan era as “tough on crime,” and they were later legislated with the help of President Biden himself through the 1994 crime bill. None of these proposals actually addresses the root causes of violence in society. If New York is seeing a rise in violence, it is a result of worsening social conditions, economic struggles and instability, which can and should be addressed through social support systems. If the mayor was actually serious about addressing rising crime, he’d invest in mental health care and widespread drug treatment programs; he would house all the unhoused and ensure living wages for every New Yorker. But instead, Adams wants to put 16 year olds in prison and more cops on the street.

Rather than addressing the material problems that lead to violence, Adams is making them worse. His Department of Education just announced a five-day quarantine for K-12 students with no negative Covid-19 test needed to return to the classroom, effectively ensuring that more and more students and education workers will be exposed to the virus. He still hasn’t taken action to hold the slumlords responsible for the Bronx fire — largely because one of them is on his housing team, and he has raised $1 million with the help of real estate interests. Instead, the FDNY created a PSA asking individuals to “close the door,” featuring Eric Adams’ speech in which he seems to lay the blame on the victims and disregards the bill sponsored by Congressman Richie Torres that mandated self-closing doors for all residential buildings by mid-2021.

As Mayor, Adams has been just as corrupt and pro-cop as many expected. But, his attacks on working people and people of color aren’t just the result of his own moral and political failing — they are part of a coordinated effort by the Democratic Party to rebuild the legitimacy of the police after the Black Lives Matter movement. The fact that Adams can get away with this reflects the significantly diminished class struggle in New York. Adams and his allies in the NYPD are able to roll back these reforms because they think they won’t face serious resistance. And, as of right now, they seem to be right — there have been no significant mobilizations against Adams.

In order to protect the most vulnerable New Yorkers, that has to change.

Activists and organizations across the city — including the Democratic Socialists of America (DSA), who have their largest chapter in New York — must mobilize to build a movement against Adams. His proposals would meaningfully increase the repressive power of the NYPD, making it easier for them to target and punish anyone who they deem a problem — especially people of color. Further, we must fight for fully-funded mental health services, a living wage, and homes for all unhoused people. Adams will say there is no money, but we know that’s a lie: the cops get $6 billion a year and we live in one of the wealthiest cities in the world. These demands will mean a fight against both Eric Adams and the Democratic Party of New York, neither of which provide solutions for crime or the health and social problems affecting the city.