NYC Nurses in Struggle Against Hospital Managers – and Against Union Bureaucrats

On Wednesday, the panel, “Reflections & Lessons from the Nurses’ Struggle” took place in Manhattan. Six nurses—a seventh appearing by videochat—recounted their experiences in fighting for good contracts and union democracy. A group of union bureaucrats made a scene. 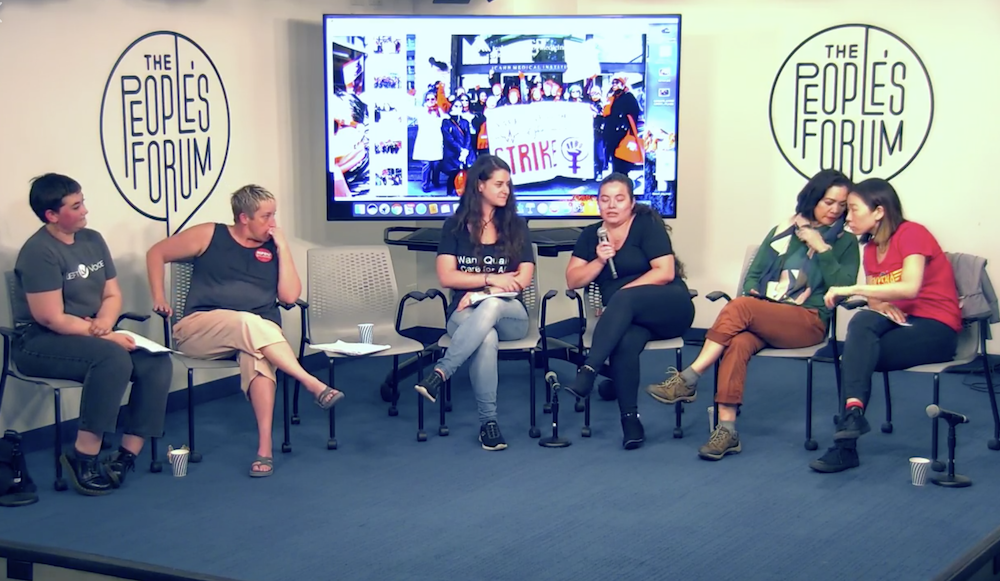 “Shame, Shame, Shame” It was to this chanting that a handful of union bureaucrats from the New York State Nurses Association (NYSNA) stormed out of the People’s Forum on Wednesday night in Manhattan. They had attended the panel “Reflections & Lessons from the Nurses’ Struggle” and apparently did not like what they heard. Of course, they did not leave quietly. Instead, they tried to instigate a fight by calling the panelists—a group of seven rank-and-file nurses representing hospitals from Plattsburgh to Manhattan and from the public and private sectors—liars. Why? Because they were discussing their experiences and struggles as militant nurses.

The panel had been organized by Left Voice alongside the NYC DSA Labor Branch, the NYC DSA Socialist Feminist working group, and Red Bloom. Six nurses spoke on the panel, with a seventh appearing by videochat.

“Ran through many obstacles … and not all from the employers”

The first nurse on the panel was Bobbi-Jo Otis, a 16-year veteran of Champlain Valley Physicians Hospital in Plattsburgh, NY, and co-chair of the Nurses and Professionals for a Democratic Union. In seven minutes she outlined how she and her coworkers had fought since 2012 and won some of the best patient-to-nurse ratios in the region. However, anything won can be lost again, and during the last contract negotiations the hospital went on the offensive. The bosses demanded concessions in staffing ratios and workers’ healthcare benefits. The rank-and-file nurses were willing and ready to fight like hell to keep what they had won.

At this point, the union bureaucracy began to sabotage the struggle. The well-respected local union representative was forced out, funding for needed campaign material was frozen, Unfair Labor Practice grievances and arbitrations were discarded with no explanation, and the union misleadership settled on the slogan that the concessionary deal in front of the nurses was “the best you’re going to get.” After an exhausting ten-month fight, the nurses’ Executive Committee, worn down and demoralized, accepted the company’s contract. And though promises were made that a contractual grid system and established advisory committees would protect staffing ratios, that turned out to be a thing of fairy tales.

In conclusion, Bobbi-Jo reiterated the importance of concrete staffing language in contracts.  Her story illustrated the danger of betrayals by an entrenched union bureaucracy and the need for greater democracy in the union.

“Maybe our union is not what we think it is”

Diana Torres, a nurse from Mount Sinai West and elected member of the hospital’s Executive Committee, was next to speak. She went through the recent contract negotiations at the Big Four hospitals that ended some weeks ago without a strike and with a compromised contract. She explained how the union staff handpicked which members of the negotiating teams would continue bargaining in other rooms while others were left in the lurch.

Beyond this filtering of information, the staffers also removed individuals from the various nurses’ Facebook groups and generally went on a campaign of censorship against the most militant nurses. Torres ended her contribution declaring that the nurses are “going to have to do it on our own” to win the working conditions they deserve.

“Obstruction from our own values”

Kelley then went on to explain the working conditions she deals with on a regular basis and how she and her coworkers are stuck in a bind: they want to go public with the horrid conditions in the hospitals but also do not want to weaken one of the few safety nets for poor people in the city. The solution to this is—of course—universal healthcare and far greater funding into the system.

Lillian V. Udell, a nurse from Lincoln Hospital, explained that Universal healthcare is a solution that is being hindered in part by the union leadership’s love for Governor Cuomo. They paid him $64,000 in endorsements, even though he opposes single-payer healthcare and other badly needed reforms. And so, Lillian asked, where are the dues going? To this author, $64,000 would seem to be a useful contribution to the contract struggle.

Tre Kwon, an ICU nurse at Mount Sinai, closed the panel with her views of how the union bureaucracy so “utterly failed the test.” In her estimation, there are around 100 staffers for the union,and this structure exists in parallel to the elected committees. She also said that there is a big gap between union officials and members.

The fight for union democracy is essential to confront the bosses with greater vigor. This also means that workers must fight for class independence and rely on their own organizations and strategies, and never on the Democratic and Republican parties. The most militant nurses should organize to put forward a political vision, and that vision is a socialist society in which the economy is reorganized to meet human needs, including the need for good jobs and decent health care.