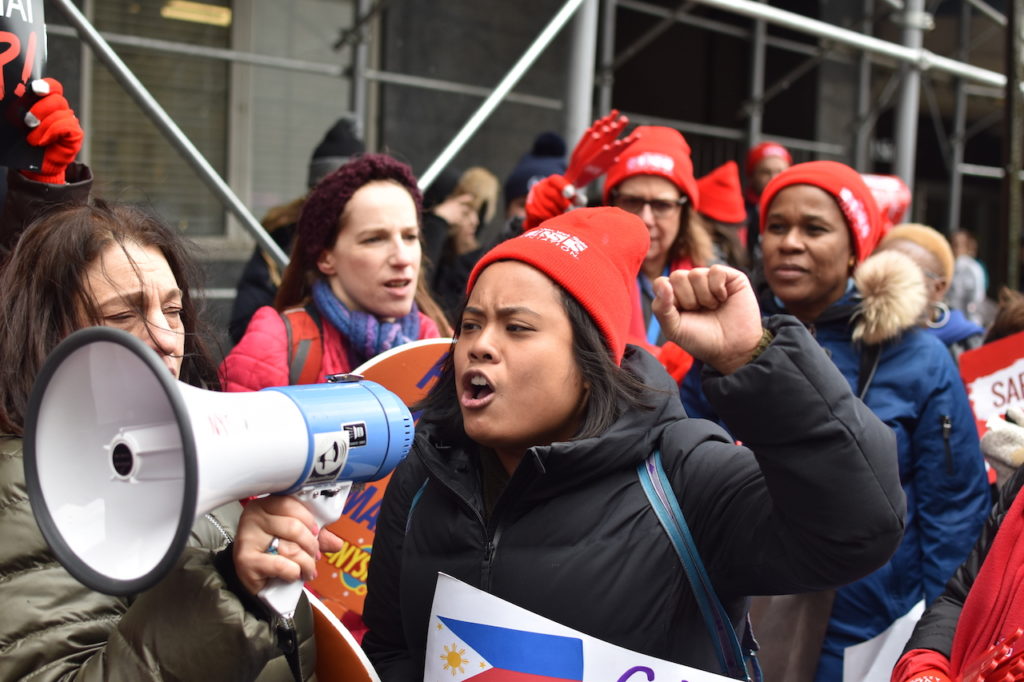 Last week, nurses organized by NYSNA (New York State Nurses Association) in four private hospitals across New York City voted overwhelmingly to authorize a strike. Of the nearly 9,000 nurses who voted, 97% were in favor of a strike, expressing nurses’ widespread dissatisfaction with conditions in some of the highest-grossing hospitals in the city: Mount Sinai, Mount Sinai West and St. Luke’s, NY Presbyterian-Columbia and Montefiore Medical Center.

The strike authorization vote comes on the heels of dozens of demonstrations for safe staffing ratios and a fair contract. On February 13, thousands of nurses and supporters picketed to raise awareness of their negotiations and the fight for safe staffing in hospitals facing chronic understaffing, increasing patient acuity and closures.

If NYSNA decides to go on strike, 10,000 nurses will withhold their labor to protest the grueling working conditions affecting the majority of nurses in the city, most of whom are women, many of whom are immigrants and women of color.

The central issue nurses are negotiating in this contract is the problem of staffing. Nurses are forced to work under incredibly unsafe staffing ratios; one medical-surgical nurse can be assigned 6, 7, or even 8 patients. And, in the poorly conceived “buddy system,” those numbers double when—and if—nurses take a break.

These numbers are unsafe for patients who, in facilities without safe staffing ratios, suffer longer wait times for pain relief, diagnosis, and imaging, as well as increased risks of falls, infection and even mortality. The nurses themselves are overworked, routinely cannot take breaks, and experience some of the highest rates of injury, assault and harassment on the job. Nurses are also fighting to negotiate paid breaks, wage increases to match inflation, and retiree healthcare benefits, among other demands.

Kyu Nam, a nurse in New York, wrote about her experiences at work. She describes nurses’ desperation as they try to make it through each day and provide the best care possible, despite being under conditions of physical and emotional duress and never being able to support other nurses or provide patients the healthcare they deserve. She wrote:

“The overwhelming demands of the job don’t give us much breathing room to jump in when someone else is in the weeds. It forces us to get tunnel-visioned. We all know teamwork is necessary, but oftentimes we come out looking more like lone wolves calling out into the wild: ‘Anybody out there? Can someone help me?’ The real beast ripping into our flesh and breaking our backs are the hospitals and healthcare system itself. I reach a point almost every shift where I tell myself, ‘This is insane. We need more support. I hate this shit.’”

In response to the negotiations and the recent actions protesting working conditions, hospital executives sent emails to employees saying safe staffing ratios “would devastate our patient-first staffing approach,” arguing that “One size does not fit all.”

These lies are nothing but corporate excuses to maintain the inhuman hyper-exploitation of New York’s nurses and shows that nurses are the only ones truly protecting their own and their patients’ interests.

Hospital executives have for years raked in millions from the extremely lucrative industry of profiting from the sick. Just last year, a report in Crain’s New York Business said that Mt. Sinai, one of the hospitals where nurses voted to strike, had an operating profit increase of 28%, reaching $205.2 million in 2018.

In this sense, the nurses’ struggle is a struggle against both austerity measures and record profits by the healthcare industry and insurance companies. Fighting against a common enemy—the profit motive driving healthcare—is directly connected to the fight for Medicare for All. As nurses fight for control of their working conditions, the struggle for safe staffing ratios and the mobilization of nurses is a direct challenge to the bosses.

As the four hospitals involved are private hospitals, a strike would not violate New York’s infamous Taylor Law, which bars strikes by public sector workers. However, NYSNA, which covers both public and private sector nurses, voted just a few months ago to fight to repeal the Taylor Law, sparking other unions, such as CUNY PSC, to follow suit.

If these hospitals go on strike, they will be part of the major strike wave sweeping the country since last year. Teachers around the country have organized walkouts and strikes, breaking non-strike clauses and often defying the union bureaucracy which discourages them from striking. Hotel workers also organized strikes around the country, as did nurses in places like Providence, Rhode Island  and Burlington, Vermont. These strikes, which have occured in predominantly female areas of the workforce, are beginning to revive the tradition of strikes in the US.

As a nurse participating in the pickets last month put it: “How are we expected to make our patients feel safe and secure in the delivery of our care, if at times we ourselves don’t feel safe in our practice?”

As the possibility of a strike draws nearer, nurses will need solidarity from the broader community. Already, representatives from the Professional Staff Congress (PSC), UNITE HERE Local 217, the New York Hotel Trades Council (HTC), the Committee of Interns & Residents (CIR), GABRIELA New York, the Democratic Socialists of America (DSA), and the New York Professional Nurses Union (NYPNU) have attended pickets organized by nurses. The Socialist Feminist Working Group of the DSA promised to donate to strike funds and walk the picket line with nurses, and they put out a statement in support of the nurses’ fight.