NYC Students Are Back to School Today. It Is Still Not Safe.

Last Thursday, the New York City Department of Education announced that school reopenings will again be postponed for some students. Some of the city’s most vulnerable students, however, are being sent back to school today, even though the school buildings are still not safe. A teacher reports. 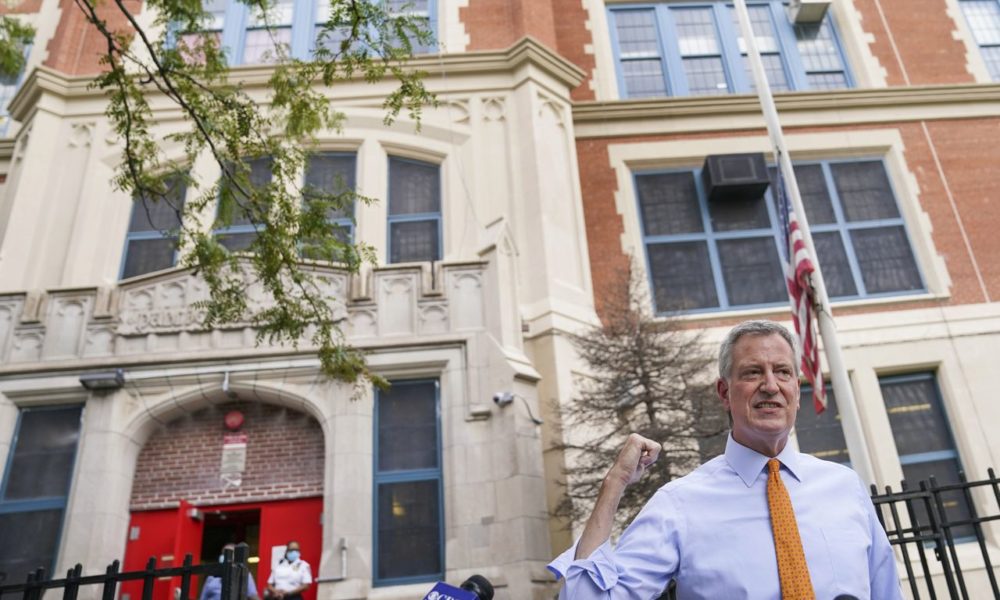 Teachers this year experienced an especially frightening return to the chronically underfunded Department of Education (DOE) facilities that have needed thorough cleaning and repairs for decades. As Mayor Bill de Blasio, Chancellor Richard Carranza, and the rest of the city administration are continuing to bulldoze their way towards a reopening without anything resembling adequate safety conditions, the DOE told parents with callous bravado: “There’s a back-to-school energy in the air as all over the city, educators, students, and families are getting ready for the school year to begin.”

On September 1, the United Federation of Teachers (UFT) announced it had made a backroom deal with the DOE. The UFT Delegate Assembly was scheduled to vote that day on whether to authorize a strike vote since the city was refusing to address safety concerns, and no one in leadership asked any teachers for input on what the union’s safety requirements should be. Instead, UFT President Mulgrew shook hands with Bill de Blasio, agreeing to send teachers back into buildings on September 21 (a delay of less than seven school days), promising to stay vigilant and “insist” that the DOE would uphold its part of the agreement to provide the PPE and ventilation repairs it had promised over a month before.

School staff returned to school on September 8, and teachers — who had voluntarily taken Covid tests the week before, having been promised “expedited results” that didn’t arrive for several days — began to report positive test results that afternoon. But the city refused to close the schools and let the staff members quarantine. It also refused to release any information about the number of cases, and teachers and staff had to depend on direct reports from their co-workers. City contact tracers took days to get in touch with teachers at the schools where positive cases were reported.

The numbers grew. By September 14, unable to continue to hide the numbers, de Blasio finally said that there were 55 cases of positive test results reported by teachers who traveled to test centers. “It has been left up to the discretion of staff to get tested and ultimately to report positive results to school principals, meaning that there are probably many Covid-positive teachers in our school sites,” said the teachers at MS 88, one of the first schools to report a positive case.

Sounding more and more like Trump, de Blasio said in a lackadaisical downplay of the danger of a virus that has killed more than 23,000 New Yorkers and left many thousands more with permanent health damage: “We have to remember that for the small percentage of people who test positive it is a very temporary reality.” De Blasio seems to have forgotten that death is permanent.

Parents and Teachers Fight Back

Protests had already started. The morning of de Blasio’s press conference, the MORE caucus of the UFT had held a day of action at two NYC schools. “We’re just a few days into the school reopening plan negotiated by the Mayor and UFT leadership, and it’s already clear our communities are in danger… Staff returned to buildings with sinks, windows, toilets still broken, without PPE and without adequate staffing for the hybrid model,” said a MORE press release.

On Thursday, de Blasio and Chancellor Richard Carranza announced that specific groups of students will have delayed school reopenings. While 3K and Pre-K programs and all District 75 schools (specialized schools serving children with high support needs) will be opening on Monday as planned, the rest of the city’s students will come back to school the following week — with the implication that this is enough time to fix the myriad of issues reported at these schools. “We have worked with our labor partners on a new staggered start for in-person learning at the beginning of this school year,” Chancellor Carranza told DOE employees.

Given the deplorable state of District 75 schools reported by the teachers and the Daily News — and the fact that they serve the city’s most medically vulnerable students — the decision to rush them back to school is an incredibly dangerous one. The schools in which hygiene and PPE will be most crucial and in which staffing levels are most crucial will not get any extra time or extra resources to help with reopening.

Teachers on social media have reported filthy buildings, a lack of PPE, and poor airflow, an especially important protection against an airborne virus. The city tested the efficacy of HVAC systems with a piece of toilet paper attached to a yardstick. Custodians’ overtime was eliminated, ostensibly due to budget cuts, and they are being asked to add repairs and electrostatic spraying to their usual jobs responsibilities — after a decrease in pay.

This reveals the motivation behind the refusal to put any effort into a safe reopening — and it’s a purely economic one. It reflects the priorities of a city and state government that allows massive cuts to public school budgets while refusing to cut spending on a racist police department. Education is regularly the first thing on the chopping block, and New York would rather spend money on cops than building repairs, basic supplies, full libraries, and lowering class sizes to a pedagogically appropriate number. While the shortchanging of public schools is not new to the children of NYC, it is being intensified even as the city professes to care about “serving the children” of the city.

According to the “blended” model of instruction created by the city, students who return to in-person school will be attending one to two days a week. The other three to four days, they will be learning from home. And while the city initially told parents their children would be receiving live online instruction on the days they were not in school (a plan that would require an extra 10,000 teachers to be hired by the first day of in-person instruction), they rescinded this promise on Tuesday, announcing that this would no longer be possible — a predictable shift considering their determination to maintain a lack of funding for schools. And backtracking on his own backtracking, Mayor de Blasio announced he would begin hiring 2,000 more teachers to supply live help for blended students, an inadequate and ridiculous promise to make just a few days before school is scheduled to begin.

Having lost faith in and patience with this complete lack of stability, more and more parents are choosing to keep their kids home. The last numbers were released on Monday, and before the announcement, 42 percent of parents had already officially opted for full remote, with many more joining them after Tuesday’s announcement.

UFT Leadership: Too Little, Too Late

The city’s willingness to delay the reopenings yet again is most likely a result of the high numbers of grassroots protests by teachers and the consistent, public demonstrations of the city’s apathy and utter incompetence. De Blasio’s callous bravado was no match for the embarrassing lack of will and ability to provide needed services for students and safety for teachers and their classes.

But the DOE also benefits from this chaos and disorganization, as each of the changes in instructional procedures and scheduling have caused increasing numbers of parents to opt their children into the remote-only learning plan. The more parents do this, the easier it will be for the city to pretend it can reopen safely and effectively; it will also be easier to quietly increase remote class sizes, allowing for a return to the chronic understaffing that has been characteristic of the DOE for decades.

However, instead of ramping up the fight waged by teachers against the DOE, UFT leadership’s response to the situation so far has been almost entirely capitulatory. Backing down from a strike vote was extremely damaging to the morale of teachers citywide, and it sent the clear message that it takes no more than a half-promise to tame the city’s largest municipal union.

Instead of striking, the union opted for scolding the DOE and collecting paperwork from Chapter Leaders in schools, relying on already overworked and anxious members to inspect their school buildings themselves and engage in “reporting” the violations to the union. So when protests by the rank and file and city mismanagement caused another postponement, Michael Mulgrew and the Unity Caucus immediately took credit.

In an email to members, Mulgrew said: “Thanks to your advocacy, we now will have a responsible, phased-in reopening for schools. The mayor has agreed that the city needs more time to address the staffing and safety issues exposed by UFT chapter leaders and members across the city.” The email is peppered with things the mayor has “promised” and “announced,” but no mention was made of any contingency plans for what the union leadership will do when, not if, the city reneges on its promise yet again. After informing teachers that they are still required to report to their school buildings — even though they will be working entirely remotely for the next week — Mulgrew stated: “Now we must turn our focus to delivering the best possible education to our students under these extraordinary circumstances.” Translation: We’re done fighting. Now do as you’re told.

In one of the most egregious examples, the city has repeatedly refused to allow medical accommodations for teachers with immunocompromised family members to teach online, and the UFT leadership has repeatedly accepted this refusal — Mulgrew has stated in teacher town halls that, “We’re trying but can’t make any promises.”

Given this incredibly weak stance in the face of such danger to the lives of kids, families, communities, and even its own members, it’s especially galling that the leadership of the teachers’ union would claim this completely insufficient and ineffectual measure as a “victory.” It was especially tone deaf considering the confusion and frustration the day’s announcement caused kids, families, teachers, school staff, and administrators. The UFT’s responsibility is to teachers, students, and families, and this endorsement of a dangerous plan makes UFT leadership complicit in the health crisis to come.

It remains to be seen whether enough parents will finally become so fed up with the constant, anxiety-producing changes to education plans and lack of city precautions to force the DOE to announce fully remote learning until the city is willing to increase safety measures. But for teachers walking into the future epicenters of the second wave of the virus, an organized rank-and-file fightback is crucial.