NYC’s Medusa Statue and the Failure of “Carceral Feminism”

Luciano Garbati’s recently unveiled Medusa With the Head of Perseus is supposed to be an homage to the #MeToo movement against sexual abuse. However, by every measure this statue misses the mark and shows a complete lack of understanding of the causes of and solutions to sexual violence. 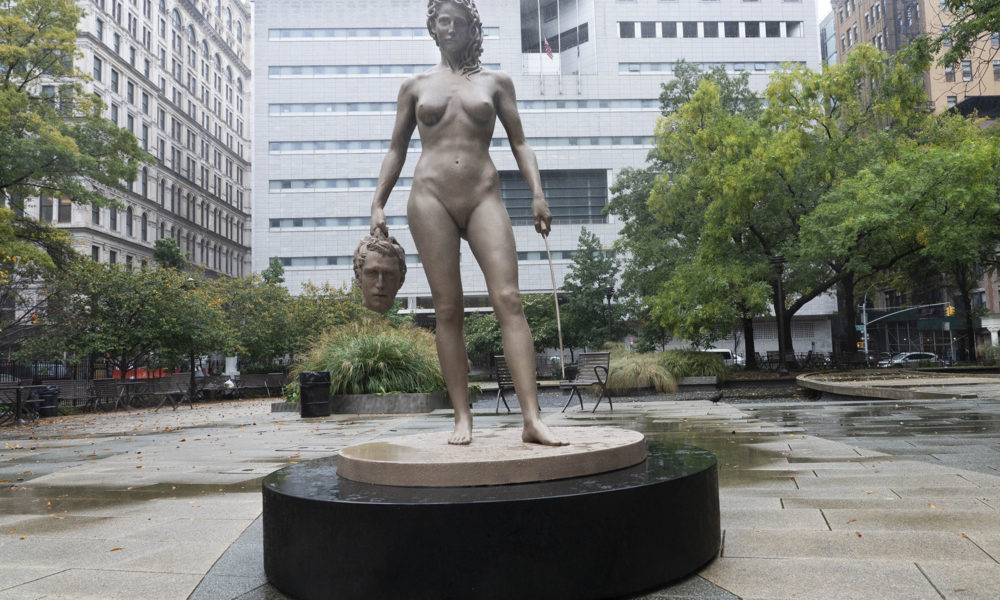 Two weeks ago, a new statue appeared in Collect Pond Park, across the street from NYC Criminal Court. The larger than life size statue, which depicts the Greek mythological figure Medusa holding a sword in one hand and the head of Perseus, who killed her in the original myth in the other, is intended to be an homage to the #MeToo movement. The sculptor, Luciano Garbati, stated that his 12-year-old statue was “icon of justice… in a moment of somberly empowered self-defense.” He went on to say it is “a symbol of justice for many women,” and noted that its location “is not accidental, since there they judge cases for crimes related to violence against women.”

Turning to the statue’s placement, the location, in front of New York City’s main criminal court, is purposeful according to Garbati, as he and those who helped place the statue seem to be under the misapprehension that this is a site of power and healing for survivors of sexual violence. This insulting and harmful misunderstanding couldn’t be further from the truth, as the United States carceral system is not and has never been a site of resolution or justice for violence against women or people of any gender, but instead has created, encouraged, and, at best, ignored such violence. If we wish to truly end sexual violence, we must fight for the abolition of police and prisons, not their glorification and praise.

As far as the actual statue is concerned, Medusa in Garbati’s imagining has the body type of a contemporary fashion model- flat, perky, and hairless. Hilariously and childishly, a sculptor who claimed to be making an artistic statement about female power couldn’t even bring himself to sculpt labia, instead leaving his creation with a prudishly Barbie-like and entirely smooth groin. “Something in the sculpture has been captivating women’s attention, which means that I have been able to capture in it some aspect of the feminine pathos,” Garbati told Artnet News. Without getting too Freudian, it’s a man’s fantasy of feminine pathos, with none of the humanity, complication, or imperfection of an actual woman. Mostly, the statue just comes across as artistically boring, irreparably hobbled by a terminal case of male gaze.

Moreover, it’s a bit muddy what statement Garbati was attempting to make. First of all, he appears to misunderstand the Greek myth he takes inspiration from, choosing to do a flat swap of the figures which appear in Renaissance artist Cellini’s Perseus With the Head of Medusa. As many have pointed out, if Garbati wanted to make a real statement about a woman taking revenge against her rapist, she’d be holding the head of Poseidon, who raped her in the original myth. If Garbati wanted to make a statement about a woman standing up to a society which condones rape yet punishes women for surviving it, she’d be holding the head of Athena, who punished her for being raped in the original myth. Instead, he chooses to individualize sexual assault, as if it weren’t a systemic problem of a society build on sexism and patriarchy. Any woman individually taking vigilante vengeance on any man is good enough in Garbati’s imagining. As Burke points out in her Instagram post, “This statue doubles down on the idea that this Movement is about hunting down men[…] Medusa was raped by Poseidon but she’s holding the head of Perseus. None of it is right. This isn’t the kind of symbolism that this Movement needs.”

Even if the artist had been skilled enough to make the point he intended to, about “empowered self-defense,” he would entirely miss the true causes of and solutions to sexual violence. While sexual violence is deeply personal, it is not a private harm with solely individual causes. It is not the responsibility of individual survivors to stand up to their abusers, even if they were able to. As Burke writes, “It also ties our healing to revenge and casts the semblance of justice that comes from the judicial system as retribution as opposed to accountability,” thus playing into the hands of misogynists who believe anti-rape advocacy and the ongoing search for accountability for abusers is an irrational harpy’s revenge campaign. Moreover, a survivor standing up to their abuser, while it may be cathartic, helpful, or a wise choice for that individual, is not enough to overturn the systemic issues at hand.

Sexual assault victims are overwhelmingly not men, while perpetrators are overwhelmingly men, not because of something inherent to gender, but because we live in a society where men are constantly told, explicitly and implicitly, that they have power over people who are not men, and that people who are not men are theirs to do with as they please. And patriarchy is not just interpersonal; it has structural roots. Sexual assault is the next link in a chain of ways women are degraded and discriminated against in a capitalist society- from unpaid domestic work, to institutions like the Supreme Court which try to take away choices about their own bodies for people with uteruses. This undervaluing of women allows capitalists to profit from their unpaid or underpaid labor. Sexual and intimate partner violence is an effective form of labor control, ensuring that women’s bodies remain a site of profit. This is especially true of Black and Indigenous women, populations against whom longstanding and systematized sexual violence has been used as a method of terror, control, and profit for as long as the United States has existed.

Thinking about the racial aspect of sexual violence in the United States makes even more clear how much this statue misses the mark. The excuse of a necessity for vigilante revenge against people, mostly Black men, accused of perpetrating assault against an idealized white woman, such as the one depicted in Garbati’s statue, has led to centuries of horrific violence against Black people. Thus in context, the symbolism of an individual woman taking violent revenge is not only useless, it’s deeply harmful.

Finally, many survivors are not able to stand up to their abusers, especially survivors of the kind of workplace abuse that the #MeToo movement has attempted to shine a light on. All too often, survivors rely on their abusers materially, for continued employment, for housing, for access to healthcare, for the safety of their children. Even survivors who do not rely on their abuser for their material needs face an extreme power imbalance, with a society and a justice system that are predisposed to believe their abuser and shame them. The most powerful men in the United States, from President Trump to his Democratic opponent Joe Biden, not to mention at least two Supreme Court Justices, are serial sexual abusers. The copious evidence of their abuse has done nothing to keep them from the most powerful positions in the world. This is the reality of a society where a person’s worth is determined by the money, influence, and power they have. The problem is a capitalist society based on patriarchy. The solution is not for every woman to grab a sword and simply get the guts to behead abusive men. Instead, we must attack the problem at its roots, and get rid of capitalism, which is upheld by and upholds all forms of oppressive hierarchy, from patriarchy to white supremacy.

Following the unveiling of Medusa With the Head of Perseus, a collective of feminist artists with these critiques of the statue tried to think about what a piece of art that attacked capitalist patriarchy and its corollary, carceral feminism, would actually look like. By draping the statue in a banner that said “Eat The Rich” and replacing Perseus’s face with that of Amazon CEO Jeff Bezos, they recontextualized the statue, turning away from the male gaze, focusing on the true meaning of its location, and pointing the finger at the actual causes of sexual violence- capitalism, patriarchy, and all forms of hierarchy. 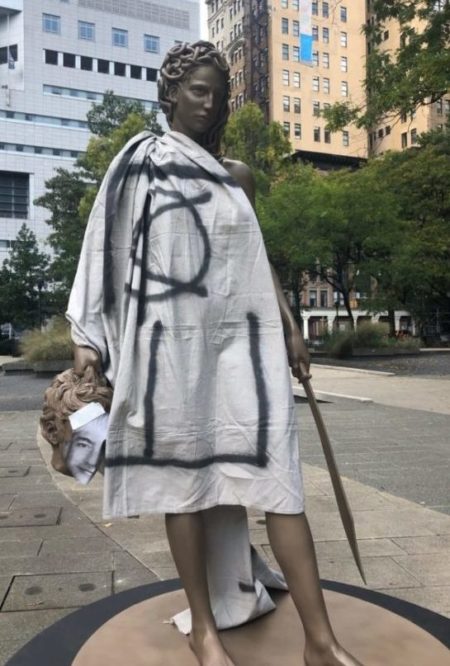 In a statement, the artists said:

This week, a statue of Medusa holding the head of Perseus was unveiled outside NYC Criminal Court at 100 Centre St. Today a group of feminist artists offered their critique of the statue. The sculptor claims that his naked sexualized statue of Medusa is meant to support the #MeToo movement, a movement that empowered survivors of sexual violence in the workplace. However, to end sexual violence and exploitation in the workplace and everywhere, we must not rely on the carceral state, which creates sexual violence instead of stopping it, and instead remove hierarchy and the systems of capitalism that perpetrate it. Jeff Bezos is one of the most powerful capitalists in the world and the company he runs abuses all workers, including women, and instills a hierarchy that allows for sexual exploitation at all levels.

While Garbati was off in his reading that Perseus was an appropriate symbol for all abusers, Jeff Bezos is the perfect emblem of rapacious capitalism, heading one of the biggest companies in the world, and one that is famously exploitative of and harmful to its employees of all genders, and specifically has a terrible track record on sexual harassment in the workplace.

These artists understand that capitalism, with the power imbalance and desperation it causes, the way it puts a price tag on all human beings, and splinters our relationship to each other, and the carceral system, which answers poverty with violence, and trauma with more trauma, are the causes of sexual violence. They know that it’s not about individual women becoming #GirlBosses and standing up for themselves, and it’s definitely not about a man’s illusion of carceral feminism as liberation. It’s about dismantling a system that makes exploitation and harm inevitable and unanswerable. 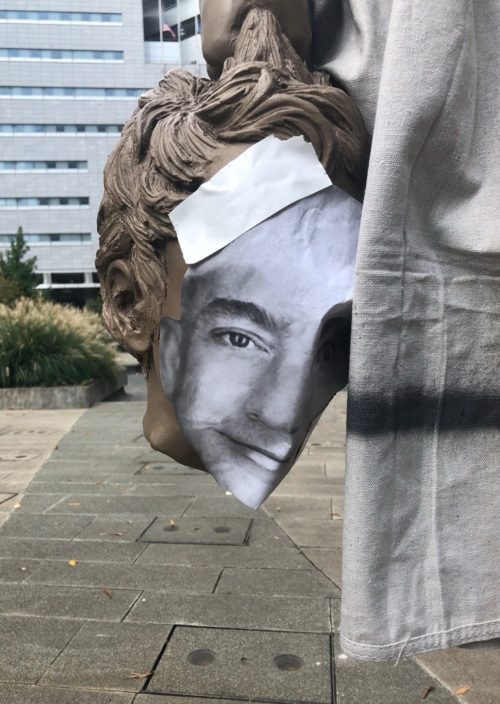