NYPD, Apology for Stonewall Not Accepted 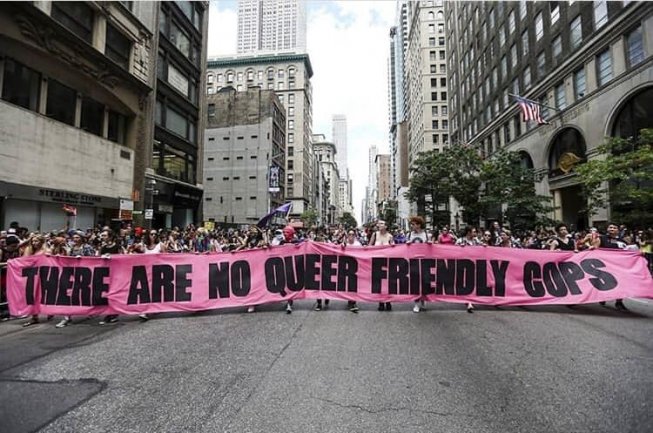 What the NYPD did in Greenwich Village on June 28, 1969 was not an exceptional event. There was nothing new about cops busting up a queer bar, beating people up and putting them in police cars. In 1969, that was commonplace. Every queer person knew what the red flashing lights meant: arrest, getting beaten or perhaps raped. What was unique on June 28, 1969 was that queer people stood up and fought back, not only for that day but for four days afterwards, in what became known as the Stonewall Riots. This uprising and the plethora of organizations that emerged afterwards were the birth of the modern LGBTQ+ rights movement.

50 years later, Pride parades have become a corporate rainbow extravaganza, including Bank of America, Verizon and Target contingents. In a complete denial of Stonewall’s history, police hypocritically march in the parade. This radical history has become so sanitized that the police finally feel comfortable apologizing for their role in the oppression that led to the riot.

In a public statement on Thursday, New York City Police Commissioner James O’Neill apologized for the police brutality at Stonewall. “The actions taken by the NYPD were wrong — plain and simple. The actions and the laws were discriminatory and oppressive, and for that, I apologize,” he said. So, 50 years later, the New York City Police Department finally admits (vaguely) some wrongdoing in arresting and beating people who were just dancing at a bar.

I have one thing to say to that: NYPD, your apology is not accepted.

The scale and scope of the brutality the NYPD have unleashed on LGBTQ+ people is not the kind of thing that can be apologized away. In 1969, the police were the armed and repressive wing of a homo and transphobic society; the armed guardians of the closet. To the NYPD, it was not enough for LGBTQ+ people to have to confront the internalized hatred of our sexuality or gender, or the rejection of family and friends. The police made sure nowhere was safe; that the rituals around sex and love celebrated in films and songs were all but impossible for LGBTQ+ people to experience without fear. Impossible to buy someone a drink at a bar without fear of entrapment, or of the cops busting in to arrest and beat you. Impossible to walk down the street holding hands without fear, much less kiss. Working class people and people of color, of course, bore the brunt of this violence, which is why at Stonewall queer people of color were the first to start throwing bricks.

So no, James O’Neill’s short speech in no way makes up for the deep pain and violence caused by the NYPD. And his apology reeks of hypocrisy, as just two years ago when he was asked if he would apologize for Stonewall, he said, “I think that’s been addressed already … We’re moving forward.”

But that’s not the only problem. Apologies mean an intention to change. And the NYPD has no intention of changing. The NYPD remains the repressive arm of the capitalist state, enforcing all of the oppression and exploitation of this rotten system.

The Police Still Beat and Kill

Only a few months ago the ACLU filed suit against the NYPD on behalf of Linda Dominguez, a trans woman who was mocked, misgendered, placed in pink handcuffs overnight, and charged with “false personation.” Her crime: walking home.

In fact, 61 percent of transgender respondents in a 2015 survey in New York State reported that they had faced harassment by the cops. And a 2012 report of trans Latinas in LA revealed that 24% of respondents had been sexually assaulted by the police. It’s hard to believe the NYPD is any better.

In NYC, the police have robbed LGBTQ+ people of our public spaces, with the offensive against The Piers, which used to be a vibrant hangout for young LGBTQ+ kids, mostly of color. Thanks to curfews and hyper-policing, it has now become a highly gentrified and highly profitable space, free of the Black and brown fags, dykes and queers who used to hang out there.

And it’s not only LGBTQ+ people that the police terrorize, neither today nor in 1969. Despite brutally suffocating a man who repeatedly said he couldn’t breathe, Eric Garner’s murderer is not facing criminal charges. Currently, a court case is being held, but only his job is on the line. And he might not even lose his job because in America, the police can kill black people with impunity.

All of this police violence is connected; just because same sex marriage was legalized and the cops apologized doesn’t guarantee the safety of the overwhelming majority of LGBTQ+ people, who are working class, people of color and/or non-gender conforming.  New York City’s Reclaim Pride Coalition expresses it well:

“The NYPD Vice Squad is still in business, busting sex workers and others, while its members run their own brothels. The NYPD is still arresting trans kids of color for walking down the street, and arrested a transwoman in the Bronx who was walking home from work, holding her in custody for 24 hours, in handcuffs! The NYPD has spent decades entrapping gay men. And the NYPD continues to strike fear in communities of color and other marginalized communities.”

The capitalist system–and particularly the Democratic Party, is a co-opting machine. If a profit can be made, the capitalist system will find a way to integrate it. And that integration has occurred very quickly with LGBTQ+ people. 16 years ago “sodomy” was still illegal in 14 states and it was only 50 years ago that LGBT people would frequently have their names published in newspapers for the crime of not wearing gender-specific clothing. Today, all major corporations have rainbow gear for purchase: t-shirts, water bottles, sneakers, headbands, coffee mugs… everything. All of the major politicians have tweeted about LGBTQ+ rights, even Donald Trump.

As we celebrate LGBT Pride Month and recognize the outstanding contributions LGBT people have made to our great Nation, let us also stand in solidarity with the many LGBT people who live in dozens of countries worldwide that punish, imprison, or even execute individuals….

Kamala Harris, who notoriously opposed surgery for trans inmates in prison when she was a D.A. now has rainbow Kamala Harris t-shirts for sale and talks about LGBTQ+ rights.

And now, the police commissioner of New York is apologizing for Stonewall.

Without a doubt, this change in laws and cultural shift are a positive development for queer people. And without a doubt, these changes are a product of the brave activism and mobilization of people before us. There is nothing good about being brutalized on the margins.

But is the right for some of us to be desirable consumers, to be marketed towards really a measure of our liberation? Is the fact that those LGBTQ+ people who are white, male, cis and upper or middle class have mostly won the right not be brutalized, while trans women die in ICE detention centers, really a measure of our liberation? And to be clear, I’m glad that the level of blatant discrimination against LGBTQ+ people has waned and that we’ve won the right to marry, to have sex and frequent bars. But,while a handful of gay or lesbian people ascend to high positions in corporations, the majority of us are being hyper-exploited to provide the luxurious living of just a few.

The power of capitalism to co-opt is the power to divide us and integrate part of us into the system as responsible citizens and avid consumers, for some of us to continue to be marginalized and brutalized by the police, while others call them for “protection.” But the police are not here to protect us. Their function is to protect a system based on inequalities and born out of oppression.

Even winning formal rights in law won’t change that and won’t protect the most marginalized among us. As I argued in Rainbows on Their Cars But Blood On Their Hands: No Cops at Pride: “Just because oppressed people have rights in law does not mean that the system respects our lives. In fact, often the system provides oppressed people with formal equality (in law) in order to justify inequality; formal equality becomes a mechanism to justify the fact that we live in a society where most people struggle to make it while a small minority makes billions off of our misery. The rainbow police protect exactly this kind of society– a society of “rights” that can only be enjoyed by a small group of people, while the rest of us– poor, LGBT people, people of color continue to suffer daily violence.”

Reclaim Pride: Cops Out of Pride

Stonewall was an uprising: a day when those of us who had been so ashamed and marginalized lifted our heads and our fists. A day when we confronted the cops and the state for days on end and refused to be pushed out of the streets and into the closets.

Pride parades today have nothing to do with that combative legacy. Police contingents and corporations that hyper exploit us or foreclose on our homes, now march with rainbow flags. Increasing numbers of people are protesting this co-optation of pride, with pride disruptions around the country, and in New York City, an alternative pride march. In fact, in NYC the organizers of the Pride March authorized arrests of protestors.

Stonewall was the antithesis of respectability politics. It was the lowest of the low: queer people of color, rearing our head and striking back with anger. We didn’t lobby members of Congress or vote for the lesser evil. We didn’t phone bank or write letters to the police chief. We took the streets.

And we need to organize with that spirit today, against the police and against the capitalist system that profits so much from our misery. We should start with kicking the cops out of pride and sending a clear message to the NYPD: apology not accepted. Our fates are tied up in black kids you stop and frisk, in the Latino guy whose papers you asked for and the trans woman you harassed and mocked.

Apology not accepted NYPD, because you continue to beat, humiliate and lock up so many among us.

Apology not accepted NYPD, because you hold up a rotten system, one that increasing numbers of us want to destroy.