Since early this morning, the NYPD have been surrounding the house of a Black Lives Matter activist, attempting to take him into custody without a warrant. The protester, an organizer with Warriors in the Garden, has been resisting this intimidation and streaming the incident live on social media. 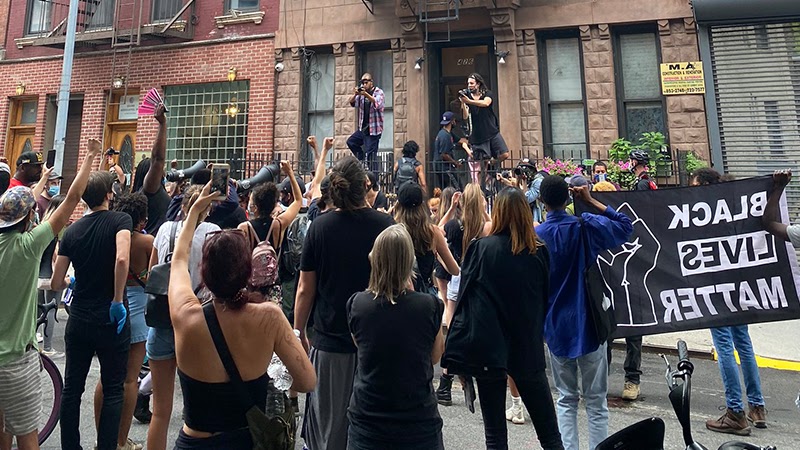 In the early hours of Friday morning, the NYPD surrounded the house of a peaceful protest organizer and Warriors in the Garden member (name still unknown) in Midtown Manhattan, beginning a siege that is currently still ongoing. The police arrived at the activist’s residence complete with riot gear and police dogs and had already occupied the rooftops of surrounding buildings before banging on the front door while covering the peephole. The organizer has been a visible face at ongoing demonstrations, leading from the front to denounce racism and racist police brutality. Today, they have been live streaming the interaction throughout the day. During the course of the livestream, the hundreds of those who tuned in to witness this harassment and intimidation noticed drones outside his window, evidently trying to gather evidence on his movements inside.

In response to the stream, over 100 people answered the call to gather at the residence and help defend the activist from police intimidation and act as legal observers to what is clearly an attempt at a violent and unlawful arrest. After what has now become an hourslong standoff, the police have still not produced an arrest warrant and have not stated why they are seeking to arrest the activist.

The hours-long standoff between NYPD and a single nonviolent BLM activist, who remains in his home and has not been shown a warrant, continues into the afternoon. https://t.co/67fnhGYe8R

This clear intimidation and harassment by the NYPD of a protest organizer is a targeted attack against those who have stood up and denounced the NYPD’s racist violence on the streets now for over two months. Such attacks, of course, are nothing new. From the revolutionaries in the Black Panther Party who were hunted down by the state to Black organizers now, who are at the forefront of one of the most dynamic movements in decades, the state continues to use its armed wing to target and intimidate activists in mass movements. We condemn this harassment of activists of the current Black Lives Matter movement, as well as the  political targeting and harassment of all activists by the police. This isn’t a flaw of the system; this is by design.

Update: Around 1pm the police left the area and supporters were able to move closer to the apartment as protection. The activists is still talking with their lawyers to discuss next steps.

This is a developing story