The NYPD has been steadily ramping up police presence in New York City’s subways, claiming that they are trying to reduce fare evasion. Unsurprisingly, this increase in police has coincided with a rise in police violence and the persecution of working class people, specifically people of color.  Several incidents of excessive force against fare evaders […] 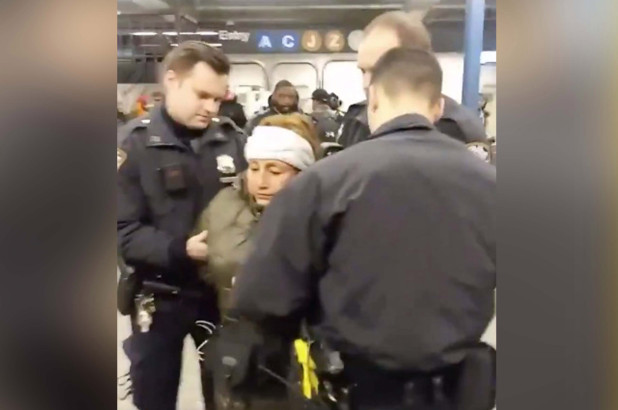 The NYPD has been steadily ramping up police presence in New York City’s subways, claiming that they are trying to reduce fare evasion. Unsurprisingly, this increase in police has coincided with a rise in police violence and the persecution of working class people, specifically people of color.

Several incidents of excessive force against fare evaders have already been reported and, within the past few weeks, the police have begun to target churro and candy sellers on the subway platform–NYPD arrested  two people just last month. These attacks go hand in hand with earlier attacks by police on young black men. Police officers were filmed punching two young black men in the face while bystanders yelled for them to stop. In a separate incident, 10 police officers stormed a subway car with guns drawn to remove a black man who had jumped the turnstile.

The deployment of more police in the subways is supposedly a solution to inadequate public transportation in NYC. The MTA is incredibly unpopular among New Yorkers. 70% of New Yorkers say that they view the MTA as either “not good” or “poor.” The city’s response to this situation has been to cut 2,700 jobs to save money while, at the same time, spending $249 million to hire new cops to crack down on fare evasion, which they claim costs them $200 million per year. MTA officials have finally begun to replace the archaic signaling system that is responsible for delays across the city, but they are doing so by criminalizing poverty. They blame fare evasion for the funding issues that keep ticket prices high and leave commuters stranded as they try to get to work.

The recent attacks against churro sellers prove, once again, that the rationale of putting police in the subways to reduce fare evasion is blatant criminalization of poverty, one that penalizes the working class and fails to address the root cause of the inadequacies of New York’s subway system. Putting working class Latina women in jail for selling baked goods does not make the subways safer or run faster. These attacks are just another attempt to repress the working class and continue the white supremacist capitalist system that keeps NYC and the rest of the country running. The increased militarization of the subway, as well as the MTA’s high ticket prices and its crumbling transportation system are more evidence that New York’s government privileges the interests of rich, white New Yorkers over the needs of the millions of workers–many of them people of color–who make the city run and generate massive profits for the country’s elites.

These moves are a concerning echo of the Guliani administration’s ‘broken window policing’ strategy of cracking down on petty crime. It seems likely that, if these arrests go unopposed, we could see this crackdown of street vendors extend outside of the subway to all of those who make their living by selling goods on the street.

The people of New York, however, do not accept the increased police presence in the subways. A few weeks ago, over a thousand people participated in a protest against NYPD and the MTA. The demonstration took on a more radical dimension when protesters began jumping turnstiles en masse. These protests will continue on Friday when protesters will once again rally to oppose the state oppression that is running rampant in our subways. New Yorkers should look to the example of Chile to see how much power the working class has when it comes to opposing oppressive changes in public transportation.

The youth of Chile responded to a recent fare hike by occupying subway stations and organizing mass fare strikes. When they faced harsh repression by the state, the rest of the working class of Chile joined them in the streets. The protesters have now been in the streets for a month and are showing no signs of stopping. That is what working class power looks like. We do not have to put up with police intimidation and the arrests of immigrant women selling food in the subway. We must fight for a safe, reliable, and free MTA. We must send a clear message to the city: the police do not keep us safe and they certainly do not improve the subways. Let’s get NYPD out of the subway:  Join us and others in the streets on Friday.