In Brooklyn on Friday evening, the NYPD drove two SUVs straight into a crowd of protesters, echoing violent scenes in Charlottesville in 2017. Mayor Bill De Blasio, a Democrat, continues to defend the police. 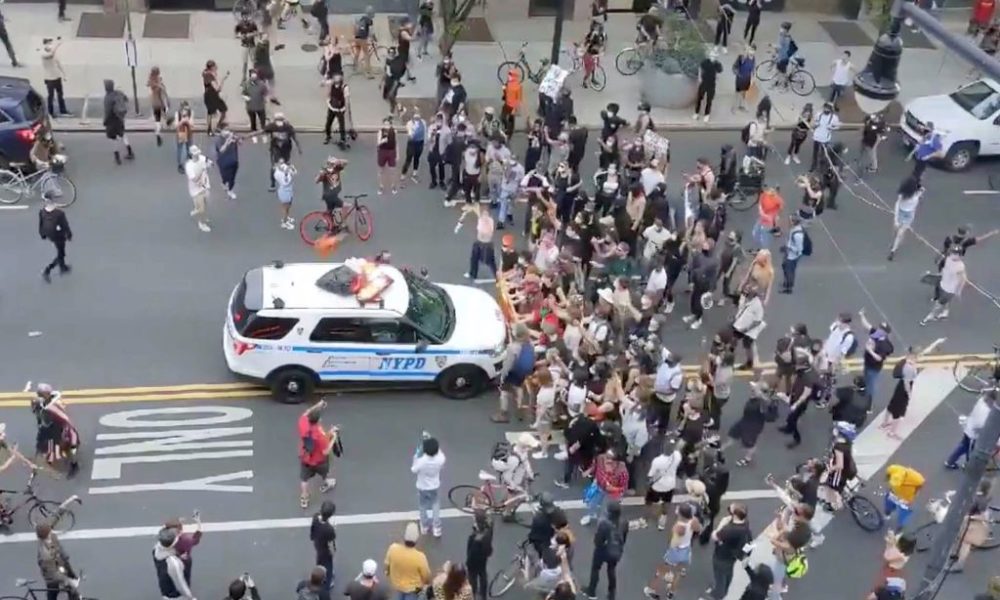 On Friday evening, the NYPD drove two SUVs into a crowd of protesters in Brooklyn. The incident occurred at the intersection of Flatbush Avenue and St. Mark’s Avenue while people were demonstrating against the murder of George Floyd in Minneapolis by police. A video shows a crowd of protesters throwing objects at the car and blocking its path with a barricade. Another police car pulls up behind the first one and accelerates directly into the crowd, despite there being ample space for both vehicles to reverse and retreat from the scene. It is not yet clear what kind of injuries they caused.

The horrifying video is reminiscent of the far-right rally in Charlottesville in 2017 where a racist plowed his car into protesters. He killed demonstrator Heather Heyer and injured 19 other people. Last night, it was the NYPD who employed this violent tactic, putting protesters’ lives at risk in broad daylight.

Mayor Bill de Blasio, questioned about the incident at a press conference on Friday night, defended the officers, saying, “I’m not going to blame officers who are trying to deal with an absolutely impossible situation… The folks who were converging on that police car did the wrong thing to begin with.” On Sunday he stated that a full investigation was needed, but only after saying that he saw “a lot of restraint” by the NYPD. Echoing the common narrative that police departments just include a few “bad apples,” Mayor De Blasio then said that he wanted to “make sure that anybody who should not be a police officer is not a police officer.”

Mayor De Blasio is firmly on the side of the NYPD, and does not stand with protesters against police brutality. The NYPD is a racist institution and a tool of capitalist oppression that cannot be reformed. It must be abolished, or else we will continue to witness horrific and violent events like those that occurred on Friday night.