The cops are with Trump. But Biden’s not their enemy. 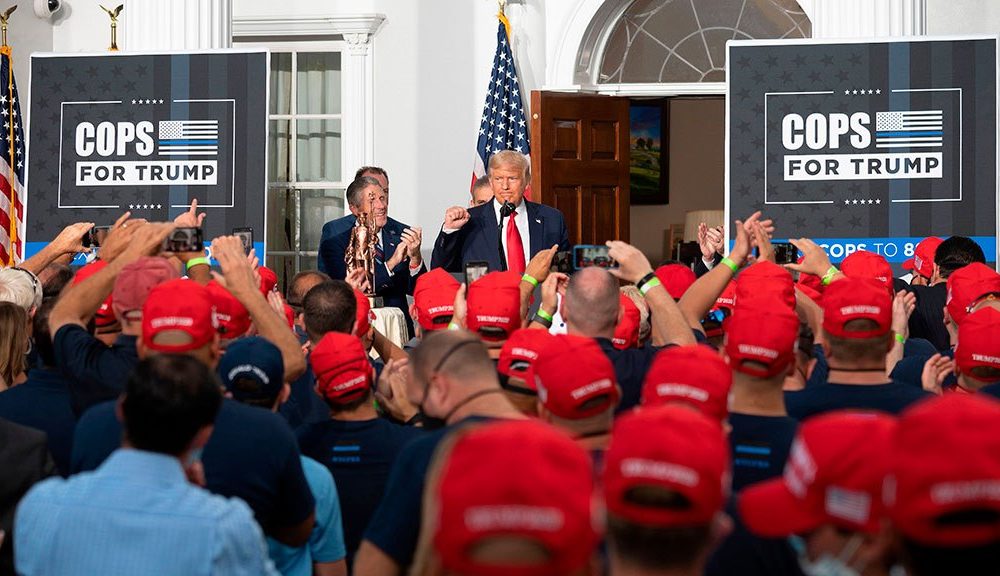 Last week, New York City’s cop union threw its weight behind Donald Trump’s racist, anti-worker bluster. Amidst ongoing protests against police brutality, Trump received the endorsement of the Police Benevolent Association (PBA), which represents more than 24,000 NYPD cops. With an additional flourish, the PBA delivered the endorsement at Trump’s New Jersey golf club, with union president Patrick Lynch emphasizing that the PBA hasn’t endorsed a presidential candidate in his 36 years with the union: “We’re fighting for our lives out there … We need your strong voice across the country … You’ve earned this endorsement. I’m proud to give it.”

This apparently unprecedented endorsement has been delivered in the midst of one of the largest social movements in U.S. history. The wave of anti-police protests, led by a multiracial youth vanguard, has brought to the fore demands to defund and even dismantle the police. And it has the support of most people in the U.S. The cops — and their so-called unions — are fighting back against this challenge.

Within this context, Trump has held firm to uncritical support for the police. In inflammatory remarks, he has called the protesters violent and stated that Black Lives Matter is ‘a symbol of hate.’ His racist rhetoric and policies and his authoritarian bent represent the most reactionary sectors of American capital and resonate with the white supremacist, anti-worker foundations and function of policing.

In his response to the endorsement, Trump declared that his agenda is “anti-crime and pro-cop all the way.” Despite countless videos of police brutality against protesters — and though the protests were prompted by a brutal video of Derek Chauvin choking George Floyd to death over the course of more than eight minutes — Trump pointed to an incident in which demonstrators dumped water on two NYPD officers as “one of the saddest things I’ve ever seen.” He called on police to retaliate against protesters, assuring them that as president he’d ensure they could do so with impunity.

Impunity is exactly what cop “unions” fight to ensure, shielding their members from accountability for harassment, beatings, and murder. They fight for legislation such as qualified immunity, and against any criminal justice reforms or any legislation that might subject them to accountability or impede cops’ use of force. And they endorse elected officials who will advance those interests.

Undoubtedly, Trump has “earned this endorsement.” But Joe Biden, Kamala Harris, and the Democrats are no enemy of the police. While the inherently authoritarian police bureaucracy feels more at home with the more brazenly racist, skull-cracking bravado of the right-wing, it should feel assured that Democrat Party candidates are just as certain to give cops and their unions free reign to repress Black and brown communities and the working class.

Joe Biden established himself as a “tough-on-crime” Democrat and helped write the infamous 1994 Crime Bill that bolstered mass incarceration. His running mate, “Top Cop” Kamala Harris, bragged about jailing the parents of truant children when she was the San Francisco district attorney (DA). As individual candidates, they have tried to cultivate cozy relationships with law enforcement; as a ticket, they’ll do so together — consistent with the Democratic Party platform. Under duress, the Democrats may throw bones to social movements (generally in the form of purely symbolic trifles) but they — no less than the Republicans — are a party of capital, which requires bodies of armed men to enforce and reproduce capitalist property relations. Both the Democrats and the Republicans can be expected to provide the cops with ample resources and immunity so they can continue to brutalize.

It is, however, telling that cop unions tend to find their interests best represented by the more reactionary wing of capital. Police unions have consistently refused to give an inch — even of the most symbolic, superficial nature — to any politician or movement that threatens to infringe on or even mildly question the bloodlust of the cops they represent. Kamala Harris, for example, consistently demonstrated loyalty to the police as a prosecutor, and was rewarded with the police union’s endorsement when she ran for San Francisco DA. However, after an on-duty cop was killed, the police were quick to turn their backs on her when she didn’t initially pursue the death penalty.

The police are the armed thugs of capital. Their so-called unions fight to grant them the “right” to brutalize with absolute impunity. They demand absolute deference to their authority. While they can largely expect that from the Democrats generally, the more liberal wing of capital feels under pressure to make (mostly symbolic) concessions to social movements that they seek to co-opt — a phenomenon that is happening right now. It comes as no surprise, then, that the PBA would align itself with Trump and his bid for reelection, even though the Democrats pose no real threat to cop unions.

While the PBA is independent, labor unions and federations — including the AFL-CIO and SEIU — actively organize cops within their ranks. Cops, though, are not workers. Their organizations have no place in the genuine organizations of the working class. Workers must fight to push these intrinsically reactionary, racist, anti-worker elements out of our movement and organizations. Just as they do on the streets, cops will advance their racist, anti-worker agenda in our unions. In our daily lives and in our fight against capital, cops are our class enemies.