As votes for the 2020 elections were counted for a third night across the country, protesters in New York City were met once again with violent repression by NYPD. Acting on the orders of Mayor Bill de Blasio, the police are cracking down on mobilizations to prevent a repeat of this summer’s uprising. 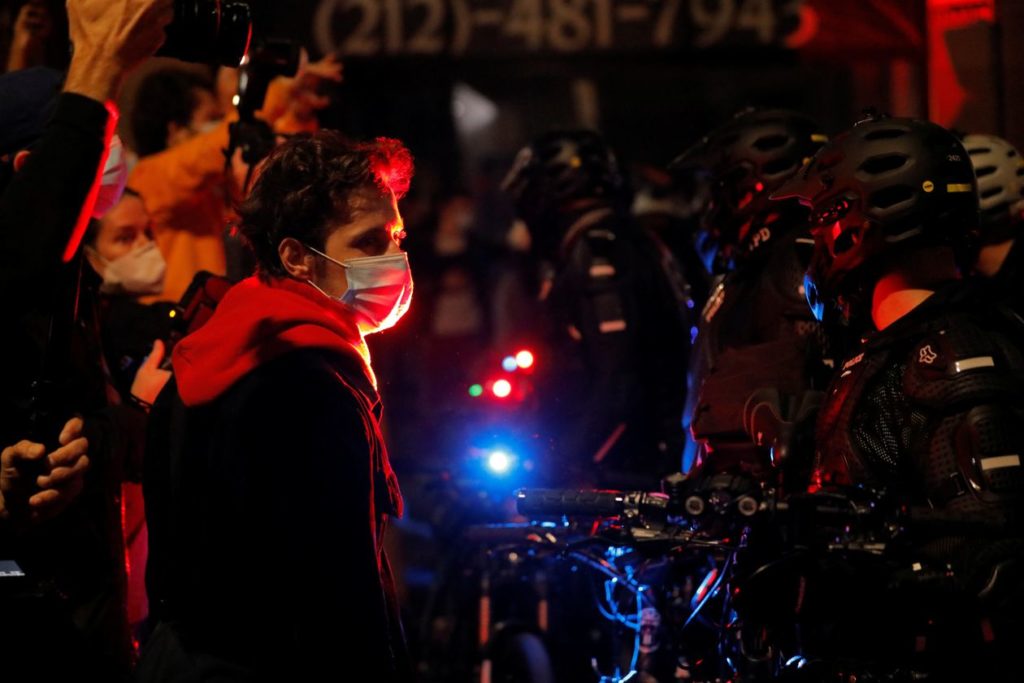 Protests broke out across Manhattan for the second night in a row on Thursday, following mass arrests and attacks by riot cops on Wednesday night. Hundreds of protesters peacefully marching in the West Village this evening were met once again with brutal repression at the hands of NYPD acting on the orders of Mayor Bill de Blasio. As of this writing, over 15 people have been arrested.

While last night’s march was held in response to the elections and to protest Trump and the undemocratic nature of the U.S. electoral system, Thursday night’s demonstration was part of a weekly set of mobilizations called “We Choose Freedom.” For over 21 weeks, protesters have mobilized to demand LGTBQ+ and Black liberation as well as justice for Black lives lost at the hands of the state. Convening at the Stonewall Inn, over 100 demonstrators marched peacefully through the streets, chanting “Black Trans Lives Matter” and “No homophobia, no transphobia.”

But as we’ve seen throughout this summer of uprising, whether protesters are “peaceful” or not makes no difference to the police or the city officials who control them. As the night continued and the march made its way to Union Square, NYPD came out in full force to put a stop to the demonstrations. The Strategic Response Group (SRG) division of the NYPD was deployed on bikes in full riot gear, nearly outnumbering the protesters. As demonstrators decried the massive police presence and chanted “who keeps us safe?,” the cops swarmed the area and descended on the marchers.

Protesters now in Union Square, easily just as many cops as protesters, if not more pic.twitter.com/Ff3ZjzEo2u

One more, plucked off the sidewalk pic.twitter.com/k8DBiiQnjM

Though taking the streets has become commonplace in New York City after months of massive mobilizations, the cops ordered protesters to leave the road or risk arrest for obstructing the roadway. They used this as justification to ram their bikes into protesters and violently shove them onto the sidewalks. According to some reports, NYPD deployed a sound cannon to try to break up the crowds.

Videos of the protests show multiple police — in some cases over ten officers — surrounding individual protesters and shoving them to the ground before hauling them off to police transport vehicles. Among those arrested on Thursday night was one of the organizers of the “We Choose Freedom” protests. Over 70 people have been arrested in New York City since Election Day.

As people take to the streets once again to protest the undemocratic nature of the of racist capitalist state, the police are ramping up violent repression of protesters and using the threat of violence and arrest to deter mobilizations. Meanwhile, Trump supporters mobilizing to demand a Trump victory and disrupting polling stations have met no resistance from the police. No matter the results of the 2020 election, we can be sure that the cops — and the politicians and capitalists they protect — will move to quash dissent in order to return to the murderous status quo that allows the police to kill without challenge. And no matter who takes office, the working class and oppressed must mobilize to protect our rights and each other.