After ten months without a contract, graduate workers at the largest private university in the United States are on strike for better wages, better benefits, and the eviction of the NYPD from their campuses. 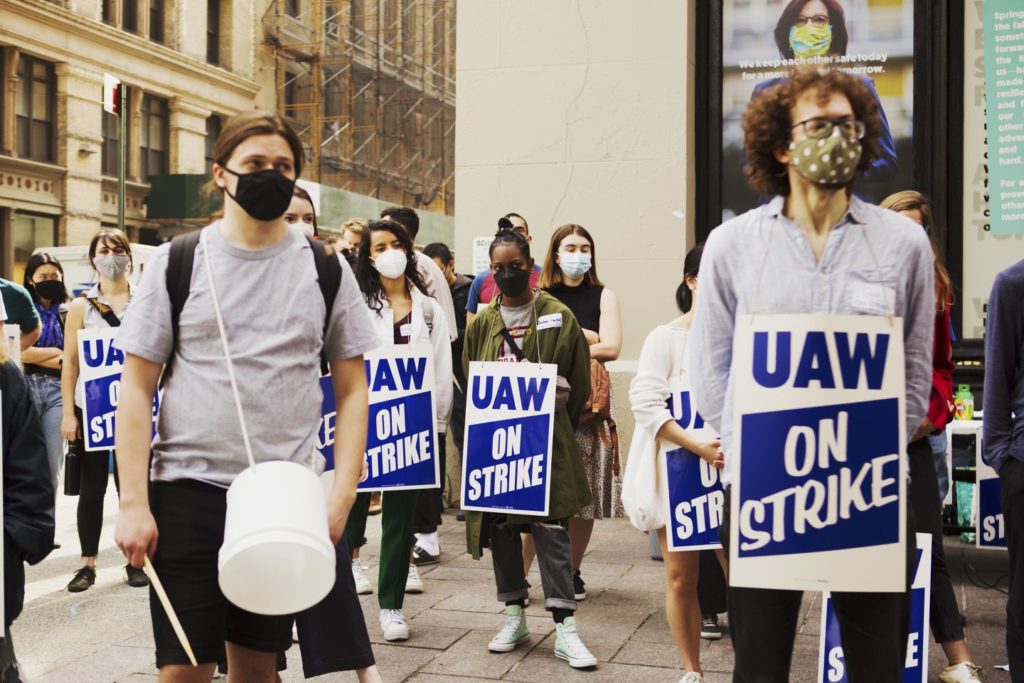 On Monday morning, after ten months of stalled negotiations, more than 2,000 graduate workers at New York University walked out of their classrooms and into the streets. These Graduate employees — who earn just $20 an hour on top of their stipends — perform much of the research and teaching that allows NYU to extract billions in tuition and fees from its undergraduate students. Among their demands for a new contract, workers are asking NYU for an increase in wages commensurate with the increasingly outrageous cost of living in New York City, access to childcare for working parents, and better healthcare. They are also, importantly, demanding an end to the collaboration between NYU (which is one of the largest landowners in the city) and the New York Police department, as well as the removal of all NYPD officers from NYU campuses, showing that labor unions can and must play a real role in the struggle against racist police violence and oppression. While the University has so far remained recalcitrant, an agreement on mediation is already in the works.

The New York University Graduate workers union (GSOC-UAW Local 2110) has a tumultuous history, and this is not the first time that these workers have been on strike. The union, an affiliate of the United Auto Workers (UAW), originally won voluntary recognition in 2000 and settled its first four-year contract in 2001. This recognition was short lived, however. In 2005, the George W. Bush administration’s National Labor Relation Board voted in favor of Brown University in a case that set back graduate worker organizing for years. The NLRB agreed that private universities were not required to bargain with graduate student workers, and so shortly after the expiration of their first contract, NYU refused to recognize the union. This led to the first strike of NYU graduate students in 2005, which lasted six months. That strike failed to win recognition for the union, and it was not until 2013 that the union once again gained formal recognition from the university in anticipation of new rulings under an Obama-appointed NLRB. While these workers were up against one of the richest universities in the world, which had an army of lawyers on their payroll, they managed to win back their union, but only after eight years of struggle.

Now, with formal recognition seemingly guaranteed for the foreseeable future, GSOC-UAW has made more ambitious demands, but has been met with intransigence and insulting counter offers from the university since the beginning of negotiations ten months ago. The union has since compromised on its original demand to increase wages to $46 an hour, and is now asking for an increase to just $32 an hour, a significant concession. In response the university has reiterated its original offer of a mere 22 percent raise over the next six years, much of which would be lost due to inflation, with just a $1 per hour increase in the first year of the contract. On Monday, the union, under pressure from the NYU administration, agreed to allow mediation under three conditions. First, that the picket will continue, second that the mediator be a federal mediator rather than a private one, and lastly, that the bargaining sessions remain open. So far the university has agreed to the first and second demands but not the use of a public mediator, a sign that the university sees private mediation as an advantage.

While mediation may help achieve a new contract sooner, the greatest power of these workers remains their ability to withhold their labor and to build solidarity among other sectors of the broader working class; so far they have proven capable of doing both. Since Monday, the striking graduate workers at NYU have received significant support and solidarity from undergraduate and faculty groups. The American Association of University Professors chapter at NYU, for instance, issued a statement condemning NYU’s history of union busting, and urged faculty to resist calls to substitute their own labor for that of their teaching assistants. Meanwhile NYU undergrads, as well graduate workers across the country, including  CUNY and Columbia University — where fellow UAW workers recently held their own strike — have expressed solidarity, and in some cases joined and spoken out at the picket lines in support of the union.

On Friday, at the end of the first week of picketing, graduate workers enthusiastically received a call from Democratic Party Senator Bernie Sanders expressing his support for their struggle. However, the senator spoke for just a few minutes about his support for the strike before handing it over to one of his aides, who then spent the next ten minutes promoting Sanders’ “College for All Act,” asking the striking GSOC workers to write to their senator, Chuck Schumer and urge him to endorse the bill. While working people should support all efforts to ensure that a quality college education is free and accessible to all, following the lead of Democratic politicians and lobbying Wall Street darlings like Schumer is not the way to do it. Instead, to win such demands requires building militant rank and file-led unions that are independent of the state and capable of linking their struggles with the border struggles of the working class. For example, by linking their struggle with those of Columbia graduate workers, CUNY adjuncts, university staff, and undergraduates across the city, NYU workers could accomplish much more than what Sanders is offering them. They could win major demands to pay workers on these campuses a fair wage, end the exploitative adjuncts system, remove police from these campuses, and make college free and open for all.