Oaxaca: Thousands of troops sent to impose “order and peace” before elections

Thousands of police and army troops arrived last night and early this morning in Oaxaca. Their goal is to attempt to stop social protests and guarantee the elections happening this Sunday. 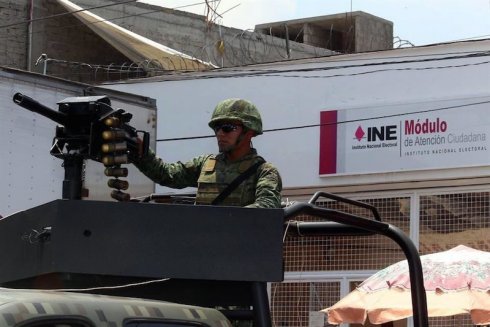 Faced with the an election day on Sunday, the government has begun a military incursion into Oaxaca with more than 20 thousand troops, including the national guard, federal police, army, marines, trucks and anti riot tanks, and several military and police planes have landed in the Benito Juarez airport of Oaxaca.

This incredible movement of troops is part of the Federal Government’s overall objective of preventing any social protests from taking place on the day of the elections. Yesterday, the National Electoral Institute (INE) announced that it would be taking “special measures” to guarantee the electoral process.

The Secretary of State stated that the troops were sent out so that “every Mexican can make it to the voting booth in peace”.

The “peace” that the federal government is talking about is “graveyard peace.” They want to silence the open dissent over the elections during the ongoing political crisis created by the Ayotzinapa students, who are still missing to this day.

The teachers’ movement of Oaxaca, one of the most active sectors in the protests against the elections, has declared a “red alert”, and has called for the occupation around the city to be lifted and mobilized towards the center of the city, in the Zocalo, of Oaxaca.

Section 22 of the teachers Union has lifted the occupation it held in the PEMEX distribution and warehouse plants, which caused a gas outage in multiple areas of the city, and it has also liberated the INE (National Election Offices) offices in district 7 and 8.

Many social organizations, such as the “Coordinadora 1 de Dic”, the MTS (Movimiento de trabajadores Socialistas), and human rights organizations are demanding that the Federal Government stop the military intimidation and stop any attempt to repress the people of Oaxaca.