Obama delivered his eighth and last State of the Union address on Tuesday night, full of demagogy and praise of “American values” and his own administration’s achievements. 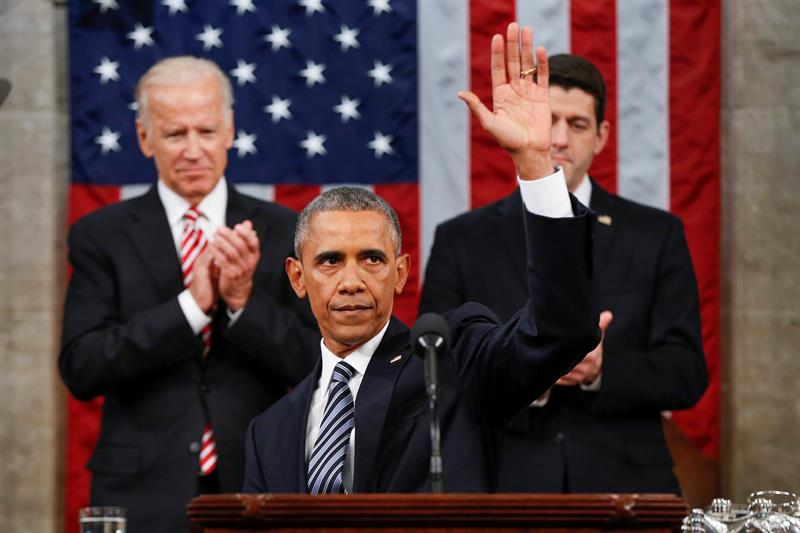 Showing off his conspicuous rhetorical skills, Barack Obama delivered a triumphant speech. He showed himself exultant and audacious, and spared no blows to Republicans. As is custom, he combined a strong defense of individualistic “American values” and capitalist order with profuse demagogy towards black people and immigrants. Among other memorable phrases that sounded like music to the ears of his progressive base, he said, “Food stamp recipients did not cause the financial crisis. Wall Street recklessness did.”

The bulk of the speech emphasized the political measures and accomplishments achieved while at the head of the oval office. Among them were economic recovery and job creation, strongly fostered by the government’s low interest loans known as “Quantitative Easing,” and the generous bailout to big banks. He also defended the Affordable Care Act and the program known as No Child Left Behind (NCLB), responsible for the closure of scores of public schools and/or their transformation into charter schools. The NCLB was replaced by the Every Student Succeeds Act in 2015, which left standardized testing untouched and thus served only as a continuation of the same policy.

In the first few minutes, he pointed out the coming challenges of the government: fix a broken immigration system, protect kids from gun violence, equal pay for equal work, paid leave and raising the minimum wage. The need for all these demands is strongly felt by the working class. Millions of Latino and other immigrant workers living and working in the US suffer the treachery of a cynical immigration system. In addition, the US is the only industrialized country without guaranteed paid leave in case of illness or pregnancy. However, he promised to solve precisely these two issues in the SOTU 2015 and nothing changed since.

In the same vain, he pledged to raise the federal minimum wage a year ago, but no move in this direction was taken. Rather, local councils and legislatures were forced to concede to popular pressure in several cities due to federal procrastination.

The stress on gun control is a clear sign of support for Hillary Clinton, who finds herself in a tooth and nail fight in the primaries against Bernie Sanders. The senator from Vermont has shown himself more hesitant to push for gun control.

After the introduction, the SOTU was organized around four topics: the economy and employment, climate change (and technology), the threats to national security and the role of the U.S. as sergeant of the world, and, finally, partisan politics.

Regarding the economy, Obama emphasized the recovery of production and monetary indicators, as well as the significant job creation during the years following the 2007 crisis. Of course, what he didn’t say is that the great majority of these new jobs are low-wage, precarious jobs .

He also highlighted the reinvigoration of the auto industry in 2015. The counterpart of this recovery, again, is the advance of right-to-work laws across the southern states (and, lately, throughout the country) where auto plants have been relocating in the past few years.

When talking about climate change, Obama didn’t miss the opportunity to mock the hardcore “deniers” of the GOP who, until recently, were very outspoken on the subject. “Look, if anybody still wants to dispute the science around climate change, (…) you’ll be debating our military, most of America’s business leaders, (…) and 200 nations around the world who agree it’s a problem and intend to solve it.”

He then sent a wink to the green energy industry: “But even if the planet wasn’t at stake, (…) why would we want to pass up the chance for American businesses to produce and sell the energy of the future?” Tom Steyer, a major energy tech producer, was no doubt sitting in his armchair, toasting to upcoming profits. Steyer was ranked the top single donor for the Dems in 2014 , having donated over $75 million.

Obama also boasted about how the US escaped foreign oil dependency over the last few years. Incredible and unexpected accomplishment! What he hid, however, is that this feat was possible thanks to the pervasive expansion of hydro-fracking across US territory, the most destructive and polluting method of fossil fuel extraction.

When it came time to talk about national security threats, Obama adopted a surprisingly pragmatic tone. He criticized GOP’s fear-mongering tactics–waving the specter of ISIS and the “threat” posed by Syrian refugees. Without naming him directly, Obama blasted Donald Trump for his anti-immigrant, reactionary rhetoric and said that the idea that “our enemies are getting stronger” is “hot air”: “We spend more on our military than the next eight nations combined (…) [T]he international system we built after World War II is now struggling to keep pace with this new reality. It’s up to us to help remake that system.”

He then moved on to Congress, urging their approval of the use of military force against ISIS. He attempted to temper his imperialist, warmongering speech by trying to detach himself from frustrated past military experiences: “We also can’t try to take over and rebuild every country that falls into crisis. (…) It’s the lesson of Vietnam, of Iraq.”

Before closing the speech, he called on the GOP representatives to work together on bipartisan bills and different policies. Even if this could be a formal call, with no real meaning, the gesture seemed to point out the need to re-legitimize the discredited institutions of American capitalism, beginning with the US Congress.

Lastly, he demagogically criticized the attacks on mosques and defended both “protester determined to prove that justice matters” and “cop walking the beat”: no word on the cops who kill protesters, blacks and Latinos, or kids with toy guns.