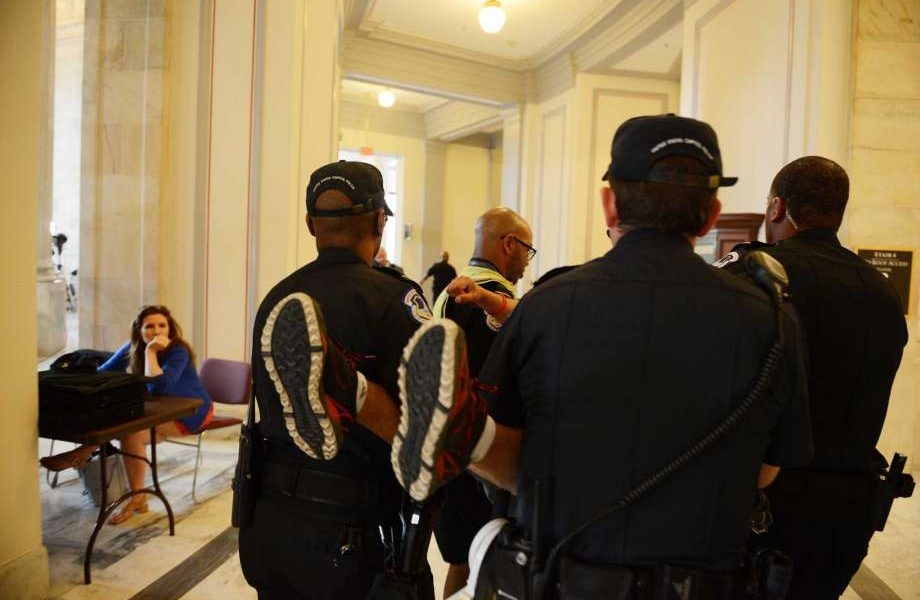 As Majority Leader Mitch McConnell, R-Ky., was releasing the Senate’s version of the health-care bill, people with disabilities arrested outside his office.

Left Voice publishes this article in solidarity with the activists who were arrested by the Columbus police.

At roughly 3:10pm on Friday, July 7, 15 activists from the disability group ADAPT were arrested by Columbus police during an occupation of Senator Portman’s (R) office.

The occupation was a continuation of a sit-in the previous day, organized by Junto Unsilenced’s Kelly Weber, John Shade, and Bilal El-Yousseph and supported by Ultraviolet and Planned Parenthood. Their goals were twofold– to get Senator Portman to vote “no” on any version of the current Senate healthcare bill, the BCRA, and to force Portman to hold a town hall to address his constituents on the topic of healthcare, which he has thus far avoided. There were sit-ins organized at every single one of Portman’s Ohio offices, though only Columbus and Cincinnati (the latter of which was led by Socialist Alternative and Democratic Socialists of America) were able to occupy the offices. 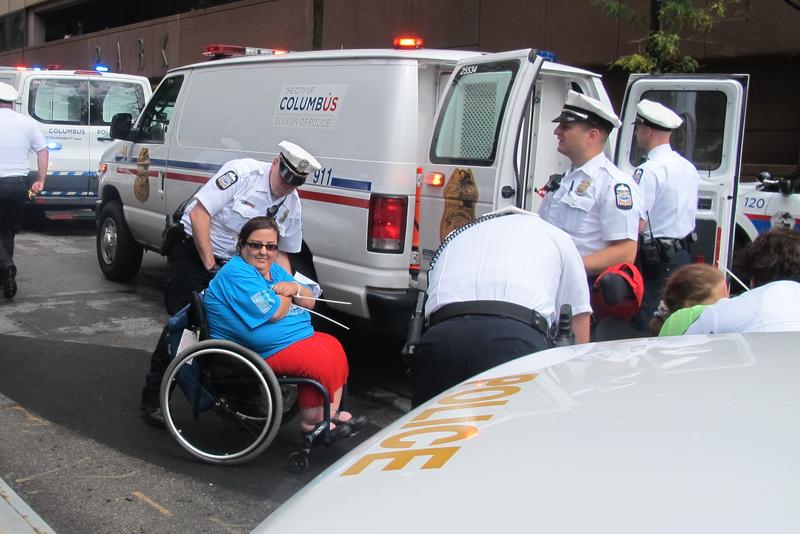 The sit-in turned into an overnight occupation when activists were unable to receive any answers from Portman’s staff.

“[Portman’s Press Secretary] kept saying, ‘Oh, he holds hundreds of meetings all over the state.’ Where are those meetings and where can we find the schedule so that we know when to show up?” said Kim Kelly, an occupier who said she was there for her disabled son, Joseph LaValle. “She said that they don’t publish them because it’s a safety issue for the senator.”

The occupiers were also directed to fill out ‘schedule forms’ to get a meeting with the senator, but Shade said that these had no effect.

“I’ve filled out like three [schedule sheets] online, and probably four or five in person,” Shade said. “I’ve never even received a reply.”

The next day, after the original occupiers were replaced by a new shift, disability activists from ADAPT joined the fight, completely shutting down the lobby, front revolving doors, and several elevators in order to demand no cuts to Medicaid. Most of the occupiers had disabilities themselves and relied on Medicaid in order to remain in their own homes with appropriate care.

The activists were able to hold the lobby for several hours, but just after 3pm, the Columbus Police Department descended in full force.

There were at least 30 police cruisers locking in the entire building, and the Columbus Free Press counted at least 50 police officers for the relatively small group of activists (perhaps 20 inside the lobby and several upstairs). There was so much police activity that onlookers wondered if there had been a terrorist attack.

In one particularly brutal incident, a police officer tipped disability activist Alisa Grishman out of her wheelchair and onto the floor. Then, the cop simply walked away.

As many as 16 activists were arrested for trespassing, but all were released that night because the Columbus jail was not equipped to accommodate the activists’ wheelchairs and healthcare equipment.

The ADAPT activists received nationwide attention for engaging in actions to bring attention to disability rights and fight Trumpcare around the country. Yet, these experienced activists noted that the treatment by Columbus police was particularly bad.

The action in Columbus was by no means an isolated incident – ADAPT along with many other organizations occupied Congressional offices all over the country during the week of Congressional recess. Senator McConnell had originally planned to use the week to gather support for his healthcare bill, but thanks to actions from activists all around the country, that plan backfired. It no longer appears that the bill will pass, as Senator John Hoeven, Republican of North Dakota, just pledged not to support the bill “in its current form.” He marks the 10th GOP defection from supporting the bill. Senator McCain has even gone so far as to say that the bill is “dead.”

There can be no doubt that more and more people are taking action to fight for their rights. In the first months of Trump’s Presidency, discontent expressed itself in the massive Women’s March, as well as the airport protests against the Muslim ban. Today, discontent is being expressed in town halls across the country. In Columbus, as well as in other cities, groups such as ADAPT have decided to escalate tactics and engage in sit-ins and occupations.

In Columbus, Junto Remains Unsilenced and Socialist Alternative will be hosting a town hall at 6:30pm on July 11th on the Ohio Statehouse grounds, whether Portman shows or not. Their actions the past week have proven that Ohio activists are not going to back down from the fight, and certainly are not to be underestimated.

Greyson Van Arsdale is an independent Columbus journalist, filmmaker, and member of Socialist Alternative. He is a transgender man and leftist activist going to university for film and electronic communications.