Of Course Joe Biden Intends to Appoint Republicans to His Cabinet

Last week, progressives were frustrated to learn that Joe Biden is reportedly considering moderate Republicans like John Kasich and Jeff Flake for Cabinet positions. But Biden already agrees with Republicans on key issues such as supporting private healthcare, big business, U.S. imperialism, and the police. 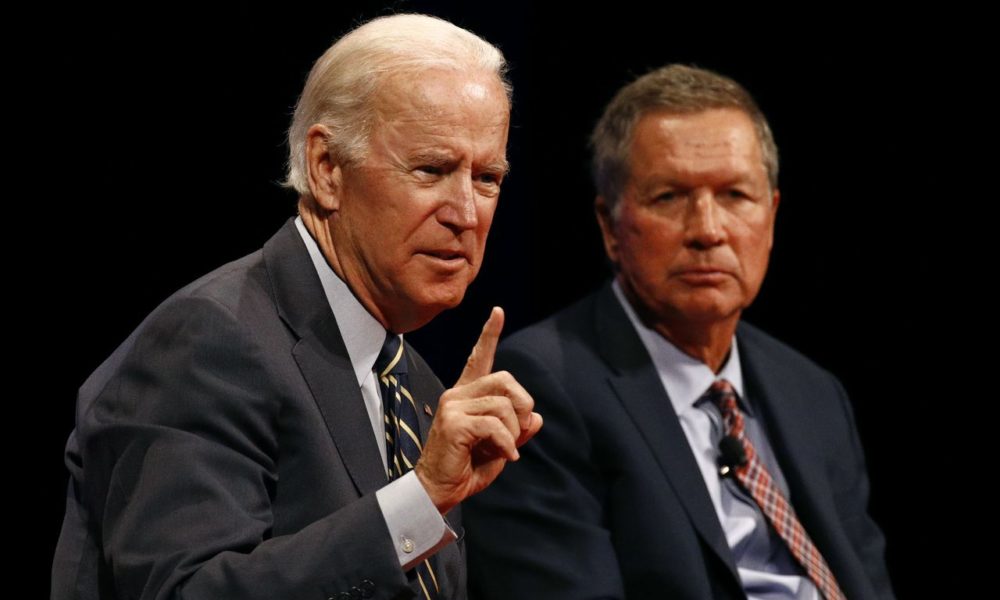 Last week, Politico reported that Joe Biden is considering a variety of Republicans for cabinet positions, should he become president. This is not actually unusual; Clinton, Bush, and Obama also appointed cabinet members from the opposing party as a gesture of bipartisan goodwill. Trump is the only president in recent years who has not. However, readers who are surprised or frustrated by Biden’s considerations should not be reassured by the precedent. The fact that this is common illustrates that the depth of difference between the two parties is largely an illusion. When it comes to policies that could substantially improve the lives of working people, both parties are largely in agreement: capital comes first.

Certainly, Republicans and Democrats have some policy disagreements. But do those disagreements amount to anything meaningful for most working people in the United States and around the world? Not really. While some media outlets reported that Biden and Trump “diverge[d] sharply” on major issues during their last debate, neither supports defunding the police, both would continue detaining and deporting undocumented immigrants, both support U.S. imperialism and the Israeli oppression of Palestinians, both compete over who would be tougher on China, and both support the private healthcare industry that causes millions of Americans to go into debt.

David Segal, the executive director of Demand Progress, said his primary hope is that Biden “involves people in the Cabinet who push back against corporate power and support a massive economic stimulus and the broad provision of health care. Unfortunately, there are no prominent Republicans I know of who are on board with that agenda.” However, you’d be hard pressed to find many Democrats who meaningfully support that agenda either. In fact, at a town hall hosted by ABC News, Biden emphasized that “there are so many things we [Republicans and Democrats] really do agree on.”

The purported tactical advantage of Biden appointing Republicans to Cabinet positions is to gain goodwill and legislative cooperation, such as on a budget or stimulus package, from a wider set of Republicans in the federal government. However, it seems unlikely that this would actually work. As an example, Obama’s first cabinet included Bush’s Secretary of Defense and Chairman of the Federal Reserve. Even with these olive branches to Republicans, though, they still fought him on essentially every major policy proposal. Even if Biden is able to generate enough bipartisan goodwill to quickly pass some legislation, such as a new stimulus package, we must have no illusions that such legislation will have anything more than marginal benefits for the working class.

According to Politico, “Biden allies say that for a nominee who will be looking to appoint the most diverse Cabinet in history, ideological diversity should be a part of those considerations.” But what do they mean by “ideological diversity”? Bernie Sanders is reportedly interested in becoming Labor Secretary, but it’s unknown if the Biden team is even considering him. Does this “ideological diversity” include perspectives from the left, or does it only mean moderates and right-wingers? Some studies have found that “moderates,” “centrists,” and “conservatives” actually have most of the same values and policy positions. So what “diversity” are they really talking about here? In terms of party platform, Democrats and Republicans were close together, and both right-of-center compared to European and Canadian political parties between 2000 and 2012. The same analysis suggests that Democrats diverged from the Republicans and moved left-of-center in 2016, yet these changes are mostly rhetorical, except for on certain issues such as same-sex marriage. Any “diversity” of Democrats and Republicans is only “diverse” within a very narrow band of the political spectrum.

One of the Republicans reportedly up for consideration is John Kasich, the former governor of Ohio. But even as one of the more “moderate” and anti-Trump Republicans, who expanded Medicaid as governor, Kasich passed an anti-union law that voters later overturned and “signed nearly two dozen measures that restricted abortion.” Two others are Meg Whitman, a tech CEO, and former Arizona senator Jeff Flake, another anti-abortion Republican who has also voted against protections for trans people, against internet privacy rights, and against the Affordable Care Act. This is, so to speak, the future that liberals want — a future of civility and bipartisanship in which our rights get withered away — just more slowly and respectably than under a fully Republican regime.

Even aside from Biden’s policy record and positions, there is additional evidence that he has no plans to pivot left under progressive pressure if/when he is elected to the White House. On top of his proud opposition to Medicare For All despite widespread support, he is rumored to not even plan on fighting for a public option once in office. He supports fracking. He is against family separations but for deportations. He supports continued military and economic intervention abroad. Despite recent changes in rhetoric, he has an extremely problematic record on racial justice. He is an accused sexual assaulter. Jacobin’s timeline shows that for the first part of his career, Biden steadily moved further right, not left, on many issues (such as bussing). Although he has changed his tune in recent years (for example, saying he regrets aspects of the 1994 Crime Bill), there’s little to suggest that these claims will translate to meaningful policy changes. He and his team could have chosen to pursue a strategy of appealing to Bernie Sanders supporters and other leftwing voters after he won the primaries, but instead, they chose to court moderate Republicans, assuming the Left’s hatred of Trump would keep their votes in the bag.

A strategy of pushing Biden left to stop the right is plainly going to fail. But even if Biden did choose to court the progressive wing of the Democratic party instead, he would still be subject to all of the same pressures from capitalist interests as anyone else. Ultimately it doesn’t really matter if Biden puts Republicans in his Cabinet or not. This is because the Democrats, despite including many working class people, are fundamentally a bourgeois party, just like the Republicans. They will always be politically compromised, and will support bourgeois interests at every turn. The answer is not to eschew elections entirely, but to form a working class party of our own.