After decades of cuts to education, teachers finally had the courage to demand better conditions. They walked out of the schools and confronted the politicians in Oklahoma City, citing tattered and outdated school books, black mold on the walls, and crowded classrooms. Despite the offer of a $6,100 salary increase before the walkout even began, the teachers decided that they had to walk out for the good of the students and Oklahoma’s education system.

So, they did. Every workday, the teachers, students and families descended on the Capitol in droves — between 20,000 and 30,000 on most days so far. The community support was overwhelming, with food being delivered from local businesses, teachers receiving free meals at local restaurants, and honks of approval from most of the cars that drove by the underpass of the highway near the rally. With signs that made clear that they were there for the good of the students, teachers indicated that they would be at the Capitol every day until the education system receives proper funding.

You may be interested in An Open Letter to Oklahoma Teachers

The OEA (Oklahoma Education Association) is the largest teachers union in the state. Oklahoma is a right-to-work state, and the majority of teachers are not unionized. Since the beginning of the walkout, the leadership of the OEA has been challenged by rank-and-file teachers. These teachers communicate and organize themselves using a Facebook group with 80,000 members; this allows them to discuss, debate, post articles and think of steps forward. When the OEA tried to postpone the walkout until the end of April, rank and file members threatened a dues strike if the union did not call the action for April 2.

Just yesterday, a poll was posted on the Facebook group asking how many teachers wanted to continue the walkout even if the OEA declared it was over. Less than 400 voted to follow the OEA’s lead while almost 8,000 said the walkout would continue.

Just a few hours ago, OEA President Alicia Priest organized a press conference in which she lauded the teachers’ struggle as a partial success because of the wage increase. “You have achieved a historic victory for our students,” she said. “But,” she said, “we need to face reality,” and that despite the nine-day strike, the legislature was not going to accept any other teachers demands. She went on to say that, in an online vote conducted by the OEA, “70 percent of respondents are unsure if continuing the walkout phase of our campaign will likely lead to further achievement of the ‘together we are stronger’ goals.” 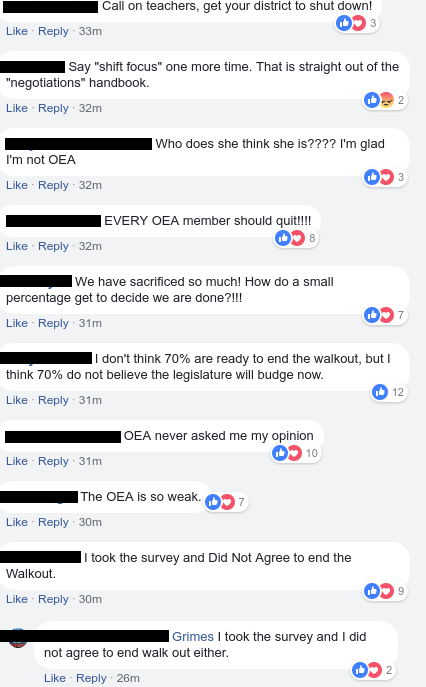 She claims that, due to the success of the walkout, it is time for the teachers to return to school. However, an OEA member told Left Voice that the results of the online vote conducted by the union have not yet been published and that the OEA refused to call an assembly for teachers to discuss and debate next steps. Another teacher said she took part in a vote — but only on whether school should be back in session on Friday as opposed to Monday. Since most teachers are not represented by the OEA, even if their report of the results is accurate, it can hardly be considered a representation of the views of all Oklahoma teachers.

After the OEA announcement, Alberto Morejon — the organizer of the teachers’ facebook group — asked teachers to continue the conversation and decide for themselves if the walkout was over, which is an implicit challenge to the authority of the OEA. Teachers and parents have responded overwhelmingly with anger at the OEA and are communicating the will to continue the walkout. 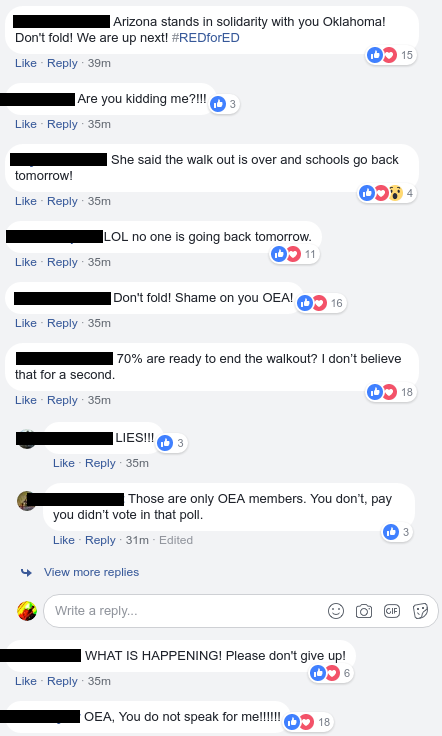 The road ahead will be difficult if teachers refuse to return to work. While the walkout was originally supported by superintendents who agreed to cancel classes, teachers in many districts will now be considered in breach of contract if they refuse to go back to their schools.

Since many of the districts already announced school closures through tomorrow due to the walkout, there are likely to be continued mobilizations at the capitol. The real test will occur on Monday when it becomes clear whether these teachers will defy both their districts and the OEA.

Student Voices for Oklahoma Teachers: Oklahoma youth have played an important part in the walkout, attending the rallies and organizing speakouts at the Capitol.