On the 45th Anniversary of Argentina’s Last Military Dictatorship

45 years ago, a military coup backed by the CIA installed a military dictatorship in Argentina. Today, we remember the tens of thousands of workers, students, and activists who disappeared. 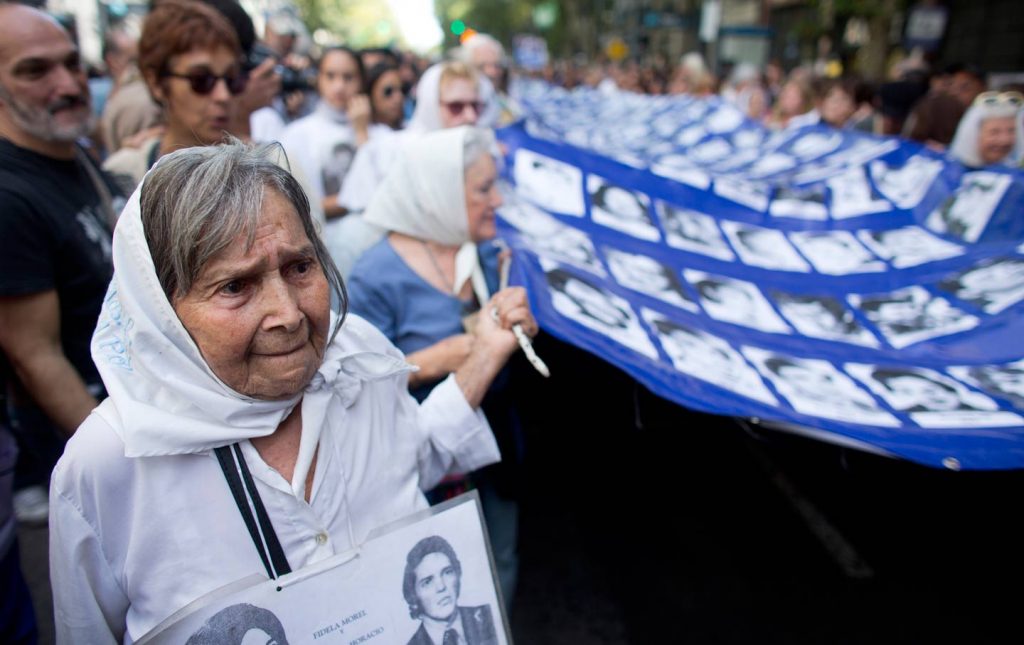 Today marks the 45th anniversary of the military coup that brought in the most infamous military dictatorship in Argentina’s history, and one of the most brutal in the history of Latin America. The 1976 deposition of President Isabel Perón amidst widespread social unrest and class war ushered in a period of “national restoration,” as coined by the military junta, with the backing of the CIA. It was responsible for the disappearance of an estimated 30,000 left-wing students, union leaders, workers, guerrilla fighters, and other “subversives” deemed a threat to Argentine “society and culture.” This period would last until 1983, when the military junta crumbled amidst economic catastrophe and the debacle of the 1982 Malvinas (Falkland) Islands War. Human rights activism and protests undermined the legitimacy of the dictatorship.

In the aftermath of the dictatorship, Left and social justice organizations forced Argentina to take up a campaign of “Memory, Justice, and Truth.” Every year, tens of thousands mobilize on this day, March 24. However, the current Peronist government of Alberto Fernández, as well as his more progressive vice president Cristina Kirchner, have refused to call for marches and other popular displays of remembrance this year, using the excuse of a second wave of COVID-19 cases on the horizon. Instead, they have proposed planting 30,000 trees to commemorate those who “disappeared” under the dictatorship.

However, the administration hasn’t shown concern about the coronavirus when workers are forced to work in unsafe or unsanitary conditions. Rather than being about COVID, their refusal to call for remembrance follows a pattern of trying to appeal to the country’s Right at any cost to “mend the rift” between the divided Left and the oppositional Right. The country’s Party of Socialist Workers (PTS) has been openly critical of this decision, supporting marches throughout the country and demanding that the government call for the same.

Additionally, the disappearance of a witness in the Facundo Castro case, where the police disappeared a 22 year old for breaking quarantine restrictions; repression of environmental groups as well as to the families occupying Guernica; and police blocking Gastón Remy, an elected PTS provincial congressman from taking his seat, among others, exemplify the violent legacies of state terrorism and repression by security forces against the working class and dissidents.

This is nothing new. Peronism has always sacrificed workers’ progress for political power and stability. We can see this in the history of Peronism and the military junta of 1976-1983.

The government of Juan Domingo Perón from 1946-1955 manipulated the then politically disenfranchised workers’ movement by incorporating it into government-controlled unions that provided him with support as the supposed voice of the worker. Free association of unions was banned in favor of bureaucratic corporatization as Peronism attempted to find a “third path” that balanced workers and capital through simmering down class tensions.

After Perón was replaced by a military government and sent into exile, the country experienced mass social unrest fueled by class war between the workers and the ruling oligarchy, while the government switched between short periods of military and civilian rule. The ideological differences in Peronism were evidenced by a fracture of left-wing and right-wing supporter groups that developed in the years following his exile.

Popular discontent would eventually culminate in worker strikes, the uprising in the city of Córdoba in 1969 led by the working class, and the emergence of guerrilla groups such as the Marxist-Leninist People’s Revolutionary Army (ERP) and the left-wing Peronist Montoneros during the 1970s.

These antagonisms led by the working class led to Perón being permitted to return from exile, while being prohibited from being on the ballot of the 1973 elections. After the Peronist candidate, Héctor Cámpora, won the election, he quickly resigned in order for Perón to come to power. However, his health was so poor that his third wife, Isabel, would take over as president. Regardless, neither the popular discontent nor the guerrilla groups were pacified by the change of government.

The new Peronist government announced economic reforms in 1975 that sparked small strikes throughout the country. Then, two general strikes by the largest union, the General Confederation of Work (CGT), represented the first time a union had struck against a Peronist government after the workers rebelled against their bureaucratic leaders. There emerged systems of worker committees and other democratic structures within factories that sought to take control of their workplaces. Upon their spread to factories all over the country, the bourgeoisie began to talk of an “industrial guerrilla.”

Moreover, while often “forgotten” by some sectors of the Peronist Left, this same government was actually the one that began the use of death squads that disappeared dissidents and fought the guerrilla groups. In fact, by the time the military junta came to power in 1976, the guerrilla threat had essentially been eliminated.

That, however, did not stop the junta from using the supposed guerrilla war as an excuse to continue to disappear, torture, assassinate, and sexually violate tens of thousands of “subversives” in a thinly veiled attempt at waging class war against those deemed a threat to the traditional oligarchy’s social, economic, and political domination of the country. Of course, this was done with knowledge and backing of the CIA through Operation Condor, which linked military dictatorships in the region and supported these tactics of mass repression committed against the working class.

In spite of the brutal fascistic repression enacted during the military dictatorship, the working class continued to play an antagonistic role of resistance, striking outside of their traditional bureaucratic structures and mobilizing to call for the appearance of the disappeared.

This history provides three important lessons. First, Peronism is not the great defender of the worker that it claims to be: it has routinely used workers to maintain its own power while refusing to truly free them by changing their exploitative relationship with the means of production. In fact, it has directly fought against popular uprisings using heinous tactics later continued by a fascistuc regime.

Second, popular struggle and class conflict have consistently defined Argentina’s political history, despite Peronism’s attempts to pacify conflict by appealing to right-wing sectors both within and outside of its own ranks. Workers have therefore often had to challenge their Peronist direction and fight for their own progress.

Thirdly, the history provides a lesson against U.S. imperialism. The CIA was one of the major forces behind the dictatorship, and the United States continues to support coups all over the world. People like Elon Musk supported the coup in Bolivia, and President Joe Biden is supporting Juan Guaido in Venezuela. The U.S. regime also supports the current government in Haiti despite the massive revolts. And further, the United States is hoarding coronavirus vaccines, continuing their financial imperialism through the IMF, and exploiting natural resources. The struggle against U.S. imperialism is not only historical — it’s linked to today’s imperialism.

The current situation is merely a continuation of the historical ineptitudes of Peronism. Given the role of the U.S. government in the atrocities of the military dictatorship, Left Voice supports the PTS’s call for marches in defense and remembrance of the workers, students, union leaders, and all others who suffered the brutality of 1976-1983.