On the Legacy of a Revolutionary

The following speech was given by Chipi Castillo, a national leader of the PTS in Argentina after the death of Laura and Ezequiel, two comrades who died of CO2 poisoning. Fede, another comrade who was in the same apartment is in critical condition in the hospital. This speech was given at a special event to honor the lives of the fallen comrades with homages by co-workers, comrades and family members. 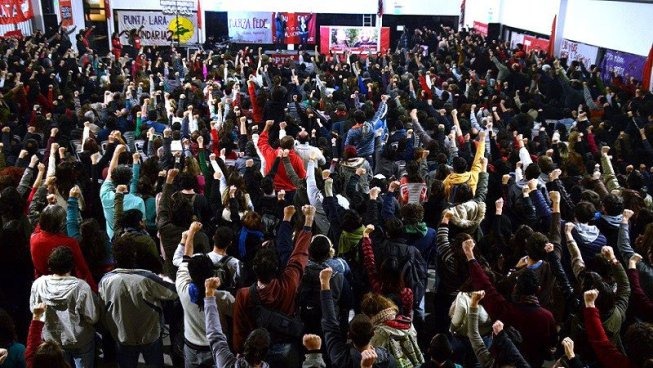 For more about the death of these comrades, read “In Honor of Our Fallen Comrades.

For more about the PTS in Argentina, read The Rise of the Revolutionary Left in Argentina.

First of all, Laurita and Ezequiel, PRESENTE!
Hasta el socialismo siempre! (Until socialism, always).
And much strength to Fede.

Believers in various religions have different ideas about what happens after we die. The polytheists of antiquity addressed the separation of body and soul — Plato said that the body was the prison of the soul. Some people even celebrated death, believing their loved ones had left the earth to go to a better world. In the Judeo-Christian tradition and later Christianity, the destination of the soul is determined according to deserved rewards and punishments for what one has done in life. And then there is the doctrine of Predestination in which one’s individual actions do not determine where one ends up in the afterlife, but a supposed God decides where the soul will go after death. These religious beliefs seek to counteract the fear of death with the idea that the time we spend here on earth is transitory — that we can look forward to another, better future.

Many at this gathering know Marx’s definition of religion as the opiate of the masses. That definition is sometimes oversimplified, as Marx’s well-known assertion about religion has a dual meaning. First off, he asserted that the belief in a better future acted as an anesthetic to the struggles of the present — this was especially true in the Middle Ages when the Christian religion was omnipresent and the struggles of the most exploited were deeply affected by religious beliefs. Religion as an ideology of the state played the role of suppressing struggle. Don’t fight oppression now. Be humble. Do your duty. Fulfill the divine mandate because in paradise, you will be free.

For Marx, however, religion also served the function of alleviating the suffering of a very painful life. The peasants could withstand a grueling existence because they had their religious beliefs — and hopes for a better future — to sustain them. This is why Marx referred to it as a form of opium. Religion anesthetized the suffering of the present.

We say our goodbyes to our comrades as atheists and materialists. We do not believe there is a life other than this one. We do not believe in transcendence beyond our material existence. This makes our experience of their loss all the more difficult and complicated. In the absence of a collective project and a fight to transcend this existence, life in some ways loses its meaning. The transcendence we strive for is not based on a mystical belief in something that is beyond the material world we are in.

This gathering in some ways demonstrates that Laurita and Ezequiel have not truly died. How can we say that? Because in the presence of their family members, of their comrades in the PTS, of their co-workers and their classmates, it is clear that they transcend themselves and that they have achieved that transcendence based on their convictions. Because they dedicated their lives to something, something they were truly convinced of — something they arrived at through reason. They were able to do this with the understanding that, in this society, it is not inevitable that there are some who lose and some who win. Some who give orders and some who obey orders. Some who appropriate the riches and some who have nothing more than daily miseries.

Ezequiel and Laura, like so many others, took up the cause and the struggle to end capitalist exploitation — to end this system. They did this not as a profession of religious faith, not because they saw the end of this system as a predetermined or inevitable destiny, but because they saw that it is a historic possibility that is in no way automatic. This capitalist system that produces violent deaths due to war, hunger, and undignified conditions will not destroy itself on its own. It needs a gravedigger. It needs a working class that will stand up and a collective political desire that will allow the working class to win. This is the cause that Ezekiel and Laurita took up. It is the cause that Fede is fighting for now.

Comrades, this gathering is an assertion of our militancy. We all feel so much pain due to the loss of our comrades. We feel so much anger because it is not the kind of death that, as militants, we know that we might suffer like death due to repression or imprisonment. Laura and Ezequiel’s death at such a young age is a senseless death. A tragedy.

In this sense, our militancy is always intense. It is intense because we know that no moment can be repeated. Because we find joy in life, and we live it to the fullest, knowing that afterwards, our existence ends. We strive to leave something behind for all of those who fight for a better existence. Our work is the product of generation of exploited people who have fought to free themselves from the chains of domination. To build an egalitarian society.

At this point, we cannot take on the task of overcoming death. Every generation needs to solve the problems it has in front of them. We must solve the problems of inequality, exploitation, and oppression. We need to end wars, build a socialist society, and reduce work hours so that we can end alienation and so that everyone can have free time; we need to make art and culture accessible to the whole population and not just a few the way it is under capitalism. We must end capitalism in order to open the doors to true civilization and end the prehistory of humanity.

This is the goal that Laurita and Ezequiel died for. Those are the flags we fly. Those are the convictions we have. We are angry, we are sad, and personally — and I think I speak for everyone here — we are very proud of how Ezequiel and Laura are held in such high esteem by their co-workers as they have shown by their presence here and by how highly they speak of our comrades. I knew the comrades through our shared militancy at the university. With Fede I have more of a relationship, a personal friendship, and we have engaged in political exchange for years. I know he will fight for his life with all the strength he has.

We have so much pride in who these comrades were, and there are hundreds of PTS militants who are like them, who have the respect and recognition of their co-workers, fighting in the movement for each demand and organizing anti-bureaucratic unions and in the student movement. They are fighting for a student movement that is connected to the working class and that does not accept the model of graduating as professionals to be at the service of capitalist exploitation. A student movement that uses all its strength to fight for the liberation of the most exploited. We are so proud of our comrades, but it comes along with anger because they left us before their time. Because they had so much to give. And I know they gave it until their last moment.

This speech can be viewed in Spanish here: