On This Day: The Little Falls Textile Strike of 1912

On January 3, 1913, workers across New York won their demands after eighty-seven days on strike. 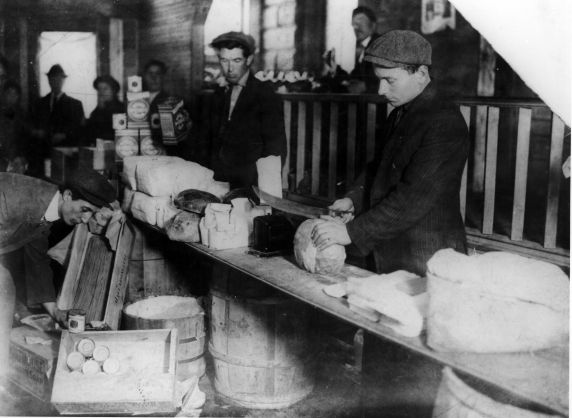 On October 9, 1912, the workers of the Phoenix Knitting Mill in the small upstate New York city of Little Falls walked off the job in response to pay cuts. They were joined a week later by the 76 employees at the Gilbert Knitting Mill, also in the Mohawk Valley. The strikes were motivated by a pay cut that came in response to the legislation known as the Jackson Bill, and would last 87 days until January 3, 1913, when the Phoenix and Gilbert workers, along with hundreds of other textile mill workers, successfully organized as part of the International Workers of the World union (IWW).

The New York State legislature had passed the Jackson Bill at the start of 1912, reducing the work week from 60 to 54 hours a week for women and children. The bill was, at least in part, a response to the Triangle Shirtwaist Factory fire in New York City the previous year, which had claimed the lives of 145 workers, mostly women. Industry had been rapidly expanding since the start of the 20th century, especially in the lead-up to World War I, and more and more poor people — especially new immigrants to the United States — were joining the factory workforce.

Workers were desperate for better wages and the capitalists were hungry for profits. The relatively new labor unions — the American Federation of Labor (AFL) dated from 1880 and the IWW (the “Wobblies”) from 1905 — were fighting for workers’ rights. The IWW practiced a form of “revolutionary industrial unionism” that drew from the radical traditions of socialism, syndicalism, and anarchism.

IWW workers were beginning to strike across the country in 1912, from the Bread and Roses Strike of 25,000 mill workers in Lawrence, Massachusetts to the “1,000 mile picket line” of striking railroad workers and the dock workers strike in San Pedro, California. Slowly, these striking workers were winning protections thanks to the pressure their work stoppages put on their  bosses and politicians who served these capitalists. Throughout  New York State, working hours were reduced, but the owners of factories such as Phoenix and Gilbert responded by cutting workers’ pay, replacing one strain on working-class families with another.

By October 1912, the women of the mills in Little Falls had had enough and walked off the job. The town soon found itself at the center of labor struggles across the country. Divisions arose between socioeconomic classes. City officials, naturally, sided with the factory owners. The police refused to issue permits for public speaking and broke up peaceful labor events. This persecution of and attempts at censorship of striking workers drew activists to their side, garnering publicity about the strike and expanding the movement. In late October, the workers voted to join the IWW.

Tensions escalated in November when the Little Falls Council voted to authorize a contingent of special police to “manage” the strike. Later that month, the AFL — which opposed the radical views of the IWW — created United Textile Workers local #206 to compete with the Wobblies for members and press attention. At the end of November, the AFL announced it had reached a settlement between striking workers and the mill owners, but the workers themselves refused it, demanding greater concessions.

By late December, the New York State Department of Labor intervened, sending representatives to Little Falls to hold public hearings. The workers were steadfast, though, and a settlement seemed out of reach. Nevertheless, three days of hearings and work by a mediation board yielded an end to the strike on January 3, 1913. The settlement (with many elements of the earlier AFL “settlement” still remaining) was based on three conditions: no discrimination against workers who had been on strike; reinstatement by the companies of all workers as soon as possible; and 60 hours pay for 54 hours work for all workers, regardless of gender. The striking workers had won.

In the 21st century, factory work has largely been exported overseas by U.S. and multinational companies, where they can buy labor more cheaply than in this country. But recent strikes in other industries — such as the successful 2019 teachers’ strikes in Los Angeles and Chicago — demonstrate that the power of picket lines and work stoppages remains strong. Now more than ever, as the Covid-19 pandemic and resultant shutdowns rage on, we need a general strike to demand wages and protections for all workers.