On Transgender Day of Visibility, Fight for Trans Youth

Trans kids are under attack across the United States. This Transgender Day of Visibility, let’s vow to fight for them. 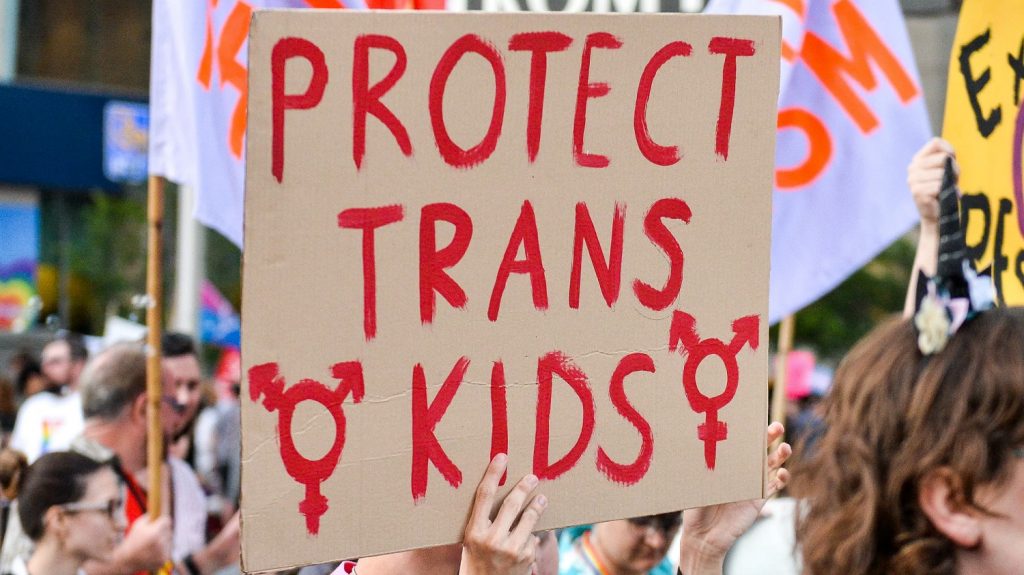 Today on Transgender Day of Visibility, Republicans are doing their utmost to erase trans children — from the classroom, from sports, and from society as a whole.

A day meant to celebrate trans people and raise awareness of their plight comes amid a historic onslaught of attacks on trans youth. Just yesterday, Arizona governor Doug Ducey approved a ban on gender-affirming healthcare for minors and a ban on trans girls competing on girls’ sports teams. Two days earlier, Florida governor Ron DeSantis signed into law the so-called “Don’t Say Gay” bill, which forbids educators from discussing gender and sexuality, and allows parents to sue schools that they perceive to be violating the law.

In fact, Republican state legislatures have introduced over 320 anti-LGBTQ+ bills across the country, already surpassing last year’s record. Several states in addition to Arizona, including Idaho and Alabama, are trying to criminalize gender-affirming healthcare for trans youth. In South Dakota, trans students can’t play sports or use bathrooms and changing rooms consistent with their gender, and many other states are introducing similar legislation.

And in Texas, parents of transgender children can be investigated for child abuse, and children can even be separated from their parents.

These measures are not just cruel, they’re extremely dangerous. Queer youth in particular are already extremely vulnerable. They’re at much higher risk of physical and verbal abuse compared to their non-LGBTQ+ peers; over 87 percent of queer youth have experienced verbal or physical harassment and abuse due to their gender or sexuality. Queer youth are far more likely to be unhoused, unemployed, or precariously employed, and four times as likely to attempt suicide. And they’re at much higher risk of self-harm and suicide.

A key factor in preventing these devastating experiences is having supportive adults at home and in the classroom, and being able to access gender-affirming healthcare. It’s no exaggeration to say that the consequences of this transphobic onslaught could be deadly for trans youth. In fact, recent years have been the deadliest for trans people since records began in 2013.

As we’ve written previously, underpinning these attacks is the GOP’s new culture war strategy, which is squarely focused on schools as a place of conflict. From the panic around Critical Race Theory to bans on trans kids — especially trans girls — in sports, Republicans are hoping to reverse their electoral misfortunes and shore up support ahead of the 2022 midterms. They’re resuscitating the reactionary strategies that have helped them in the past, and are hoping to win votes by pointing to these hateful state-level victories.

These attacks are also part of a backlash against the 2020 Black Lives Matter uprisings. During this movement, queer kids of color were on the front lines, and there were huge mobilizations for Black trans lives. Young people in the U.S. are increasingly identifying as queer, and increasingly standing up for their queer peers — and they’re not afraid to use this power.

Viewed through this lens, the dangerous anti-trans rhetoric and legislation that we’ve seen in 2021 and early 2022 is only a prologue to what will come closer to the midterms — and in the leadup to the 2024 presidential election.

For their part, the Democrats aren’t mounting a meaningful opposition to these reactionary attacks. To be sure, the fact that President Biden made a proclamation for Transgender Day of Visibility and mentioned trans kids in his State of the Union address is significant. That prominent Democratic politicians are speaking out against these harmful laws points to the immense progress of several decades of social and political movements.

But Biden and the Democrats are limiting their actions to just that: speaking out. None of them are taking meaningful action to protect trans kids. As Ezra Brain writes,

…while Democrats may not explicitly support trans oppression, they continue to protect the structural oppression of trans people. To put this another way, access to gender-affirming care means little if it is completely unaffordable because of our privatized health care system. The right to participate in sports means little if you are freezing to death on the street because social services have been completely defunded. And being able to use the bathroom you choose means little if you’re locked up in prison or murdered by the police. So while the Republicans and Democrats may differ on the specifics of how to oppress trans people, they are in lockstep over the structural oppression of trans people.

In fact, their symbolic support for trans rights will allow Democrats to play the “lesser evil” card yet again, winning votes this fall by pointing to Republicans’ actions, even as trans kids’ lives continue to materially decline. The Democrats are no friends to trans people, and they have no solution for our plight or those of the youngest in our community.

The fight for trans youth cannot be left to the Democrats. History has shown that only struggle in the streets and the threat of struggle in our workplaces has forced the state to make concessions.

Nor can this fight be left to the LGBTQ+ community alone. The struggle demands working-class organization and solidarity across sectors. For example, educators have a critical role to play, and can making sure to safeguard academic freedoms to teach trans and LGBTQ+ topics, and to support their queer students. The importance of teachers has been made clear during the pandemic, and teachers could use their strategic position in society and their huge numbers to strike for trans rights and demand that these reactionary laws be dismantled. Recently, Minneapolis educators fought for better mental health support and more guidance counselors for students.

Healthcare workers, too, must join this struggle, especially as gender-affirming care becomes a battleground across the United States — care which should be free and easily accessible. Like teachers, healthcare workers occupy an essential, strategic place in society, and they must wield this power in defense of trans kids.

But this fight shouldn’t just be limited to the sectors that most come into contact with trans youth. Other workplaces should also demand concessions for trans and queer people. For example, earlier this month, Jezebel and other digital media workers went on strike, and among their demands was trans-inclusive healthcare for their colleagues. This kind of solidarity where we force concessions from workplaces, schools, and the government are how we win the fight for trans rights.

Trans kids have the right to live as their true selves. They have a right to healthcare, to play sports, and to feel safe in schools and among their peers. They don’t just have a right to stay alive — they have a right to a full childhood. Today, on Transgender Day of Visibility, let’s vow to fight for and protect them.