One Down, Three to Go: Fight the Cops and the Curfew

In a partial win for protesters, killer cop Derek Chauvin was finally arrested for the murder of George Floyd and taken into custody. But this comes hand in hand with a curfew, imposed by the National Guard. Now the fight begins against the curfew and for the arrest and conviction of all four killer cops. 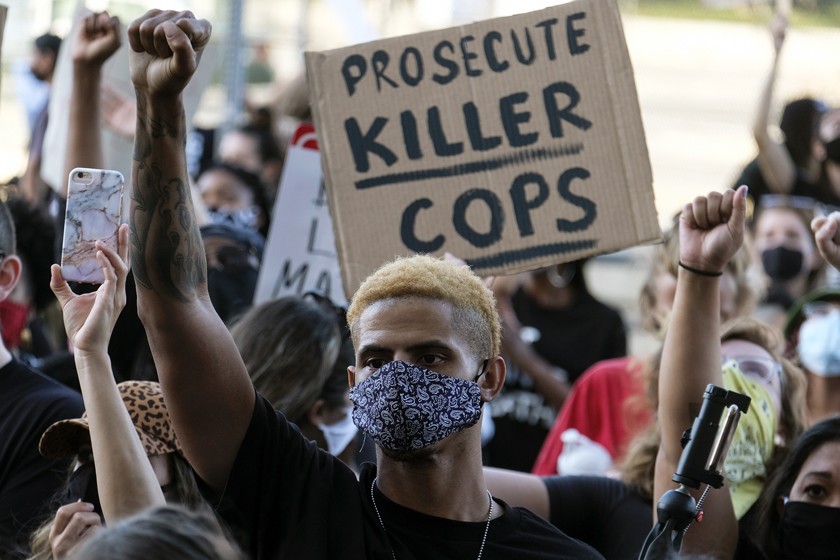 On Monday, May 25 Minnesota police officer Derek Chauvin murdered George Floyd, an unarmed Black man who was not resisting arrest. Chauvin held his knee against Floyd’s throat for 10 minutes while Floyd begged and pleaded, repeatedly saying, “I can’t breathe.” The crowd at the scene continued to ask the cops to stop while Chauvin and the three other officers  with him on duty jeered and joked among themselves. Chauvin and the other cops on the scene, all have had a litany of complaints filed against them, but none of them ever faced any retaliation thanks in large part to former Democratic nominee for President and former Minnesota prosecutor, Amy Kloubachar. According to the MPD, only two of the 18 complaints against Chauvin were “closed with discipline”.

While Chauvin was fired from the police force soon after the murder of Floyd came to light, it was not until today that any formal charges were filed against him or his fellow officers. By Tuesday morning, a video of the murder had gone viral, lighting the spark to a fire that now rages across the country. Shortly after Chauvin’s arrest, the Democratic mayor of Minneapolis, Jacob Frey, decreed a curfew in Minneapolis in a desperate attempt to quell the ongoing protests. While Chauvin’s arrest marks an important victory for those who are fighting against escalating police violence in the middle of a pandemic to protest this injustice, there is still much left to fight for.

As of now, Chauvin has been charged with third degree murder and manslaughter — minor charges considering the brutality of the murder. Meanwhile, the three cops who were complicit in Floyd’s murder roam free. This doesn’t even account for those higher up in the police chain, who have given orders and incentives to hyper-police Black communities or the other killer cops that hide behind the protection of police departments everywhere. Unfortunately, this partial victory comes hand in hand with further state repression of protests at  the hands of the National Guard. It’s effectively a “go home” victory: a concession by a ruling class attempting to rein in the growing anger of these protests. But, they won’t be able to. Tonight alone, there are protests planned all over the country, including in Minneapolis.

Is Arresting a Killer Cop a Win? In short, yes. A very basic one. But one that has long been denied the Black community. White cops kill Black people with impunity. Take the death of Tamir Rice, a 12 year old Black boy killed by the cops. No one was charged. Take Breonna Taylor, who just last month was killed when the cops busted into her house and shot her while she was asleep in bed. Worse still, her boyfriend who shot a legally obtained gun at the plainclothes officers who stormed into her home was arrested. He was only freed due to mass uproar.

But, arresting a killer cop is not the end of the story. Over and over killer cops get arrested, only to be acquitted a few months later as was the case with Philando Castille and Eric Garner. In this sense, it’s only a very partial victory to win the arrest: it would be a bigger victory to win a guilty charge— which almost never happens.

To stop these killings it is necessary to go higher up the food chain. Killer cops are the product of policies of policing not just individual bias or malice. The policies promoted by the entire police force should be investigated by an independent body and punished.

The police violence that we are witnessing is nothing new. Arresting one cop isn’t going to end a system of brutality. No doubt, the other three officers involved in Floyd’s murder must be arrested and convicted as well, which would symbolize a huge win for the protesters out demonstrating in the streets. But this is not a time to back down. The protesters must continue their fight beyond these arrests. It is time to amplify the call for justice until they take their foot off our throats.