One month of ‘KLASSE GEGEN KLASSE’

Since November 16, klassegegenkasse.org has given voice to the struggling workers, refugees, women and LGBT people in Germany. We publish current news from a working-class perspective, but this is just the beginning! 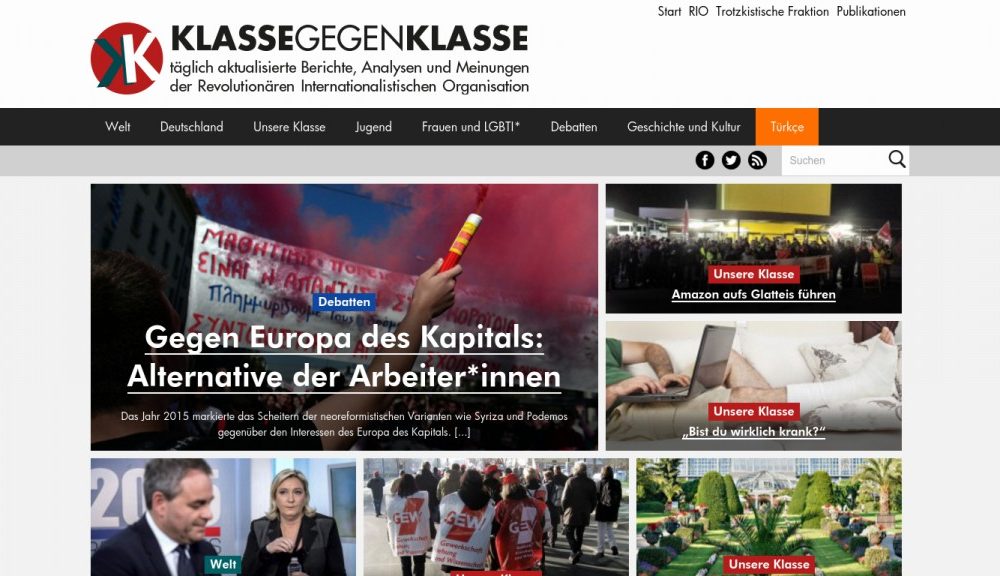 This is a translation of an article originally published Dec 16, 2015 in Klasse Gegen Klasse

The new website, KLASSEGEGENKLASSE.org just turned one month old.
Since the 16th of November, 102 articles have been published–about 3 per day. We’ve had more than 11,000 visitors and 21,000 views during this time period. We were able to nearly triple the reach of our ideas, which is an important leap that justifies the effort.

You can find analysis, interviews and commentary on german and international politics, the economy, as well as news on the struggles of workers, youth, refugees, women and LGBT* people – always from an anticapitalist point of view.

This website is part of an international network of digital newspapers based in Argentina, Brazil, Chile, Mexico, France and the anglophone world. It was founded a year ago with the launch of La Izquierda Diario in Argentina and quickly expanded. In particular, the French Revolution Permanente and the Brazilian Esquerda Diário quickly became the most important sites of the radical left in their respective countries.

These digital newspapers are advanced by the Trotskyist Fraction – Fourth International (FT-CI), an international current to which also the German Revolutionäre Internationalistische Organisation (Revolutionary Internationalist Organisation-RIO) belongs. Our German website isn’t yet at the level of its sister websites in Spanish, Portugese or French – not only because of our limited resources, but also because of the reactionary situation in Germany.

Nevertheless, we’ve done our best to spread the most important struggles against the shift to the right in Germany. This includes the workers’ strikes at Amazon and Lufthansa and the students’ strike against racism in Berlin and other cities. Reports about many protests against military drives and fascist demonstrations were often published the same day on our website.

We not only report on strikes and demonstration, but we also intervene as an organisation of the revolutionary left in these movements from a proletarian and internationalist perspective. This is one of our main differences with bourgeois media. This is reflected in our statement to develop KLASSEGEGENKLASSE.ORG as an organ of the oppressed.

After the November 13 Paris attacks, we quickly published analyses of the situation. We reported live on the restriction of democratic rights and the attempts of the radical left and the workers’ movement to fight against the state of emergency.

We published texts about the most important debates within the international left, ie., the debates about the shift to the right of the neo-reformist parties Syriza and Podemos. We’ve reported on the electoral success of The Left and Workers’ Front in Argentina, which got one million votes, as an counterexample.

We also wrote about debates of the german Left. We exclusively covered the fights of wings in the Linksjugend-Solid Hamburg and published a comment about the National Conference of the Socialdemocratic Youth Organization.

The issues of women and LGBT* have special presence on our website. We reported on the struggles of the Pan y Rosas socialist women’s organisation in Madrid and Mexico City, as well as protests in Berlin. We want to thank the Mädchenmannschaft for linking to our articles.

We’ve already published seven articles in Turkish. We try to make the most important analysis and debates of our international current more accessible for Turkish-speaking people. But we have also critically engaged with the politics of the Kurdistan Workers Party (PKK).

We will expand KLASSEGEGENKLASSE.ORG in the following months. For this task we plan to make regular columns and improve our video work, but for this task we need your support. Let us know if you have critiques, comments and information.

Please send us an email if you know about struggles that we should report on. Send us texts to publish. With this, we want to strengthen our site as a point of reference for the revolutionary left in Germany and for the organization of workers and youth and to strengthen their fights.