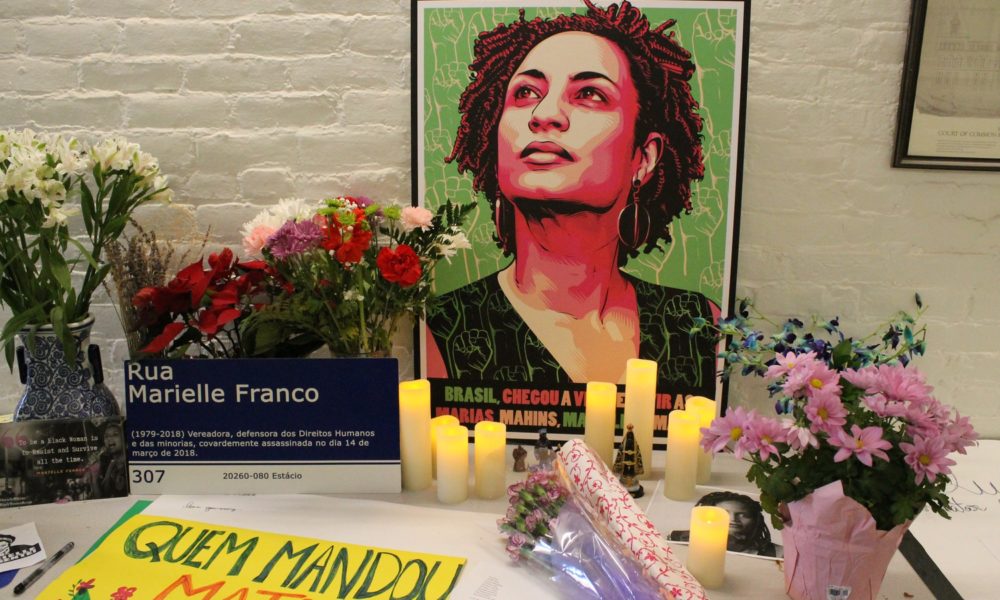 Almost one year after the assassination of Rio de Janeiro’s city council member Marielle Franco, an arrest has been made in the case. Retired police officer Ronie Lessa, 48, and former police officer Élcio Vieira de Queiroz, 46, were arrested Tuesday for Franco’s murder and that of her chauffeur, Anderson Gomes. But, these former police officers did not act alone. Who ordered the assassinations remains unknown after a sluggish investigation, more interested in containing struggle than finding out who killed Marielle.

Franco, a queer Black woman, feminist and member of the Socialism and Liberty Party (PSOL), was elected to Rio de Janeiro’s city council in 2016. Brazil had undergone years of economic and political turmoil, culminating, at the time, in a coup d’état coordinated by the right wing, a U.S. trained judiciary and media monopolies. The coup replaced President Dilma Rousseff with Michel Temer, whose administration swiftly implemented vast austerity cuts and pro-business labor reforms. This was merely the beginning of an onslaught of attacks on the working class and poor, disproportionately affecting women and people of color.

In January 2018, Temer signed a decree allowing the armed forces to intervene in public security in the state of Rio de Janeiro. Franco, as an elected official and activist, fiercely criticized the federal intervention, advocating on behalf Rio’s shantytowns, or favelas (like the Maré district where she grew up), whose residents face genocidal police violence.

On March 14, 2018, Franco moderated a debate on the role of young Black women in politics in Rio’s city center. She left the event with her assistant and a driver, and about 30 minutes later, they were stopped on the road by a car. Thirteen shots were fired. Franco took three bullets to the head and one to the neck. Gomes was struck by three shots to his back. Both died on the scene.

Massive mobilizations took place around Brazil over the next few weeks. Who killed Marielle? was a rallying cry against the growing right wing and the police forces that murder with impunity. Many argued that the repressive police forces who were likely involved in her murder shouldn’t be the people investigating the case; rather an independent investigation led by workers and favela residents are the only ones who could investigate fairly and quickly. 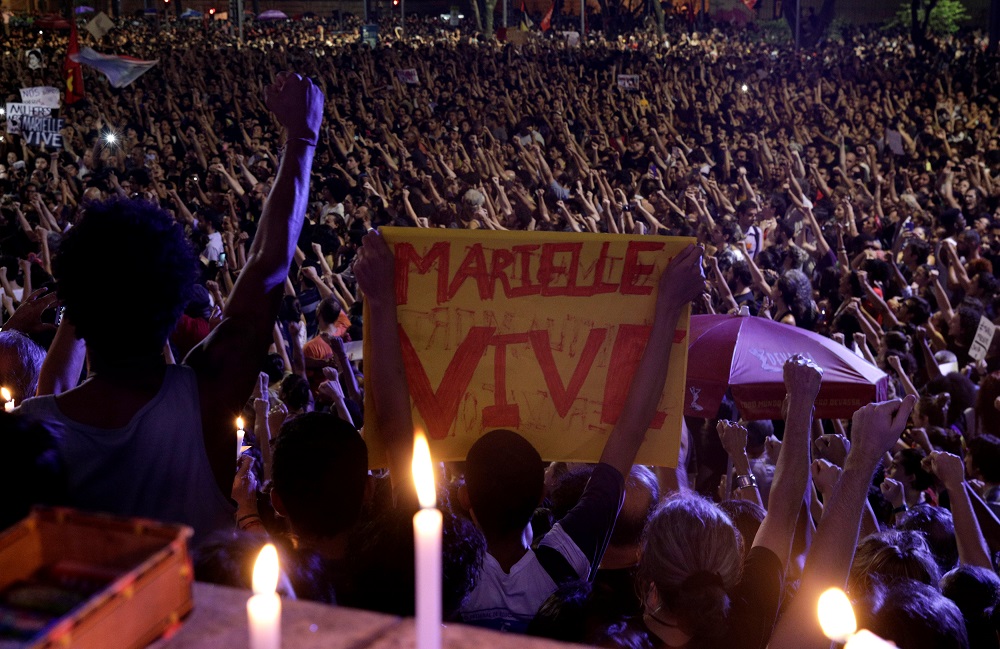 The police investigation dragged on for a year. Nothing seemed to be happening. In the meantime, the strength of the right wing increased, with Presidential favorite Lula being put in jail and Bolsonaro winning the Presidency. Marielle became a symbol of resistance against these right wing forces, particularly in the massive “Ele Nao” mobilizations against Bolsonaro that took place only a few weeks before his electoral win.

During Carnival of this year, the winning samba school in the nationally (and internationally) televised parade centered the question: Who Killed Marielle? Taking up a history slavery and violence against Black people, Manguiera’s parade featured Marielle in the midst of the revelry of Carnaval. 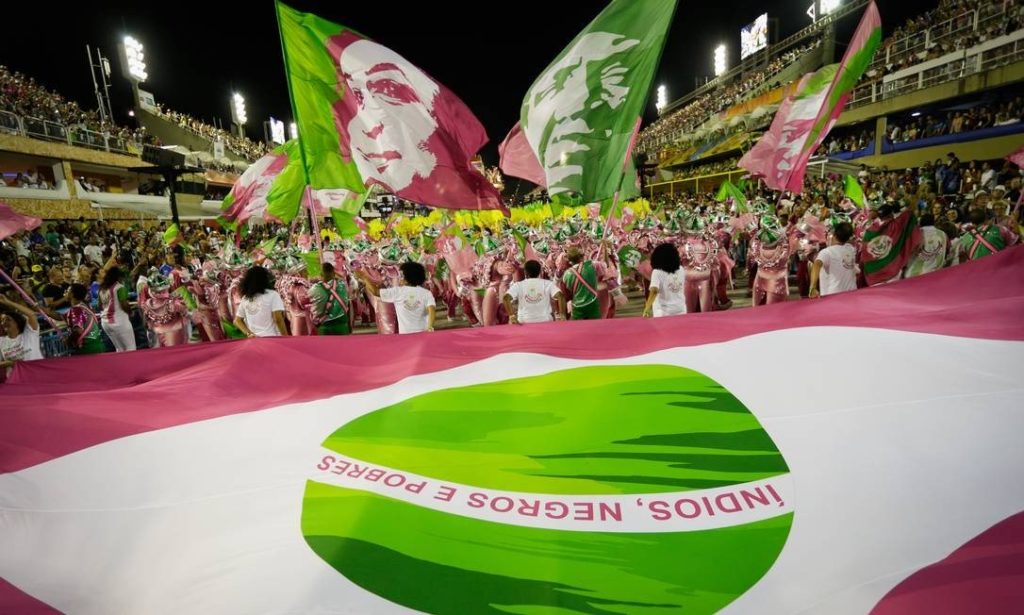 Now, almost a year after her murder, two people were taken into custody. Ronie Lessa is accused of firing the shots killed Franco and Gomes, while Queiroz allegedly drove the car used in the crime. The public prosecutor’s office has charged the two men with two counts of first-degree murder and the attempted murder of the congressional assistant Fernanda Chaves.Lessa was found to have thoroughly researched Franco on the internet, as well as Marcelo Freixo, another socialist congressional representative who has received several death threats.

Both have ties to the Bolsonaro family. Queiroz was a member of a police crime ring when he worked as a security guard for underground gambling dens in Rio.  Photographs of Queiroz with Bolsonaro grinning from ear to ear suggest links between him and the president and his family. Lessa was arrested in his home in the same upscale beachfront Rio de Janeiro condominium where President Jair Bolsonaro also owns a home. Police reports claim that he dated one of Bolsonaro’s sons. Yet, none of this answers the central question: Who ordered the assassination of Marielle Franco?

The state is responsible for the killing of Franco.

It is responsible for the total absence of justice, as we have seen with the sluggish investigations, facing multiple obstructions and subject to secrecy intended to protect whoever ordered this politically motivated crime.

Given the judiciary’s authoritarianism and its central role in the right-wing coup that brought the far right’s rise to power, we cannot expect the courts to bring justice for Franco and Gomes. Thus, one year later, we still demand that all evidence be made public. The state cannot and will not answer “who ordered the killing of Marielle Franco” so there must be an independent investigation led by social movements and trade unions. We must urgently demand that the state provide resources and all necessary conditions for carrying out an independent investigation by providing material and archival resources to human rights groups and experts committed to the cause, and that PSOL congresspersons, human rights organizations, trade unions, and community-organizing groups may be involved in the investigation. But, there will only be an independent investigation if it is forced on the government by a powerful grassroots movement.

There are mobilizations planned today in all major Brazilian cities. In Rio de Janeiro, Marielle’s home, several sectors of universities have voted a 24-hour stoppage in honor of Marielle and in order to attend the evening’s protests.

Today, on Thursday, March 14, one year after the murders, our anger will ring throughout the streets of Brazil: Who ordered Marielle assassinated?