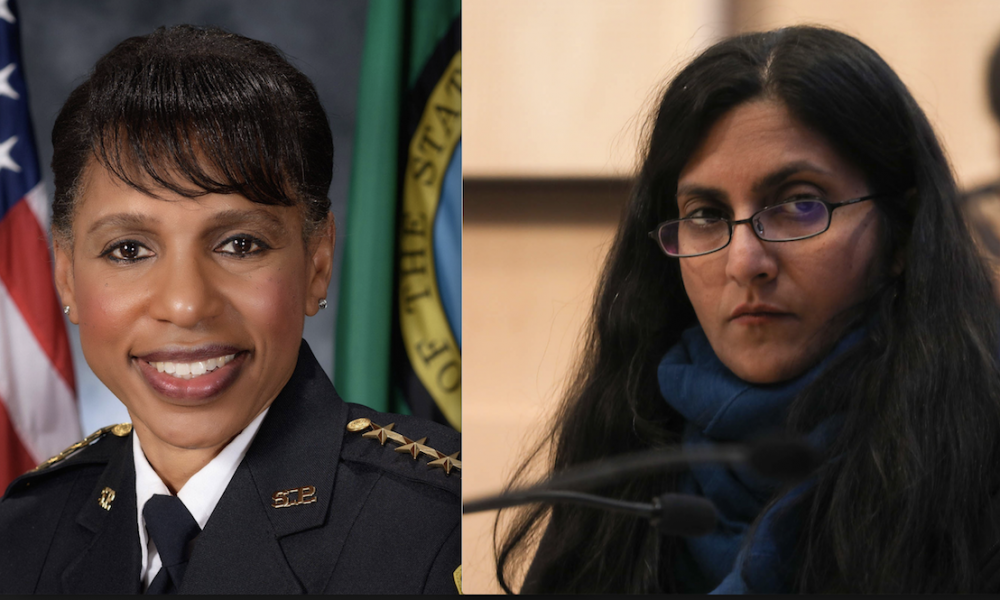 We were disappointed to read about your vote at the August 13 meeting of the Seattle City Council. Carmen Best was confirmed as Chief of the Seattle Police Department – unanimously, by a vote of 8 to 0. This means you, the only socialist on the council, also voted in favor of confirming the new head of a police department.

The Seattle Times explains your reasoning: “Sawant said she would vote for Best […] in solidarity with community members pushing for Seattle’s first permanent African-American chief, ‘who overwhelmingly have urged me not to stand in the way.'”

Socialists are opposed to the police

Kshama, you are currently the most prominent socialist elected official in the United States. You won an election without joining the Democratic Party and are a member of Socialist Alternative, a Trotskyist organization,. As such, you have a tremendous responsibility to present the ideas of socialism to a new generation thirsting for alternatives to capitalism.

Socialists, going back to Karl Marx, have always been irreconcilably hostile to the police because the police are the “chief instruments of state power”, as Lenin put it. All socialists know that the state exists to defend the privileges of the ruling class. Marx explained that workers, in order to liberate themselves, will need to destroy the capitalist state apparatus. This is impossible without smashing the institution of the police.

Every successful revolution in history has involved working people standing up to the police and winning. This was true of the Paris Commune in 1871 and of the Tahrir Square Uprising in 2011. In every successful mass uprising, the police are forced to surrender and drop their weapons.

More and more people in the United States are realizing that police are an institution for brutal repression. They murder black men while enjoying complete immunity, repress and attack left protestors, and regularly protect neo-Nazis. This means that the traditional Marxist demand – to break up the police and replace them with self defense organizations democratically organized by working people – can reach a larger audience than ever before.

You have said correctly that the Seattle Police are a “rotten tree” and not a healthy tree with a few bad apples. But the problem with supporting the police goes far beyond acknowledging the bad leadership of one specific police department. The police exist to defend the private property of a tiny minority of capitalists and employ every form of oppression.

In addition to having, as their main function, the protection of the property of the wealthy, the police force is a deeply racist, sexist and homophobic institution. This is not a problem of “bad cops” – even if “good people” become cops, they play this oppressive role. We have seen examples of this all over the country; it does not make any difference if women or people of color are made police chiefs, just as U.S. capitalism did not become any less racist after the election of the first Black president.

The Seattle Police Department is no exception. In 2014, to cite just one example, a SPD officer shot Oscar Perez-Giron after he was initially questioned for not paying his light rail fare. When he tried to escape, the officer killed him. Of course there were no consequences for the officer, let alone for the institution. Another police killing in your own state was that of Antonio Zambrano-Montes, who was shot and killed by Pasco Police while his hands were up in surrender (this according to Socialist Alternative’s own website). And this is precisely what police are there to do: to keep down working people, using deadly force if necessary.

Voting for a police chief because some community members are in favor of electing an African-American uses extremely dangerous logic. Followed to its conclusion, it would also justify support for Barack Obama, who at the time of his campaign got even more enthusiastic support from Black community leaders. The eight years of his presidency have made amply clear that he did nothing more than provide cover for a deeply racist system. This is why all socialists in the U.S., including your own organization, opposed Obama from the beginning.

We call on you to re-think your position and come out strongly against the capitalist police. We call on all comrades in Socialist Alternative and its international tendency, the Committee Workers’ International (CWI), to debate this position.

Unfortunately, the CWI has an tradition of supporting police in various contexts, including supporting their unionization efforts, which only serve to make conditions more favorable for them to harass and brutalize working people, disproportionately People of Color. In Britain, the Socialist Party (CWI) has gone as far as to accept the leader of a prison guards’ “union” into their ranks as a member of the party. As we argued before, this runs entirely counter to the analysis and goals of the socialist movement.

We think socialists in the United States should offer no support to police under any circumstances. A goal of the socialist revolution will involve disarming and abolishing the racist police, calling for democratically-organized self-defense by working people, people of color, youth and LGBTQ people. Your organization could play an important role in such a campaign that would link the socialist movement with the most oppressed sectors in U.S. society.

The Left and Workers Front in Argentina has a program that is completely opposed to the police and received over one million votes in the last election. In the current political climate in the U.S., with a growing interest in socialism, we must now more than ever make the socialist position on the role of the police abundantly clear.