Operation Safety Net: Safety for the Ruling Class, Trauma for the Masses

In a city with more than 3,000 National Guard soldiers, protesters defy the militarization and protest racism, police brutality, and the increasing presence of repressive forces. 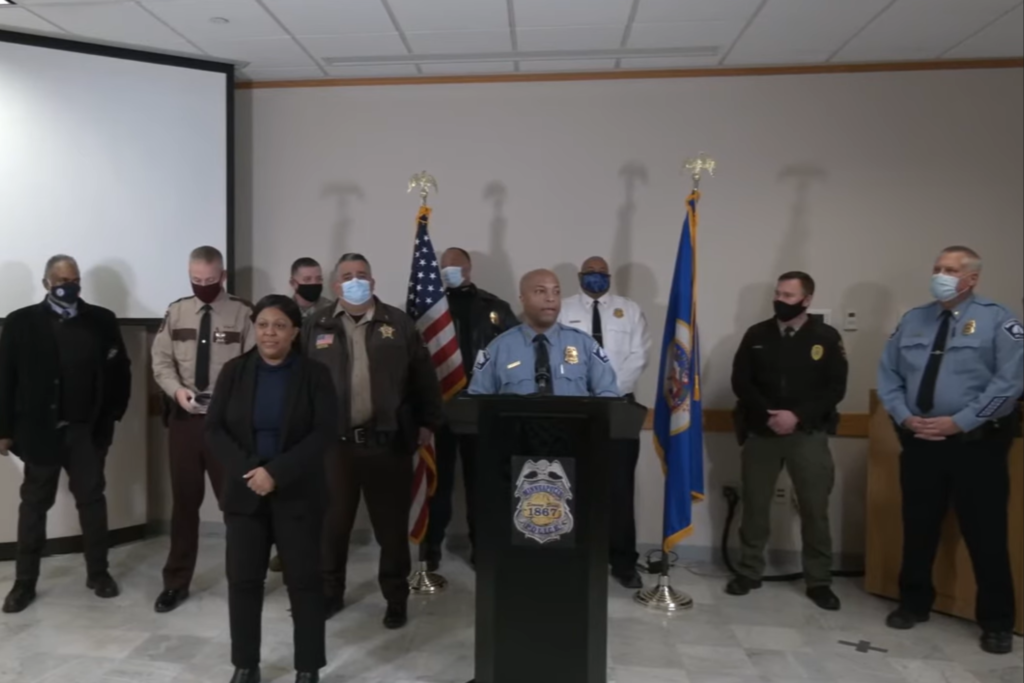 Last summer, the murder of George Floyd by former police officer Derek Chauvin sparked a rebellion against racism and police violence that had a national impact. That anger and distrust of police remain present in current debates in Minneapolis about reforming or defunding police.

This year, fearful of another uprising during the Chauvin trial, elected officials and law enforcement leaders quickly militarized the city of Minneapolis. Almost overnight, government buildings were surrounded by razor wire fences, and National Guard stationed around the twin cities. Minneapolis started to look and feel like an occupied territory.

State and local officials announced the creation of Operation Safety Net, which consists of nine local and state policing agencies. This includes local police departments, state patrol, transit police, the U.S. Department of Homeland Security, and even the Minnesota Department of Natural Resources. Operation Safety Net is under a “unified command,” which its website defines as “multiple voices from involved agencies [that] contribute to the operational decisions.” It is unclear who exactly is responsible for what decisions under their “unified command.” For the people protesting on the streets, however, “unified command” appears to have a unified purpose: to repress the protests for Black lives against racist police murders.

It did not take long for the brutal repression of Operation Safety Net to play out. As Twin Cities residents repeatedly watched clips of Chauvin’s knee on George Floyd’s neck, which were played during Chauvin’s live-streamed trial, the police killed 20-year-old Daunte Wright at a traffic stop in Brooklyn Center, Minnesota. As protests broke out outside the Brooklyn Center Police Department, police and National Guard unleashed brutal force against protesters, journalists, and medics.

On the night of April 14, rank-and-file union members who have supported the fight against police brutality and systemic inequality mobilized at their labor center in St. Paul when they heard it was being used as a base of operation for the National Guard. The union members learned that a local president of another union had given the National Guard access to the building without the knowledge of members of any of the unions that own the building. Over the phone, these rank-and-file members directly confronted the person in charge of the federation, who ultimately came down to the union hall and asked the National Guard to leave.

These anti-racist union members — who successfully forced the National Guard to leave their union hall — opposed the presence of the National Guard in their labor center and in the city of Minneapolis because the guard was being used to brutalize protesters. The National Guard’s presence in Minneapolis was also a traumatic reminder of racist police violence for many Black and Brown workers. One union member present that night was Cliff Willmeng, a registered nurse and member of Minnesota Nurses Association (MNA). In his Facebook livestream video, he said, “Is it [the National Guard and Operation Safety Net] here to protect unarmed Black folks from being extrajudicially executed by the police force? No. It’s here to protect property due to the legitimate and genuine community response to racist police violence, not just in the Twin Cities but all across the country.”

An analysis by the Guardian showed that over 90 percent of charges against those protesting Floyd’s murder were dismissed, suggesting a lack of evidence for bringing charges in the first place. The official justification for the overpolicing and hypersurveillance of protesters and community members is without merit.

After the night of April 14, different unions issued statements both for and against the expulsion of the National Guard from the Saint Paul Labor Center. The St. Paul Federation of Educators said it was “deeply disappointed” that the union hall was allowed to be used as a staging ground for the National Guard. Its statement also noted “that the decision may have been made by individuals without consulting other affiliates,” and that this “sent a message to workers that live in Saint Paul, BIPOC union members, that their lived experience has no value, and deserve no voice, in our labor community.” Kieran Knutson, president of CWA 7250, said in a Facebook video that — for a union — supporting the working class and oppressed people is not just the right thing to do but the only thing to do.

The unions that spoke against the anti-racist actions of union activists on April 14 alleged that these union members disrespected the National Guard. This feels like a deliberate attempt to deflect blame by the conservative union bureaucracy. The union bureaucracy is trying to hide both its undemocratic methods and its weak anti-racist stance by attacking the union rank and file for allegedly disrespecting the Nation Guard. Minnesota Nurses Association (MNA), for example, paid lip service to the idea that systemic racism exists and to “the pain and trauma being experienced by the BIPOC community,” then went on to declare, in the same statement, its gratitude to the National Guard “for their service.” This statement from MNA also contradicts its previous statement on the murder of Daunte Wright, in which it declared that the world MNA wanted to win “requires that we confront racism head-on, in our workplaces, in the justice system, and on the streets,” and that “the government’s decision to respond to protests of this latest police killing with militarized force will only exacerbate the trauma we are seeing in our patients, students, and loved ones.”

The Ruling Class Sticks Together

Not surprisingly, both representatives of the parties of capital (Democratic governor Tim Walz and Republican House minority leader Kurt Daudt) condemned the actions of union activists. This clearly signals their class interests, for which the use of force to suppress rebellions and protect capital is everyday business. Walz and Daudt alleged that the union activists’ standing up for racial justice and against state-sanctioned violence was disrespectful to the members of the National Guard. Republican lawmakers are also moving to draft a resolution in support of the National Guard and condemning the actions of the anti-racist rank and file. Afraid that the current level of militarization would fall short to suppress another multiethnic uprising, Walz has also declared a peacetime emergency in the Twin Cities and requested assistance from law enforcement agencies in Nebraska and Ohio.

Scott Wasserman, a public information officer for Operation Safety Net, has said the operation’s mission “is to preserve and protect lawful First Amendment non-violent protests and demonstrations.” This stated mission contradicts the accounts of protesters on the ground who were assaulted by police for simply being present at the protest. Satura Dudley, a founding leader of Cell A65, an organization formed last year after protests against police brutality in Alabama, was in Minneapolis to express solidarity with Daunte Wright. She was one of hundreds of nonviolent protesters attending a vigil when the National Guard and police assaulted them. Dudley said, “They didn’t give us a curfew warning. We didn’t get a message.” She was tackled by police and shot with a rubber bullet.

Opposition to the National Guard and Operation Safety Net Is Increasing

On Thursday, April 15, the Eastside Food Co-op in Minneapolis asked the National Guard to stop using its parking lot and not return. A coalition of more than 35 organizations has called on Governor Walz to end Operation Safety Net. Community and labor activists are also calling for national solidarity in their fight to end Operation Safety Net, the attack on the democratic right to protests by police and the National Guard, and for all charges to be dropped against protesters who were arrested.

On April 17, health workers spoke in front of the Brooklyn Center Police Department against the use of “less lethal” weapons (tear gas, rubber bullets, and pepper spray) on protesters. University of Minnesota researchers also published a study finding that 40 percent of those injured from projectiles during the George Floyd uprising (and who were medically evaluated) were injured in the head, neck, or face, and that injuries sometimes resulted in blindness and traumatic brain injury.

It has become all too clear that lawmakers and union bureaucracies are not on the side of the working class and the oppressed. To maintain their racist capitalist hierarchies, they will continue to undermine our struggle by co-opting our movements and bringing in law enforcement to militarize our cities and our lives. Working-class people should not fall for their performative and disingenuous “anti-racist” stances and must recognize the oppressive role that law enforcement of all stripes play. Operation Safety Net is but one expression of a larger trend of militarization. It is up to us to fight the militarization of the streets.