Our Lives Are Worth More Than Their Profits

Going to work shouldn’t be a death sentence. Eight workers died and eight more are still missing at Mayfield Consumer Products, a candle factory in Kentucky. Six died at an Amazon warehouse in Illinois. Our lives are worth more than their profits. 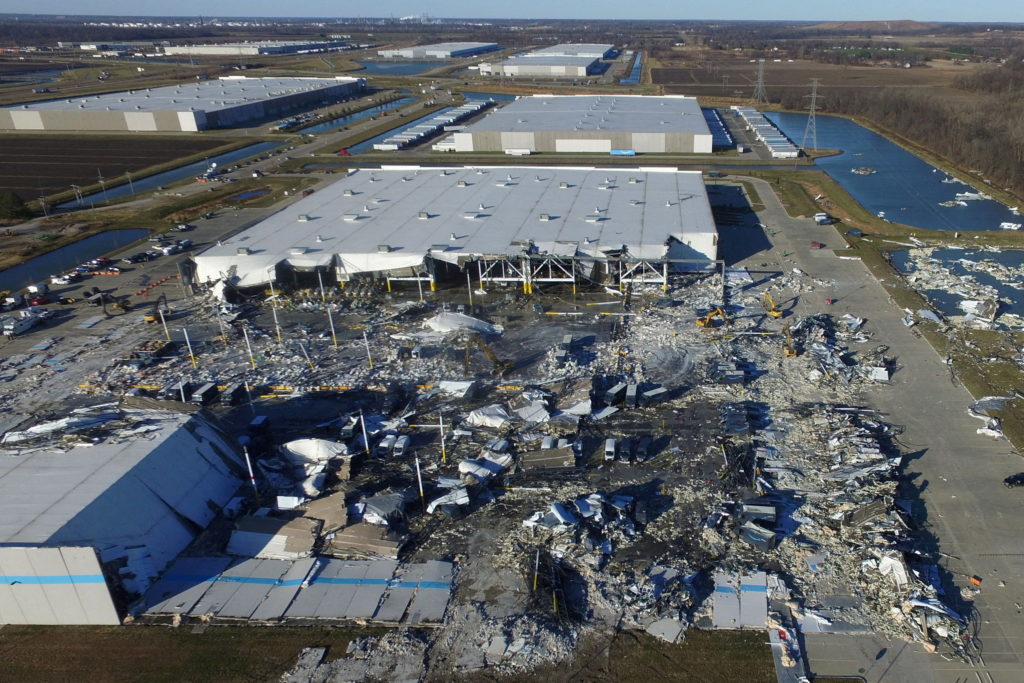 The site of a roof collapse at an Amazon.com distribution center a day after a series of tornadoes dealt a blow to several U.S. states, in Edwardsville, Illinois, U.S. December 11, 2021. REUTERS/Drone Base/File Photo

Going to work shouldn’t be a death sentence. Eight workers died and eight more are still missing at Mayfield Consumer Products, a candle factory in Kentucky. Six died at an Amazon warehouse in Illinois.

Both companies proceeded with business as usual amidst tornado threats. They forced people to stay at work in unsafe conditions.

Haley Conder, 29, said she was one of a number of employees who approached three managers at Mayfield Consumer Products after the tornado alarm rang a second time. “‘You can’t leave, you can’t leave. You have to stay here,'” Conder said the managers told the group.

Below are text messages by Amazon worker Larry Virden to his girlfriend.

As Larry text messages show, workers were denied the right to leave and find adequate shelter during the storm. In the end, Larry didn’t make it home. He was one of the six people who died at Amazon.

These deaths and the dozens of people injured are not a product of a natural disaster, they are the consequence of employers’ negligence and their conscious decision to risk hundreds of workers’ lives to continue making profits.

The pandemic showed in stark relief the fact that the bosses don’t care about our lives. For them we are disposable. While CEOs make millions of dollars each year, no measures are taken to guarantee workers a safe workplace.

These companies were criminally irresponsible with the lives of workers and should be held accountable. We must call for immediate compensation for the families of those lost and injured.

It is our right not to go to work in unsafe weather conditions. This should be guaranteed by law to every worker, especially now that capitalism-driven climate change has ensured that natural disasters will become more frequent.

The bosses won’t keep us safe; they only care about profit. Workers are the only ones who know what is safe and what is not. We should decide whether to continue working or not. For that purpose, we need to fight for Health and Safety Commissions to be set up in all workplaces that will function independent of the bosses, that are democratically elected, and that can organize to impose protocols and shut down production when necessary.

Not one more dead worker at the hands of the bosses! Our lives are worth more than their profits!