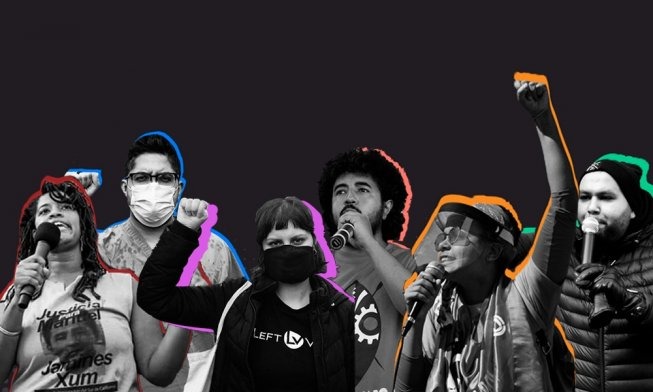 Around the world, these three words have echoed in the streets as millions join the movement sparked by the murder of George Floyd. In the United States, The New York Times says that this is the biggest movement in U.S. history, with some polls showing that 10% of adults in the U.S. took the streets.

In France, the U.K., and Germany, hundreds of thousands mobilized as well, with African immigrants leading the way.

This comes in the context of the coronavirus pandemic, which has disproportionately affected Black people across the world due to the racism endemic in national healthcare systems and institutionalized poverty. In the wake of this healthcare crisis, police violence against the Black community has only increased. Nowhere is this clearer than in Brazil.

Around the world, people are talking about abolishing the police. We take up this demand, and believe that to abolish the police, we need to fight against the system that the police protect — the racist, capitalist system that defends the immense profits of the few at the expense of the vast majority of poor and working class people around the world.

In this context, Left Voice and the Trotskyist Fraction are hosting an international rally of revolutionary socialists to discuss the Black Lives Matter movement and police violence internationally. A comrade in Bolivia will speak about imperialist violence and a comrade from Chile will speak about police violence against the Mapuche indigenous people. The event will take place on Saturday at 2 pm. You can watch on leftvoice.org or on Left Voice’s Facebook page.

Here are some of the speakers.

Julia Wallace (United States): Julia was born into a radical tradition: her mother was Black Panther and raised her with lessons of Black Power and the need to fight for Black liberation. She’s been in the Trotskyist movement since she was a teen, seeing the need to organize the working class to fight against all forms of oppression. She’s now a social worker in Los Angeles, working with unhoused people, and is a member of SEIU Local 721. She is a tenants rights activist and has served on the South Central Neighborhood Council. Julia argues in Racism is a Pre-Existing Condition , “Capitalism and capitalist governments have nothing to offer working class and oppressed people but death and misery. But the multiracial working class has the power to transform society, to begin the work of ending racism and oppression, to finally, once and for all, create a society of equality and abundance…Racist capitalism is a disease; workers and oppressed people fighting back is the cure.”

Anasse Kazib (France): Anasse is the son of Morrocan immigrants and raised in the suburban outskirts of Paris, which are a constant target of police violence. This experience, along with workplace struggles, radicalized him. He has since joined the Revolutionary Communist Current, a group within France’s New Anti-Capitalist Party. Anasse is a railway worker and helped organize the massive strike earlier this year that raged on for well over 50 days. Arret Sur Images, a prestigious news blog in France, described Kazib’s intervention in the following way: “From the megaphone to the microphone, it’s just one step. At least that’s what you’d think from the sight of Anasse Kazib’s route. This 32-year-old railway worker has gone from being a very active SUD Rail trade unionist on the track to a regular guest on TV sets….[Audiences across France] listen to his speeches on a wide variety of subjects, from railway reform or pension reform to a polemic on the veil, Muslims, the CICE (Employment Competitiveness Credit) or climate change.”

Marcelo Pablito (Brazil): Marcelo Pablito is one of the leaders of the Brazil’s revolutionary socialist group MRT and a leader of the MRT’s Afro-socialist group, quilombo vermelho. Quilombos were escaped slave communities in Brazil, sometimes made up of thousands of people who would fight together to attack slave owners and free slaves. Quilombo vermelho takes up this history of struggle, alongside Marxist theory and working class struggle around the world. Pablito is not just an Afro-socialist leader — he is also a cafeteria worker at São Paulo University Hospital. He has organized workshops about Black history and encouraged his union to take action against trans femicide. Additionally, Pablito is one of the co- authors of “Revolution and Black Liberation,” a Marxist perspective of Black struggle in Brazil. In the prologue to the book, Pablito argues that “Just as Black Haitians defeated Napoleon to gain independence and free themselves from slavery, the working class of the 21st century must take political power and defeat the racist bourgeoisie so a new society can be built.”

Mike Pappas (U.S.): Mike Pappas is a medical doctor in New York City and a revolutionary socialist. He was on the front lines of fighting the coronavirus, watching overcrowded hospitals fill to the breaking point. When New York City was the epicenter of the virus in the U.S., Mike said, “Donald Trump is calling himself a war President, at war with this virus. But nurses and doctors like me are not only waging a war against the virus, but also a class war against Trump, the capitalists and the capitalist government.” During the recent uprising, Mike was arrested while attempting to provide medical help to protesters. Mike will be discussing the connections between the coronavirus crisis, institutional racism, and the recent uprising.

Maryam Alaniz (U.S.): Maryam is a 24-year old queer graduate student and university worker in New York City. She is the daughter of Iranian immigrants currently suffering under U.S. sanctions as well as Iran’s brutal regime. She turned to socialism within the last two years, radicalized by the Bernie Sanders campaign and attracted to the DSA, of which she is still a member. She went from identifying as a socialist to a revolutionary socialist by watching the capitulations of Democratic Party politicians, including Sanders himself, as well as reading the works of Lenin, Luxemburg, and Trotsky. She is now an active part of the mobilizations and spent the last week at the City Hall encampment in New York City.

Leticia Parks (Brazil): Leticia is a teacher, a Black bisexual woman, a leader of the Revolutionary Movement of Workers in Brazil, and one of the founders of quilombo vermelho. Daughter of public health workers, she saw the withdrawal of resources from public health first hand as a child. This lack of access to healthcare profoundly affects the Black Brazilian masses, who are the vast majority of those killed and infected by coronavirus. Leticia has participated in various struggles in the university alongside the subcontracted workers and in the struggle for the right to free entry into universities. She was on the front line of student struggles and the fight against police violence that massacres working class and Black women in Brazil.

In a statement announcing the rally she wrote,“On July 11, the Trotskyist Fraction Fourth International will hold an international rally discussing the strategic legacy of Marxism and its connection to the strength of the working class and particularly of Black people who are mobilizing in the spirit of socialist revolution. This is an exciting task of which thousands are already a part all over the world, and which we invite more individuals and organizations to participate in. We are dedicated to recovering the legacy of revolutionary Marxism that is traced in the history of Leon Trotsky, Lenin, and Rosa Luxemburg. We take up this legacy to intervene in class struggle, in our places of work and study, and to prepare to strike a definitive blow against this capitalist system that does not deserve to exist. Instead, we fight for a future built by the hands of the most oppressed — Black and Brown, LGBTQ, and the working class as a whole.”