Our Struggles Are United: Black Solidarity with Palestine

The Black struggle and Palestinian liberation have a long relationship of solidarity and a common enemy: imperialism. 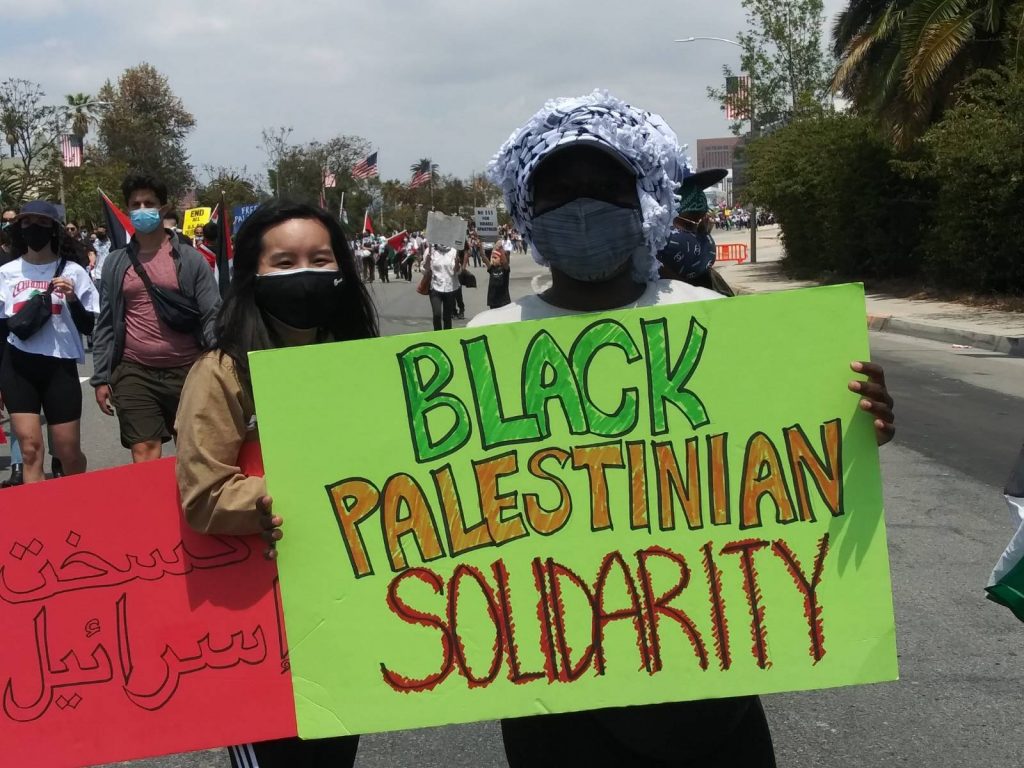 On Tuesday, Palestine held a general strike against the bombings in Gaza and the occupation of Palestine. On the eve of this strike, Israeli bombing left 212 dead including 61 children and 31 women. Even the building that housed headquarters for Al Jazeera and the Associated Press was bombed, an act of aggression against the press which violates their democratic right to report on Israeli government atrocities.

These attacks on Palestine have led to massive demonstrations in cities around the U.S. and the world with many communities declaring solidarity with the Palestinian struggle. In the midst of these protests, Black people and protesters from the Black Lives Matter movement have been front and center.

Black revolutionaries have long supported and seen themselves as part of the struggle for Palestine and vice versa. Malcolm X stated, “In short the Zionist argument to justify Israel’s present occupation of Arab Palestine has no intelligent or legal basis in history.” Angela Davis has also been a staunch supporter of Palestine and has backed their anti-Zionist colonial efforts, saying, “… for those everywhere struggling against racism and for freedom, the Palestinian people continue to serve as an inspiration because they have endured and remained steadfast for so long, refusing to give up and accept permanent subjugation and injustice.” The Black Panthers frequently made clear the links between the Zionist Israeli occupation and U.S. imperialism in their newspapers.

The struggle against racism in the United States has a lot in common with the struggle for the liberation of Palestine. Because of the racist foundations on which the U.S. state was built, police departments are direct heirs to the slave patrols used to repress the struggle of Black people, first under Jim Crow laws and then under segregation and criminalization. The police in the U.S. have used the methods of an “occupying force” against Black neighborhoods —a force that is free to harass, and murder Black people with near impunity. The Palestinian resistance that has confronted the Israeli army has always been an inspiration and source of solidarity for the Black liberation movement that many times in its history has had to confront a racist state.

Palestinians have also supported the Black struggle. During the 2014 Ferguson uprising, they showed solidarity by communicating with on-the-ground Ferguson activists about how to deal with the tear gas used by police. The same tear gas company was also used by the Israeli military against Palestinians. Police departments throughout the U.S. go to Israel to be trained in “introgration” techniques — torture by any other name.

In 2020, during the massive Black Lives Matter protests against the murder of George Floyd, Palestinians protested in Gaza and the West Bank. They made murals for George Floyd and denounced then-president Donald Trump for repressing protesters.

The Palestinians have never stopped fighting the occupation but the protests this past week have shown a renewed energy against the Israeli government’s atrocities and against U.S. imperialism. The Biden administration in particular is facing criticism for defending the slaughter of Palestinian civilians, including dozens of children, and for providing hundreds of millions of dollars in military aid to continue the oppression and murder of Palestinians.

The Israeli government would not be able to continue the massacre if it were not for the massive funds from the United States. The U.S. gives more aid to Israel than to any other country in the world — $3.8 billion in 2019 alone. This has been the case for decades. The bombs are manufactured and sent from ports in the United States. Similar to the Italian workers who said they would refuse to load weapons sent to Israel, workers in the U.S. can refuse to participate in aiding a racist system.

In the summer of 2020, port workers in the U.S. went on strike on the west coast in solidarity with the BLM movement. There was also a call by SEIU for a Strike for Black Lives. The working class must take up the demands of oppressed people from Black Lives Matter to Palestinian liberation. The strike is our most powerful weapon.

We need a Strike for Palestine! People in the United States need to direct our energy toward stopping the government from giving a penny to Israel. We are in the “belly of the beast.” As our Bolivian comrade Violeta Tamayo described the 2020 BLM uprising, “We believe it’s crucial for socialists in the United States to fight to build a truly anti-imperialist organization. For example, the Black Lives Matter movement has been very important in Bolivia for the defeat of the Far Right, because it weakened the interventionist sectors in the United States and weakened the right wing in our country as well. Áñez’s defeat has also been a defeat for Trump, and the MAS’s electoral victory has expressed a relative limit in this geopolitical context to the U.S. government’s interference in Bolivia.”

Let’s bring that same energy for Palestine! The Biden administration has proven it is an enemy to Black people, Palestinians, Colombians, immigrants, and to the working class around the world. The Democrats and Republicans operate in the interest of defending capitalism and imperialism. Their attacks on the working class around the world is bipartisan.

Biden and Kamala Harris both already had a history of supporting Israel and ignoring the country’s human rights violations. Now in office, Biden’s administration has given more weapons to continue massacres of Palestinians by the apartheid state of Israel. This is why the BLM movement must completely break with the Democratic Party and reject the co-optation attempts by corporations. It is a contradiction for the BLM Global Network to create a super PAC to elect Biden and Harris, long time supporters of the apartheid regime, but then to declare “Free Palestine.” Class independence is the only way to advance the struggle against the U.S. police and imperialism, its world police.

The Republicans and Democrats both defend Zionist murder. Even Sanders and The Squad have argued in support of Israel’s right to “defend itself.” Rashida Tlaib, the first Palestinian American elected to Congress, gave an impassioned speech about her family in the occupied territories. However, she did not call for an end to aid or challenge Israel’s “right to defend itself.” The Democratic Party squelches dissent and even the most “progressive” members still defend an exploitative system. This is why the working class and oppressed need to build a revolutionary socialist combat organization. Having a class- independent revolutionary organization would allow the working class to develop an international strategy to oppose and defeat imperialism as well as its proxy, the Zionist apartheid state of Israel.