Out of Control and No End in Sight: Coronavirus Continues to Ravage the U.S. Working Class

The arrival of autumn has brought with it an expected surge of new coronavirus cases, but the massive rise in new infections and hospitalizations far exceeds any anticipated seasonal increase. Getting the virus under control again and protecting working people will require more than just quarantines. 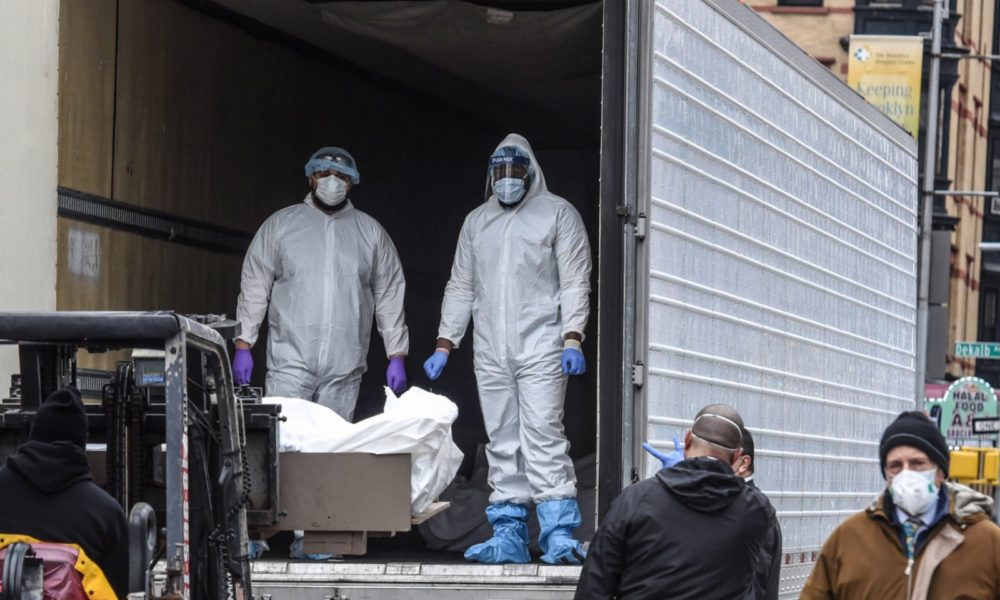 On Friday, more than 181,000 new cases of the coronavirus were reported in the United States. This record-breaking figure is almost five times the number of new cases reported at the height of the initial outbreak in April, when more than 2,000 people were dying almost every day, and it is more than double the highest daily number before the latest surge began in early October. The number of new deaths has also steadily increased over the last several weeks from less than 800 a day nationwide to almost 1,400 reported on Friday. Perhaps worst of all, the number of current hospitalizations has skyrocketed since October to 68,000, far greater than at any time since the pandemic began, suggesting that an even greater spike in new deaths and potentially crippling health complications is on the horizon.

While the colder weather has surely played a role in the increase in new cases — as many health experts predicted it would — the current catastrophe unfolding in the United States is fundamentally a failure of politics driven by an economic imperative that has put profit and the so-called health of the economy above the physical health and well-being of the most vulnerable people in the country: namely the elderly and working class people, especially people of color, who have been left behind and sacrificed on the front lines of production and distribution since the pandemic began. Although some states, including New York, New Jersey, California, and Connecticut acted quickly after the initial outbreak to significantly reduce the daily number of new cases, throughout much of the rest of the country it was business as usual. Fed by a near non-stop stream of false information and obfuscation coming out of the White House, many state governors refused calls by experts to shut down schools, colleges, restaurants, and non-essential services or to pass mandates requiring the use of masks in public spaces.

As a consequence, rapid spread of the virus continued across much of the country, growing during the summer months and increasing rapidly as the weather began to cool, and as non-essential businesses began to open and people were forced back to work. This false information also fueled protests against closings, which proliferated in many of the states where the spread of new cases and hospitalizations is now out of control. In North Dakota, for instance, where the governor refused to issue a lockdown, and where the Sturgis Motorcycle Rally (which brought hundreds of thousands of people to the state from all over the country) was allowed to proceed without any mask mandate, one out of every 82 people in the state tested positive for the virus just last week. That is by far the highest rate of any state in the country. Meanwhile, across the midwest, in many states such as Wisconsin, where restrictions have been lax and where state courts have shut down attempts to limit indoor occupancy in restaurants and bars, hospitals are already reporting that they are beyond their maximum capacity and ability to treat Covid-19 patients, and numbers there are still on the rise.

However, even those states that instituted early lockdowns seem to have eased restrictions much too soon and for too long, largely in order to boost the economy and get back to “normal.”

After several months of manageably low numbers, new cases in states across the Northeast are on the rise again. In New York State, for instance, new cases have gone up more than 500 percent since late September, from around 1,000 new cases a day to more than 5,000 on Saturday. During this same period, New Jersey has seen an almost 700 percent increase from around 500 a day to more than 3,500 and Connecticut has gone from less than 200 cases a day to almost 3,000. Although New Jersey Governor Phil Murphy has passed further restrictions on indoor dining and New York Governor Andrew Cuomo has restricted the hours of bars and gyms, such measures are insufficient to stop the spread when cases are increasing so quickly.

Stopping the virus or even getting it under control again is still possible, but, without federal relief it will be costly for states and for working people, and so far the money has not been there for even the most critical aspects of combating the virus. One example is the lack of sufficient funding for contact tracers. As the New York Times explained in October, contact tracing, which is one of the most important ways to keep the spread of the virus from getting out of control, has not been able to keep up with the number of new cases being reported. Though there are many reasons for this, the most important is the fact that the total number of contact tracers in the country is only about a third of the 100,000 recommended by the Centers for Disease Control. This has been further complicated by the lack of tests sites and a limited availability of rapid tests in many states. Training and paying contact tracers and producing and distributing millions of rapid tests costs a lot of money, far more than what has been provided for the task.

Now that contact tracing has largely failed and with a vaccine still several months away at best, it seems increasingly likely that many cities and states will be forced to once again institute quarantine measures, closings, and lockdowns to try to get the virus back under control. As we saw in March and April the economic costs of such measures can be significant, and would hit the working class particularly hard. Not only will many working people lose income, and maybe lose their jobs if businesses go under again, the loss of tax revenue caused by such shutdowns has already led to severe cuts to basic services such as education, transportation, and health that working people rely upon now more than ever. In other words, it is the working class, as always, who are being asked to shoulder the burden of paying for this virus, despite the billions in profits being raked in by companies like Amazon, Microsoft, Visa, and Zoom.

Without some kind of massive intervention and a robust relief package to allow businesses to temporarily close without job losses and loss of income, there is no way we will get this virus under control until a vaccine is in wide use. Such a vaccine is still months away, and even once it is available, it’s clear that it will not become widely distributed for some time and that the communities who need it the most will be the last to get it. Simply waiting around for the vaccine will mean hundreds of thousands of more deaths and debilitating health complications across the country if nothing else is done to protect working people in the meantime. As the end of the year approaches many of the provisions of the first relief package, including the postponement of student loan payments and enhanced unemployment benefits that working families have been relying on for months will expire.

But another relief package like the last one is completely insufficient. Working people, including unions and precarious workers, must demand an emergency program that makes the capitalists pay for the crisis and allows working people to be economically sound without sacrificing their health. This includes free medical care, paid family leave for those who must stay home with children or other loved ones when schools and care facilities are closed, universal sick leave, an indefinite moratorium on rents, housing for the homeless, and guaranteed wages and employment for all employees during lockdowns.

Winning such a program requires more than just voting, however; it requires the direct action and organization of the working class both in their workplaces and in the streets. As factory and healthcare workers showed at the beginning of the pandemic, they are the one who have the power to force employers and the state to shut down dangerous workplaces and to provide adequate safety precautions for all workers. By uniting working people and unions across various sectors, from health care to education, logistics, and production in working class methods of struggle such as strikes and mass demonstrations, we can build now the kind of power needed to win these demands and much more.

The response of the ruling class to the pandemic has once again made naked the cruel logic of capitalism, in which working people and their families are continually asked to sacrifice their physical, mental, and economic health to the production of profit for a few. Meanwhile that same system of profit, through the destruction of natural habitats and industrial farming, is proliferating diseases like the Coronavirus, which are devastating working class communities. In this sense, it is not mere rhetoric to say that capitalism is the disease and socialism is the cure — it is an undeniable fact.