Out with Bolsonaro, the Military, and the Coup Plotters!

President Bolsonaro of Brazil, one of Trump’s strongest allies in Latin America, is on the chopping block. He bungled the response to the coronavirus crisis so thoroughly that even much of his base has turned against him. Now, a wide spectrum of Brazilian society, from the capitalists to mass media to the far left, want him to step down. But, Vice President Hamilton Mourão is no better. 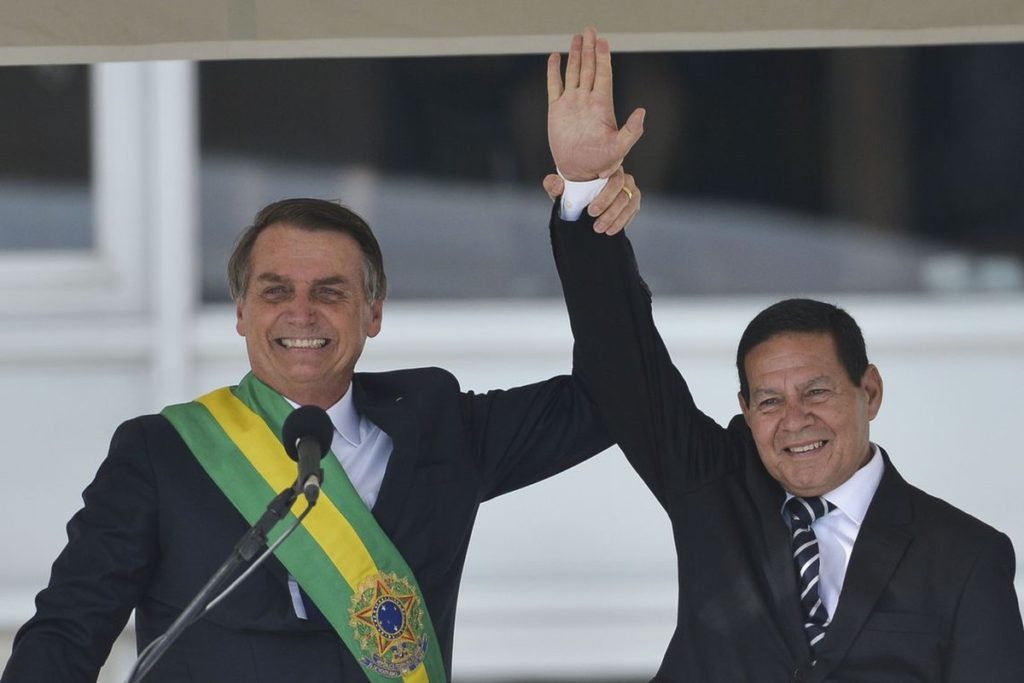 This is a critique of a joint statement put forward by the PT (Partido dos Trabalhadores), PDT (Partido Democrático Trabalhista), and PSOL (Partido Socialismo e Liberdade), written by the MRT (Movimento Revolucionário de Trabalhadores), the Brazilian section of the Trotskyist Fraction.

On March 30, most of the left and center-left parties of Brazil issued a statement calling for President Jair Bolsonaro to resign in the midst of the Coronavirus crisis, citing his poor, almost criminal management of it. The manifesto was signed by the former presidential candidates Fernando Haddad (PT – Partido dos Trabalhadores ), Ciro Gomes (PDT – Partido Democrático Trabalhista), and Guilherme Boulos (PSOL – Partido Socialismo e Liberdade), among other important political figures and political parties from Brazil.

The statement not only calls for the resignation of Bolsonaro — which in effect is a call for former general Mourão to become president and consolidate military authoritarianism in the country (Bonapartism) — it also presents some “programmatic points” that could be wielded by a reactionary military government. It is a nefarious statement that in fact proposes the country be led by the military coup plotters. The statement further generates illusions that these parties could adopt the more “progressive” measures of Mourão.

This path should be absolutely rejected by the left, but it has been shamefully endorsed by former presidential candidate Boulos of PSOL and other important figures of the Brazilian left.

This constitutes an abandonment of not only the most elementary democratic principles but also of the fundamentals of class independence. This is a vital principle — one that these parties have never appreciated. The statement is a political proposal that puts the fate of the health, economic, political, and social crisis in Brazil in the hands of our executioners, the military coup plotters.

Bolsonaro and the military fear a popular uprising and are already preparing to confront it. It is clear that we will have to advance against this type of “opposition” in order to present a way out of the crisis in Brazil.

Funneling the Anti-Bolsonaro Sentiment onto the Worst Possible Path

The mass discontent with Bolsonaro has grown in the middle of the health crisis. This is not only a legitimate but the correct reaction to the absurdity of the government’s policies in the face of the pandemic. It is rage directed against a government that despises human lives.

This extremely progressive sentiment is one of the bases for the revolutionary way out of the enormous ongoing crisis in Brazil. This is a health, economic, political, and social crisis, and it is generating a popular uprising, as analysts and even Bolsonaro himself predict with alarm.

This feeling, if channeled behind such leaderships and the “Frente Ampla” (Broad Front) in formation, will lead the masses to the abyss — a country directly governed by the murderous military.

The left parties that co-signed this manifesto are building a front with bourgeois parties. They have broken with any prospect of class independence. We cannot consider this “front” to be a “democratic” one. Let’s face it, one cannot speak of “democracy” and defend a possible government of Mourão and the military. Coming from bourgeois “nationalists” like former presidential candidate Ciro Gomes or from class conciliation parties such as Lula’s PT, this maneuver is not surprising, although no less despicable. Those who denounced the institutional coup in Brazil that ousted democratically elected PT’s Dilma Rousseff, and those who denounced Mourão’s participation in the government as a representative of the military, now call on Mourão to lead the country. But the worst part of it is that the sectors of the left like the PSOL and PCB (Partido Comunista Brasileiro) signed on. The policy proposed in the manifesto is a “call for Bolsonaro to resign,” but can this really be called an “opposition”?

The concrete policy that this manifesto proposes would result in former general Mourão as president and a very profound strengthening of the country’s military. This response to Bolsonarism is a defense of a “union” with reactionary actors of bourgeois institutions. One should remember that the military has already been playing the role of “mediators” between Bolsonaro and the Congress. Simply, this policy points a way out of the crisis by making a president of a man who only last week had the audacity to openly defend the bloody Brazilian military dictatorship and its atrocities.

To quote an excerpt from the manifesto: “Faced with a government that irresponsibly bets on social, economic and political chaos, it is the obligation of the National Congress to legislate in the crisis, to protect the people and the country from the pandemic. It is the duty of governors and mayors to take care of public health, acting in a coordinated manner, as many have done laudably. It is also the obligation of the Public Prosecutor’s Office and the Judiciary to promptly stop the criminal initiatives of an Executive that violates constitutional guarantees to human life. It is the duty of all to act with responsibility and patriotism.”

They deliberately put all the forces to fight Bolsonaro in the hands of Congress, the stage of the neoliberal reforms, and the Judiciary, the central actor in the 2016 institutional coup that paved the way for Bolsonaro’s presidency.

Lula himself, in a recent video, relies on Congress to “confront” Bolsonaro. However, this Congress is composed of some of the most reactionary political sectors and represents the interests of the country’s main capitalists. Furthermore, in Facebook live, and in Twitter posts, Lula states that “We have to recognize that those who are doing the most serious work in this crisis are the governors and mayors,” justifying the actions of none other than the reactionary João Doria in São Paulo. It is with these figures that the PT and the left want to channel the growing anger at Bolsonarism.

This manifesto also praises the actions of the governors, who are implementing a policy that is totally contrary to minimizing deaths and the impacts of the ongoing health and economic crisis. The governors do not offer massive tests in the different states, nor beds and basic equipment for those who have to keep working. They do not hire more healthcare professionals, they do not guarantee jobs nor salaries, they are risking the health and lives of millions of workers and their families.

How Far is the Self-Proclaimed “Socialist” Left Willing to Go?

The political program of the manifesto does not present an alternative way out other than to strengthen the bourgeois actors of the regime. Bolsonaro is not the only one who aims to make the workers and the poor pay for this crisis with their lives. From one “lesser evil” to another “lesser evil,” we are reaching the edge of the abyss.

This policy of seeking permanent agreements with these parties of “opposition” to Bolsonaro, to the detriment of building with a perspective of workers’ unity, is something that the majority of the PSOL has been insisting on for a long time.

This cannot be the path that the left proposes to the working class, to the youth who risk their lives in ultra precarious jobs, and to the poor masses. This path points to bourgeois actors as heroes, the same forces willing to save markets by risking lives.

For a Policy Independent of the Military and Coup Plotters

We, from the MRT and Esquerda Diario, say “Out with Bolsonaro, the military, and the coup plotters.” The battle for an independent response must involve confronting all three sectors and stand in frank opposition to the whole regime. We must oppose them with a program that puts forward the demands of the working class in the wake of the health and the economic crisis.

Brazil needs an emergency organization made up of health workers, health specialists, unions, and other workers’ and popular organizations; this is the only way to organize a class response to the current crisis. One of the central tasks of this emergency grouping would be to convene and organize a free and sovereign constituent assembly, which would concentrate all the legislative, executive, and judicial powers into one body, and where the structure of society could be democratically decided. This assembly would thus respond not only to the immediate need to  guarantee jobs and lives, but would attack all the structural barriers that condemn the immense majority of people to a life of misery. As we struggle for this program, we advocate for the development of the broadest bodies of self-organisation which are the only guarantee of a democratic way out of this crisis. At the same time, these bodies are the basis for a transition towards a workers’ government that breaks with capitalism.

A policy such as this is the only way out that is capable of preparing us for the prospect of a popular uprising against the crisis of this decadent system.

First published in Portuguese on April 2 on Esquerda Diário.