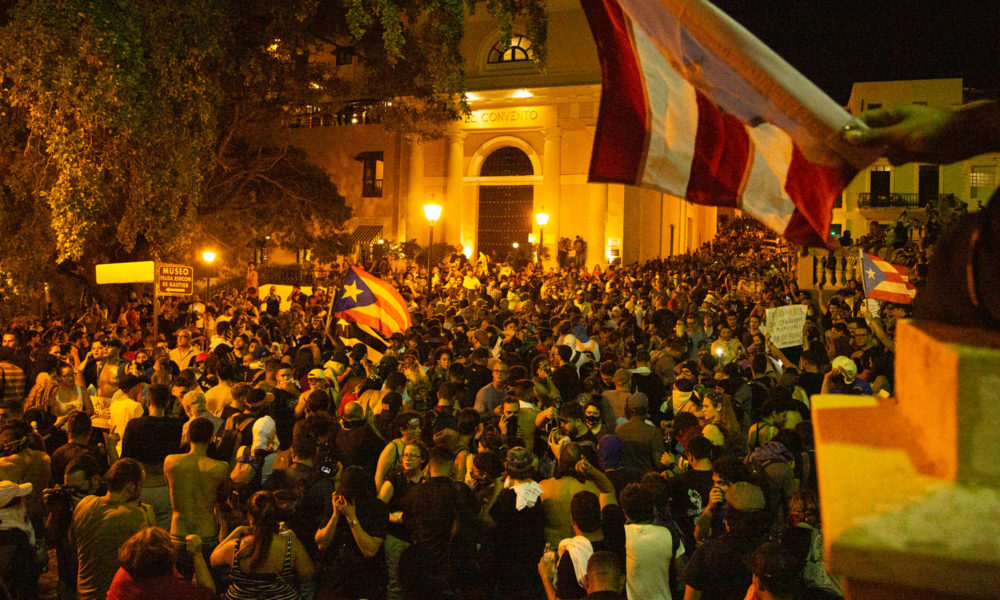 The protests began after a conversation—held on the Telegram app—was leaked to the public; in it, Rossello and other members of the government made homophobic and misogynistic comments.

Slogans such as, “We are many more, and we are not afraid!” and “Ricky resigned, you have to go!” were heard during the past three days in the streets of San Juan.

On Monday afternoon, the police attacked the demonstrators with tear gas to disperse them, but they found significant resistance in the form of hundreds of protesters.

Before the Telegram conversation was made public, the government was already facing a corruption scandal affecting high officials with close connections to the Governor. One day before the mobilizations began, the Secretary of Education and other officials were arrested for embezzlement of state funds. The officials have been accused of making illegal bids with government funds.

The cases of corruption and the president’s misogyny and homophobia have ignited a spark in Puerto Rico. The workers, the middle class and the poor are suffering the consequences of 13 years of economic recession, a chronic debt crisis and the devastating consequences of Hurricane Maria—which Trump refused to help mitigate, despite the fact that the island is a U.S. territory—and these demonstrations are an expression of their anger.

Over 44 percent of the population of Puerto Rico, more than that of any U.S. state, lives in poverty, and 4 percent of the entire population left the island in the year after the hurricane and did not return. According to a 2018 Washington Post report, the cuts forced by congressional refusal to send aid resulted in such terrible cuts to health services that HIV patients were forced to sit in soiled diapers because there isn’t money to replace them. Because Congress underfunds Puerto Rico’s food stamp program and “gives food-stamp benefits about 40 percent smaller than those of states,” and Trump said any additional aid would be “excessive and unnecessary.”

Not only did Trump refuse to supply Puerto Rico with the help it needs, but Congress actually slowed the delivery of food and resources 18 months after Hurricane Maria.

The colonial character of the U.S. relationship with Puerto Rico has been laid bare in the face of the terrible situation facing the island. Puerto Ricans are second-class citizens in the U.S. empire, have no political representation in Congress and do not receive a budget from the federal government anywhere near the standards of the rest of the nation.

When the people of Puerto Rico decide to challenge their government and that of the United States, it is urgent that we support them in full solidarity.