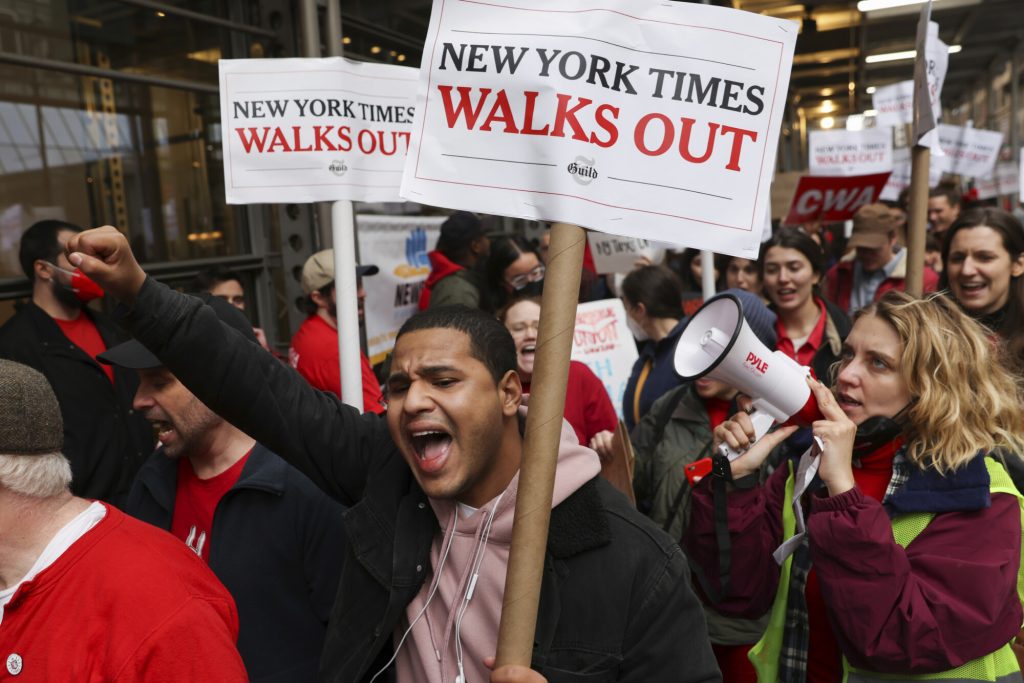 New York Times employees walked off the job on December 8, beginning a 24-hour work stoppage to demand higher wages, better healthcare and pensions, and non-discriminatory performance assessments to replace the current system, which workers say has resulted in harsher critique of workers of color compared to their white coworkers.

Hundreds of workers and supporters gathered in front of the New York Times building in the heart of NYC on Thursday to show the bosses that the workers are the ones who run one of the largest publications in the world, from writing, editing, and fact-checking stories to printing the newspaper and maintaining the building.

A common chant on the picket line was “We make the paper, we make the profits.”

Workers are fed up with the value of their labor being ignored.

While the New York Times rakes in over $320 million in profits, they have refused to meet their workers at the bargaining table with reasonable offers. After 20 months of negotiations, the Times is offering a measly 3% raise to workers. The bosses have also shot down the workers’ demand for a $65,000 salary minimum.

All the while, the New York Times has funneled $150 million into the pockets of its shareholders.

New York Times workers are not alone in their fight. This work stoppage coincides with the ongoing strike of adjunct faculty at The New School, as well as the strike at HarperCollins Publishing, whose union members showed up in massive numbers to stand in solidarity with workers at the Times. New York Times workers fighting for their contract were also joined by coworkers whose bargaining unit isn’t on strike. Workers in the New York Times Tech Guild, for example, staged a lunchtime walk out in solidarity with their coworkers. But expanding the strike may be the only way to ensure the bosses meet workers’ demands.

When asked why she chose to strike in solidarity with fellow workers when her own bargaining unit is not affected, one engineer in the tech department told Left Voice, “They deserve fair wages. They deserve fair healthcare….We see our own future in this. We’re bargaining our own contract right now and it’s vital that [the New York Times] pick up the pace and do what’s right.”

One worker on strike shared this message about the power of worker solidarity:

“It frankly feels fantastic. I haven’t really done this kind of union work before, and it’s taught me so much about what it is and how important it is. I’ve met other colleagues today from other Writer’s Guilds and it’s just been wonderful.”

This 24-hour walkout was the biggest labor action taken by New York Times employees in over forty years. Even just one day on strike costs the New York Times and its wealthy shareholders millions of dollars. To win all of their demands, workers will need to be prepared to take further action and expand their strike, showing the bosses that they are the ones who hold the power. One thing is certain: whatever step the workers at the New York Times take next, all eyes will be on their struggle and they will have the support of hundreds of people across the city and the support of other workers fighting in their unions for similar demands.