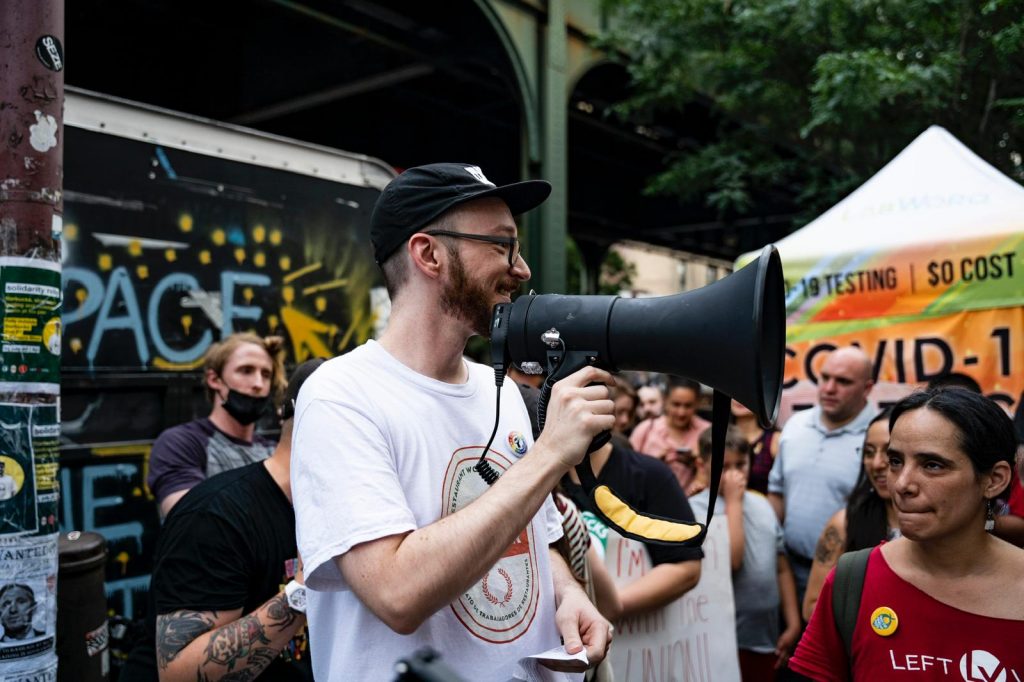 Over 150 people joined a rally in solidarity with Austin, a Starbucks worker who was illegally fired five days after his Starbucks store in Astoria, Queens won its union election. Austin Locke worked at Starbucks for 6 years prior to his firing on July 5. He was publicly active in helping to unionize his store with Starbucks Workers United (SWU) and is also a member of Restaurant Workers Union (RWU). In retaliation against his organizing efforts, Austin was targeted by Starbucks management and was fired.

Starbucks workers who spoke at the rally shared that Austin’s experience is a reality for unionizing Starbucks workers across the country. Howard Schultz, the CEO of Starbucks, has been ramping up union busting, including harassing pro-union workers, firing worker-organizers, proposing new benefits for non-union stores, and even closing unionized stores. Starbucks workers have been responding to these attacks with strikes, protests, and walkouts.

These ongoing union-busting tactics and attacks are also a reality across many corporations in New York City like Amazon, Chipotle, HarperCollins, Apple, the Guttmacher Institute, and others. To reflect this situation, Friday’s rally was open to other sectors that are in struggle, such as Amazon, UPS, and the Guttmacher Institute, and also to leftist organizations who were part of the call for this rally like Restaurant Workers Union, Left Voice, Socialist Alternative and DSA. The rally was attended by community members, other unions and their members, and leftist organizations, all in solidarity with Austin.

Friday showed the need and the potential of a united struggle against union busting in NYC. Workers are stepping up for their rights but the attacks from the bosses are serious. We need to coordinate our fights to show that in NYC, we won’t let these attacks happen without a fight.

As Austin said during his speech, “the reality of the situation is that an injury to one of us is an injury to all. They came for me and they can come for you next, but not when we are unified and fight back. I’m not the first, I’m probably not the last, but let’s make NYC an example for Starbucks, for the capitalist class everywhere: you come for one worker, you come for us all.”