Over 1,600 Attend Talks by Socialist Feminist Andrea D’Atri across Europe

Andrea D’Atri, a feminist and socialist from Argentina, the founder of the women’s organization “Pan y Rosas”, has been touring Europe for three weeks. Meetings in Rome, Munich, Madrid, Barcelona, Bordeaux, Toulouse and Paris attracted over 1,600 people. This Saturday, she concluded her tour with a meeting in Berlin. 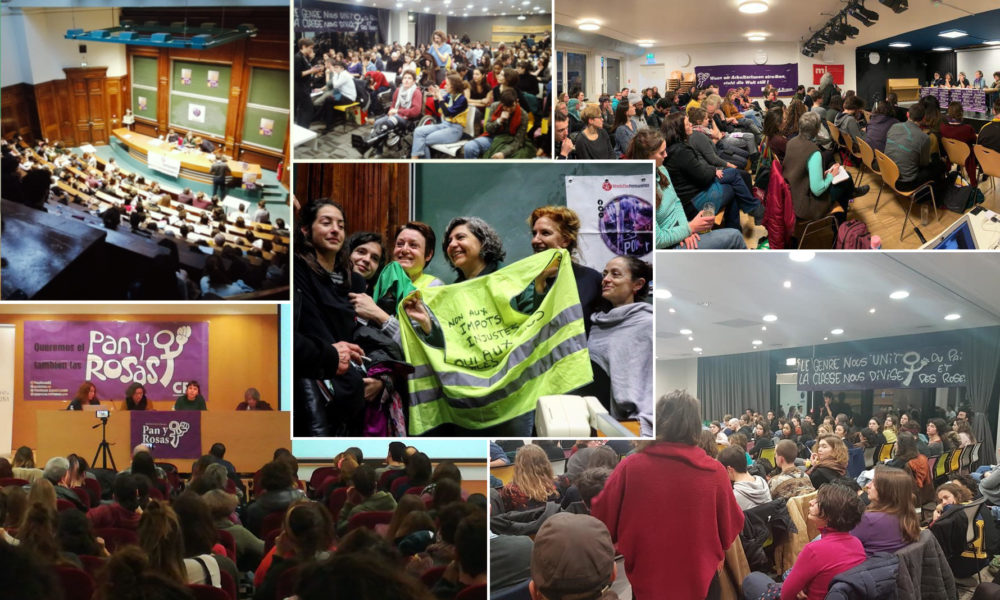 One hundred and twenty people came to hear her speak in Munich. More than 400 people took part in lectures in Madrid and Barcelona. In France, where the class struggle has been intensified by the Yellow Vests’ movement, the halls in Bordeaux, Toulouse and Paris were bursting at the seems, with over 200 people attending each talk. D’Atri concluded her European tour with a book presentation in Berlin on Saturday.

Her book “Pan y Rosas” (“Bread and Roses”) about gender and class in capitalism was published in Argentina in 2004. In the last 15 years there have been editions in Spanish, Portuguese, Italian, and most recently in German and French.

Women have been at the forefront of fights against right-wing governments, from the Women’s March against Trump in the US to the #EleNao movement against Bolsonaro in Brazil.

The huge turnout at these events in Europe is an expression of the growing women’s movement around the world. A new generation of activists throughout Europe wants to learn from the #niunamenos movement in Argentina against sexist violence, as well as from the fight for legal, safe and free abortions which brought millions of people into the streets last year.

At the same time, there is a strong push to rebuild the link between the women’s movement and the workers’ movement, which have been separated for decades. This is most clearly expressed by the International Women’s Strike which is now being organized for the third time.

D’Atri, as the founder of the international women’s organization “Pan y Rosas”, stands for a feminism that fights for the hegemony of the working class in all struggles against oppression. “Pan y Rosas” has fought to build up women’s commissions in workplaces across the country. The organization is linked to the Party of Socialist Workers’ (PTS), of which D’Atri is also a leading member, and works to build a revolutionary socialist party that can bury patriarchal capitalism once and for all.

A highlight of the tour was in Bordeaux, where hundreds discussed the connection between the Yellow Vests movement and the women’s movement. D’Atri and activists from Bordeaux exchanged a green scarf — a symbol of the movement for abortion rights in Argentina — and a yellow vest.

In Barcelona, the meeting was attended by low-wage hotel cleaners, organized in the campaign “Las Kellys”, as well as workers from the telephone company Movistar. Rita, an immigrant domestic labourer, said: “They want us triply oppressed. But we are triply combative: anti-racist, anti-capitalist and anti-imperialist.”

In every city there were debates about the strategy that is needed to defeat patriarchy and capitalism. In Madrid D’Atri asked, “Are we fighting for more female bosses, or are we fighting to end capitalist exploitation?” In Barcelona, she proposed to look at the international women’s movement in the context of the crisis of capitalist hegemony. She said: “The conditions for linking the women’s movement and the class struggle are better than ever.”

She also stressed the need for political independence of the working class from all wings of the bourgeoisie. She criticized sectors of the radical left who “don’t see the need to unite the feminist movement with the power of the working class to carry out revolutionary change.” She quoted the American socialist Louise Kneeland:

And D’Atri expressed in Bordeaux, a society “liberated from all forms of exploitation and oppression is not just a wish, but rather an urgent necessity to make life worth living for the vast majority of humanity.”

On Saturday, D’Atri concluded her tour with a meeting in Berlin. Her book has just been published in German for the first time.