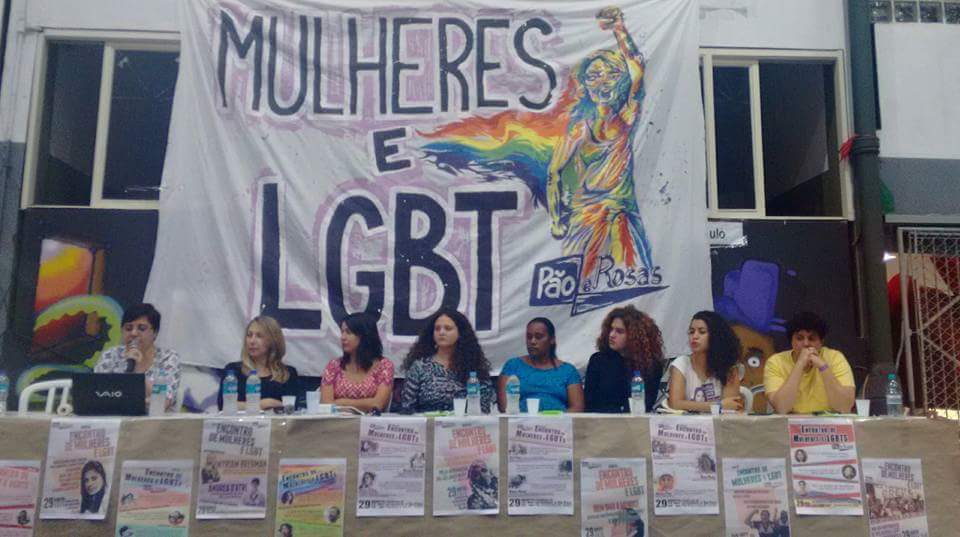 The conference took place at a politically and economically volatile moment at which the government is aligned with the political right in defending austerity plans that force workers to pay for the financial crisis. It is also a moment at which opposition to the Workers’ Party (PT) is gaining political strength. The most powerful opposition is led by religious fundamentalists like Eduardo Cunha of the PMDB . However, women and LGBT people cannot look to the PT government to defend our rights as women, as LGBT people, or even as workers, as they are implementing austerity measures that affect workers, they refuse to advance legislation defending a woman’s right to an abortion, they have vetoed anti-homophobia education in schools, and more.

The Pao e Rosas conference was proposed to foster discussion around the position of women and LGBT people in the current crisis, and to conceive a movement independent of the Right and the government to respond to the crisis and the daily attacks to our lives. Attendees also how to advance campaigns for specific laws, such as a law that would legalize abortion and a law affirming the gender identities of trans people (the Joao Nery law). In this spirit, we debated the proposal of the Revolutionary Workers Movement (MRT) entry into the Party of Socialism and Liberty (PSOL) in order to build an option to the Left that is real and visible to workers . 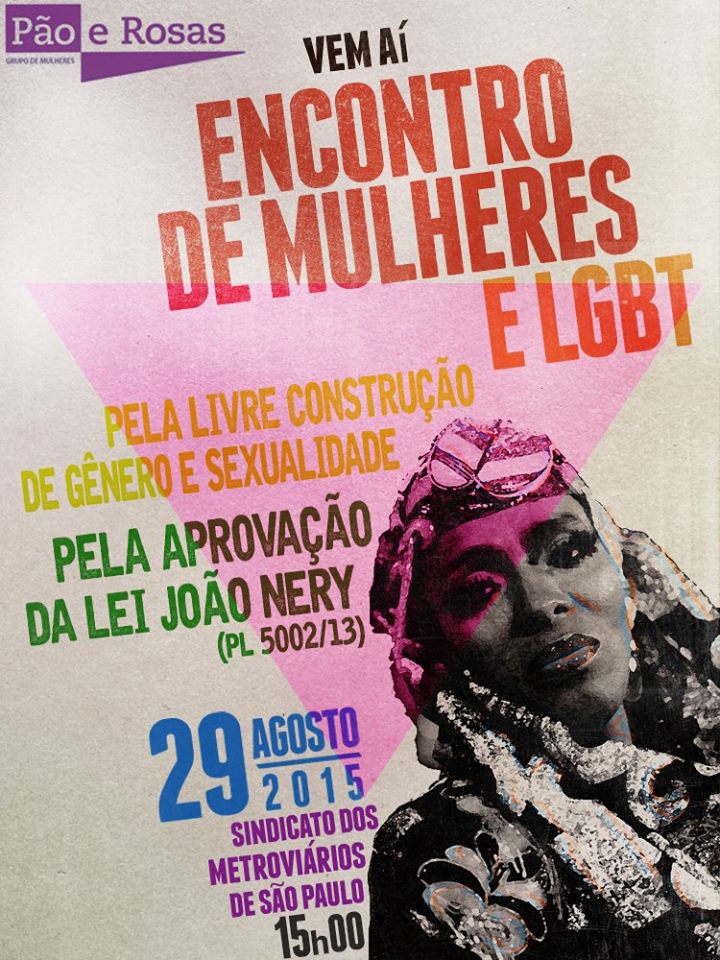 Who is Pao e Rosas

Pao e Rosas is an international Trotskyist women’s group led by the female militants of the Trotskyist Fraction—the Brazilian party under this banner is the Revolutionary Workers Movement (MRT), and the Argentine counterpart is the Socialist Workers Party (PTS). It includes trans women and cis women, workers, students, young women and old women, housewives, college students, and high school students. Together, these women attend and plan protests and discuss readings. The group is neither solely activist, nor solely academic, and is focused on Trotskyist theory and putting that theory in practice.

The MRT voted to organize this conference at its annual Congress held in July. Afterwards, conversations were organized at workplaces and universities in order to prepare for it. In Marilia, a city in the state of Sao Paulo, a study group called “Relationships and Class Struggle: Revolution in the streets, in our homes and in our beds” read and discussed Bolshevik revolutionary Alexandra Kollontai’s book, The New Woman and Sexual Morality. Sao Paulo metro workers continued their study of American scholar Wendy Goldman’s Women, State and Revolution. Campinas was a locus of conversations around transphobia. The build-up to the conference was meant to prepare people not only to participate in the conference, but to make connections that would continue after the conference was over.

The conference began with short speeches from various groups, including a letter written by the Presidential candidate for the PSOL. As the conference took place on the Day of Lesbian Visibility, Marie Castañeda, the coordinator of the Student Government of Social Sciences at the University of Campinas talked about the struggles that lesbians face in the workplace, at doctors’ offices, and in the streets.

The main panel was composed of a wide array of women with vastly different life experiences, from teachers to health workers to subcontracted workers and even the Argentine vice presidential candidate Myriam Bregman. Silvana Araújo, a subcontracted Black woman who works at the University of Sao Paulo, talked about the importance of each woman fighting against her boss and the struggles and violence that Black women face. Carolina CaCau, a coordinator of the Student Council for Social Work at the University of Rio de Janeiro, talked about the ongoing strikes and protests by university students in Rio, as well as in the rest of Brazil, and about the need to organize and mold these students into revolutionaries. Rafa Poli, a teacher from Parana, spoke about the strength of the teachers’ strike, which reverberated throughout the country when the police threw tear gas and rubber bullets, injuring many teachers.

Afterwards, Andrea D’Atri, the founder of Bread and Roses (Pan y Rosas) in Argentina and the candidate to Congress in the Parlasul (parliamentary institution of the Mercosur trade bloc) for the Left and Workers Front (FIT) spoke about a Marxist and revolutionary vision of women’s struggle. Next, Myriam Bregman, who is a human rights lawyer in addition to a vice presidential candidate, spoke about the ways that the PTS, or the Party of Socialist Workers, is working to reach more and more women and workers with its program of class independence. She was particularly applauded when she spoke about inverting the mandatory gender quota with a candidate list of 70% women when the minimum was 30%. Lastly, Diana Assunção, the founder of the Brazilian chapter of Pao e Rosas, talked about the importance of finding a revolutionary alternative for LGBT people and women in Brazil, focusing her discussion on the prospect of the MRT entering the PSOL. She said: “We have debated with most of the comrades here about having a revolutionary perspective of class independence. At the same time, we have the experience of the FIT in Argentina that shows us a way to think about alternatives in the face of the PT crisis: with a politics of class independence,” as Myriam and Andrea highlighted, “we believe this should be the path taken in Brazil.” 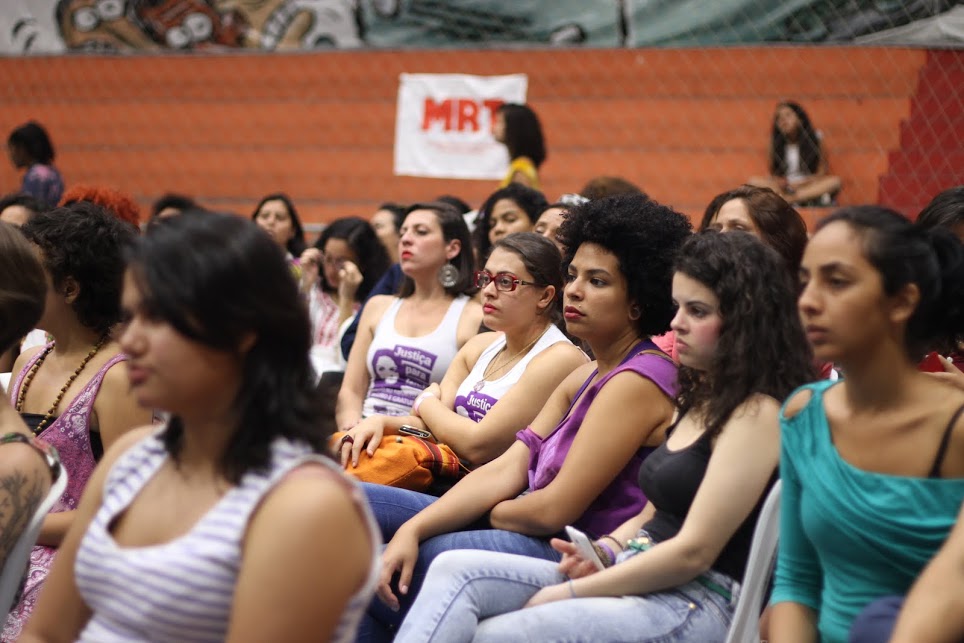 Afterwards, there were discussion groups in which there was intense debate and exchange of ideas between various different kinds of workers and students from many different cities in Brazil.

Attendees approved several campaigns, including Pao e Rosas’ participation in a protest against the government and right-wing sectors and a protest for the re-hiring of worker Andréia Pires who was fired from JBS. Participants also took a photo supporting MRT’s entry into PSOL. Lastly, participants made a video for Giselle, a young Brazilian woman who had had her hands cut off by her abusive ex boyfriend a week earlier, telling her she is not alone and that “if you mess with one of us, you mess with all of us” .
Conference-goers also began a financial campaign to gather funds for her for her to buy prostheses.

The conference served its purpose of uniting women with the will to fight. Fran, a teacher from the State of Mina Gerais, spoke for many when she said, “It is hard to describe all the emotions that I felt during the conference for women and LGBT people. Many times complete fury and anger took hold of me in the light of the situations…lived by my comrades in the sexist, racist and LGBTphobic society. But the fury turns itself in a explosion of energy and will to fight.”