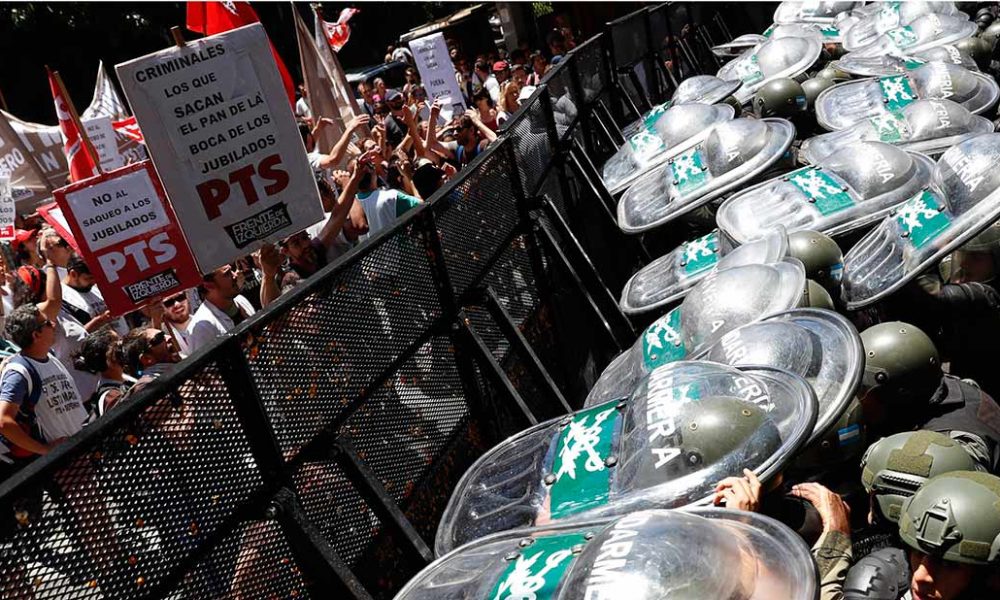 The October 22 midterm elections saw a reassertion of the ruling coalition Cambiemos (“Let’s Change”), which obtained 42 percent of the popular vote at the national level. Peronism, in all its variants, received an unambiguous blow throughout the country. Most importantly, former president Cristina Fernández de Kirchner (CFK), running as candidate for senator for the province of Buenos Aires, came in second after Cambiemos’ candidate Esteban Bulrich. The lackluster performance demolished CFK’s aspirations to unite Peronism behind her leadership.

With the ostensible legitimation of his mandate, and the main force in the opposition in shambles, Mauricio Macri felt he had green light to go forward with all “necessary” reforms. From his point of view, the same point of view of capital, Argentina needs a reduction in labor costs to recover ‘competitiveness’. This was one of the directions graciously recommended by the International Monetary Fund during its last visit to Argentina, a week after the elections. We know how the story goes. Cheaper products sell better in the global market, so workers need to tighten their belts and lower their expectations: that’s the only way to save the economy.

The labor reform, was poised to spark the hefty opposition from the more militant unions. Additionally, a wing within the thoroughly bureaucratic CGT (General Labor Federation) withdrew its support. The bill was tabled until next year.

A Pillage on Retirees and the Poor

Another item in IMF’s recipe, which Macri’s government will follow to the letter, was a reduction in government spending on social security. The constituencies affected by a slash on social security do not necessarily have the same mobilization capacity that organized labor can boast. The strategy was, thus, to attack the weaker.

If passed, the pension reform will affect 17 million retirees and beneficiaries of the welfare program Asignación Universal por Hijo (AUH), a conditional cash transfer for poor families with children. The proposed bill would put in place a new method to adjust pensions to inflation, substantially reducing the final income. With the new formula, the 2017 bi-annual increase would be reduced from 12% to 5.7%.

The bill swiftly received the approving stamp in the Senate and moved to the Lower House. Cambiemos ostensibly had the support of Peronists in the House of Deputies to convert it into law. In late November, governors of 23 provinces (all but one) signed an agreement with the federal government that included an increase for provinces in the share of national revenues. In exchange for this favor, governors committed, among other things, to secure the support for the pension reform bill for those representatives who politically respond to their leadership.

However, when the bill was brought to the floor on Thursday, December 14, the support withered drastically. Mass mobilizations outside Congress by unions, students organizations and political forces tarnished the session inside the Parliament. A simmering tension became outright scandal when a heavily militarized gendarmerie repressed the protesters with rubber bullets and tear gas: the Plaza Congreso turned into a battlefield.

The session had to be postponed to early this week, but the damage was done. The government’s popularity began a free fall.

This Monday, December 18 tens of thousands gathered again in the square across from Congress to protest the passing of the bill. Several unions called to mobilize in front of Congress. Even the CGT threatened to call a general strike if the bill were to pass.

Around noon, several thousand people packed Plaza Congreso and overflowed Avenida de Mayo and other streets in contact with the square. The police cracked down on protesters, leaving dozens of injured and over 40 people arrested and detained. Protesters responded hurling stones at the cops–a battle on the streets ensued again.

In the evening, groups of people spontaneously took to the streets throughout the city to express discontent banging pots and pans. These cacerolazos (from “cacerola” = pot), reminiscent of the economic debacle and political crisis of 2001, mushroomed across neighborhoods in several cities. At the moment of writing this lines, thousands of protesters coming from different cacerolazos converged outside Congress. Inside the building, the debate continued with no clear end.

Congressman for the Left and Workers Front (FIT) Nicolas del Caño, denounced the repression on the streets and called the bill a “pillage to the retiree and the poor.” Other congressmen repudiated the repression, but the outcome is still far from certain. Having 108 seats over a total of 257, the ruling Cambiemos depends on the support of a significant number of members from the opposition–overwhelmingly belonging to different wings of Peronism–to pass the bill.

In a most unexpected turn, the attempt to ram the pension reform through Congress sparked a popular backlash that shows Macri’s fragile rule. The specter of December 2001 looms large in the collective consciousness, and the protests are not going anywhere.