People are Dying from Mass Incarceration. Doctors and Community Members are Fighting for Healthcare Access

Within the past year, the Department of Corrections (DOC) and Correctional Health Services (CHS) have overseen 14 reported deaths and ongoing human rights violations in NYC jails. Community members have had enough. They are joining together to demand access to patients to prevent more from dying in DOC and CHS hands. 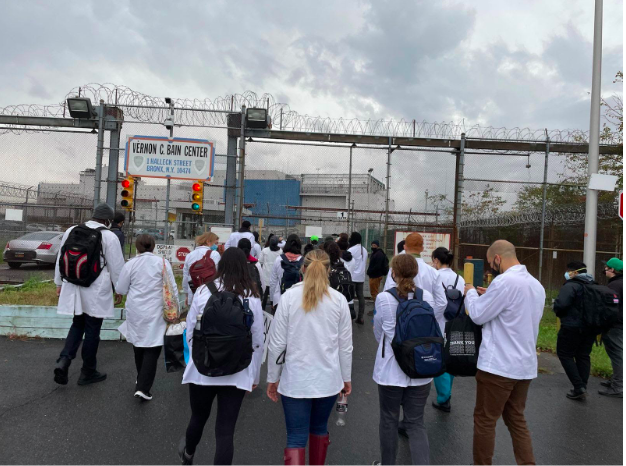 On Saturday, a group of Bronx community members and healthcare workers approached Vernon C. Bain Center (VCBC), commonly referred to as “The Boat,” demanding to see and treat patients inside. This action comes at a time where concern has grown over the conditions inside, with 14 deaths reported in the last year alone.

In addition to demanding contact with incarcerated folks in The Boat for community members, medical workers, and legal observers, activists’ demands include: monthly un-announced access to any jail facilities requested. Activists also raised the slogan “Free them All” and called for abolishing the incarceration system as a whole.

These starkly inhumane conditions are happening under a Democratic mayor and Democratic governor. This shows, once again, that the Democrats, like all capitalist politicians, help to uphold the U.S. mass incarceration system. As NYC Mayor Bill de Blasio leaves office, these actions come as no surprise. After all, this is the same administration that claims to want to shut down Rikers, not by freeing the humans caged there under abysmal conditions, but by opening smaller “designer,” borough based jails throughout the city.

At the end of the day, capitalist politicians have no interest in dismantling the mass incarceration system in the U.S. Politicians give lip service to wanting “reform,” but the U.S. system of mass incarceration cannot be reformed, as it is integral to the functioning of capitalism. The only solution is to destroy this system, as a part of the process of destroying capitalism itself. See below for the press release from healthcare workers and members of the group Eyes on You.

Today at 9:00 a.m. EDT, a group of community members and community-based healthcare providers demanded entry to Vernon C. Bain Center (VCBC, commonly referred to as “The Boat”) in order to assess and treat patients inside. Over the past 10 months, the Department of Corrections (DOC) and Correctional Health Services (CHS) have overseen 14 reported deaths and ongoing human rights violations in NYC jails. Urgent independent intervention is needed to save lives.

The activists, many donning white coats, brought medic bags filled with pens and paper, bandages, and personal protective equipment and carried signs demanding “Let Us In! Let Them Out!” and “Care, not Cages!”

“The ongoing mass murder of Black and Brown people under the supervision of authorities and doctors needs to stop,” said Dr. Mariya M., a family physician and supporter of Eyes on You. “Federal monitor reports, politician visits, and academic research have uncovered torture inside the jails, and yet nothing has changed. How many more have to die before this crisis is addressed?”

News reports have detailed people languishing for weeks or months without life-saving care. Basic needs have been denied to detained individuals, and stories document poor access to food, water, hygiene, and health care as well as increased exposure to interpersonal violence. Twenty months into the COVID-19 pandemic, infections continue to ravage the jail, and persistent infection risk is compounded by overcrowding. CHS leadership has already acknowledged that the agency is incapable of providing care under current conditions. Activists argued that CHS leadership and staff have been complacent in the face of these horrors and that their continued presence in the jails in the face of blatant human rights violations legitimizes and upholds one of the most dangerous jail systems in the entire world.

“Ultimately, jails and prisons are not and can never be places of healing. Health workers are here to demand that these facilities be closed completely, permanently, and responsibly so that collective care can be provided in the communities in which people live and so that we can start meaningfully addressing the harm that incarceration has inflicted,” said Jess Ho, a medical student who participated in the action.

“We are not looking for reforms,” said one of the members of The Eyes on You Committee, “our long term goal is to abolish the system as a whole. In the meantime, we’re looking for people to get released… as many as possible, and for people to be examined by independent doctors.”

This action has been organized by a concerned group of medical providers and Eyes on You, a committee dedicated to the liberation and protection of Black and Brown people through the abolition of white supremacist structures of policing, surveilance, and confinement.