This week the famous soda brand got involved in a social media scandal after their new advertisement was accused of ridiculing protests and trivializing the fight against police brutality. 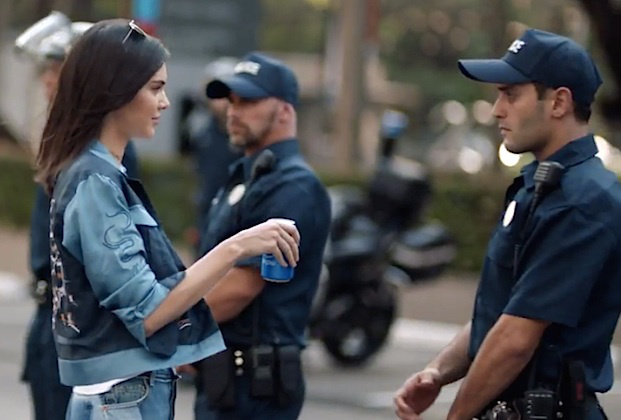 You can watch the Pepsi commercial here.

Pepsi released an advertisement earlier this week starring reality TV star Kendall Jenner, who is depicted leaving a modelling photoshoot to join what a protest populated by a mass of happy multiethnic millennials holding peace and love signs. The march moves forward until it reaches a line of police, but the imminent conflict is resolved peacefully when Jenner hands a can of Pepsi to one of the cops. They exchange smiles him and her fellow protesters cheer wildly.

The company defended the ad initially, but after a few hours of relentless social media critique and ridicule, they pulled the video and published a retraction: “Pepsi was trying to project a global message of unity, peace and understanding. Clearly we missed the mark, and we apologize. We did not intend to make light of any serious issue”.

So far, the internet has responded to the failed commercial with a firestorm of sarcastic tweets and memes, and the ad has even served as fodder for some late-night TV hosts. But the video wasn’t just a public relations faux pas, it was an example of how the market tries to monetize our struggles and empty them of any radical meaning. Here are three examples in this particular advertisement:

The Absurd Feminist
At the beginning of the video, Jenner is posing as a model, until she gets distracted by the sound of the protest. Suddenly inspired by the not-so-political movement, she rips off her blonde wig, wipes off her lipstick and joins in. This sort of metaphor about women struggling for their rights (in the form of personal empowerment) contrasts with the recent experiences of collective fight against patriarchal violence, such as the International Women’s Strike. Instead, Jenner’s superficial rejection of beauty standards looks pretty similar to Melania Trump’s shallow attempt to be a new “women’s rights” icon.

The Speechless Artist
One of the secondary characters in Pepsi’s ad is a woman photographer and hijab wearing Muslim. While working on a project in her studio, she hears the protesters passing by her window and joins the march, just in time to take a picture of Jenner saving the day.

As journalist Tasbeeh Herwees has pointed out, this isn’t the first time token images of Muslim women have been used as a static sign of resistance in art and advertisement, reinforcing a simplistic stereotype that fails to reflect the diversity of lived experiences, politicial opinions and the complex struggles of Muslim-American women.

The Good Cop
Unfortunately, we’ve seen plenty of contemporary advertising showing militarized police in a friendly way. During the last Oscars for example, one of Cadillac’s commercials promoted images of ‘American unity’ including an African-American man hugging a white cop, an image that elicited some criticism at the time. Pepsi’s distasteful ad is yet another thoughtless display that went too far, featuring Kylie Jenner- a widely-known white model and reality star with a marked lack of civic engagement- who miraculously overcomes the tension between demonstrators and police in the futile act of sharing a soda. This picture mocks the struggles of the Black Lives Matter movement against racist brutality and contributes to false images of the police as a possible ally -not as the guarantors of capitalist accumulation, which is their actual role in society. It diminishes the struggle against racist police violence and makes it seem as though racism can be overcome with a simple soda.

Resistance in the Selfie Era
Pepsi failed in its effort to “connect” with a new generation of potential consumers by reducing their dreams and aspirations to a friendly slogan. We must take note on this, as Pepsi isn’t the only one trying to sell a political movement as a product, or in other words, as an individualistic and consumerist solution.

There are new movements taking the streets, fighting patriarchy, racism, and imperialism. As people mobilize and fight back, some might try to channel this energy to individual acts of resistance or to support reformist programs, ironically led by the same people that brought us to the current situation. In order to counter this empty and superficial turn, we socialists must join in the present struggles, and try to turn them into a battle against a system whose twisted logic offers nothing but misery and destruction for most people, even when it’s disguised as an innocent soda advertisement.