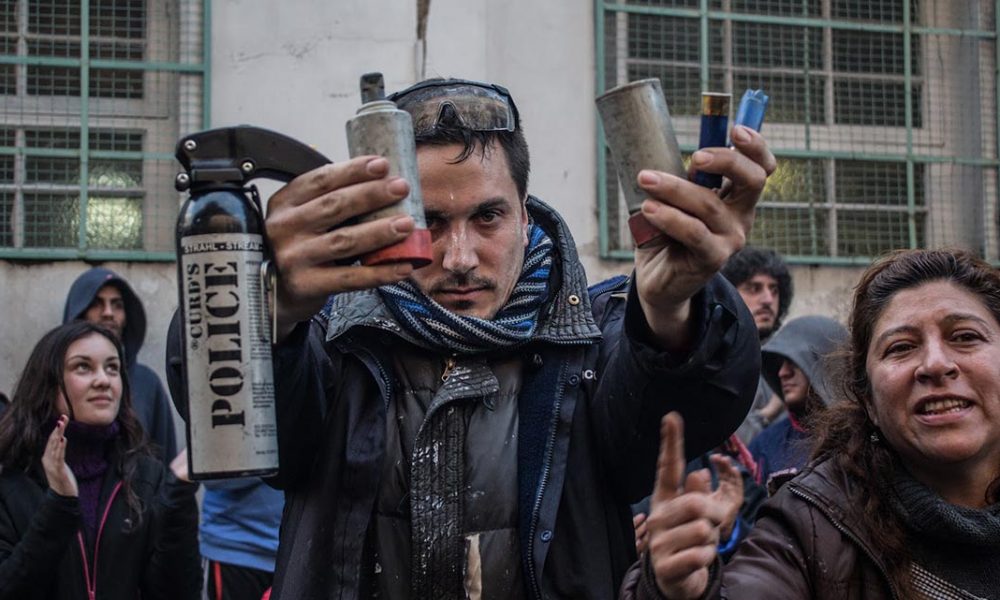 “We resisted until the end and we won’t back down,” said workers’ delegate Luis Medina. The snack factory had been occupied since late June, after it had been closed abruptly by the company to move production elsewhere, leaving over 600 workers out on the street. For the following few days during the occupation, the workers began a steadfast resistance that would include road blockages, marches to the town hall of Vicente López, where the factory is located, nationwide mobilizations and a massive campaign in the media and social networks calling for a boycott of the company’s products, marketed under globally popular brands such as Lay’s, Quaker, Doritos, 7UP, Cheetos, Gatorade and Tropicana.

The fierceness of the repression that took place in the early morning of last Thursday took even some of the most battle-hardened workers’ delegates by surprise. “They broke in smashing glass, doors and windows, with batons and tear gas, threatening us (…) My dad worked at Ford and told me about this, that they made their shop-floor committee disappear [during the dictatorship]. This is what you read in history books. I’m 43 and I had never experienced this, which is happening in a so-called democracy (…) Someone could’ve died here,” said delegate Camilo Mones.

But the workers were not alone. They had the solidarity of the neighborhood’s residents, who came out to beat pots and pans on the street in protest and took injured workers and supporters into their homes to treat their wounds provide shelter from the repression. Also supporting them were hundreds of other workers, students and human rights advocates who had been camping outside for the past few days and had set up road blockages to prevent the police from entering the factory. At about 10:00 a.m., the workers negotiated to walk out freely, with the help of a committee of representatives of human rights organizations and political figures that ensured that they were not harmed in the process.

The images of the repression and the workers’ brave resistance spread through the media in the next few hours and sparked outrage and solidarity among significant sectors of the population who have been hard hit by the sharp rise in unemployment and inflation of the past few years.

The workers had been evicted, but it was clear that the fight was far from over. “They got us out, but our struggle will continue. This doesn’t end here,” said one of workers’ delegates.

Just two hours after the repression on July 13, an order was issued by Division 6 of the National Labor Court of Appeals stating that Pepsico had violated the National Law of Employment by dismissing the workers and ordered their reinstatement. The company will also be fined $5,000 per worker for each day in the event of non-compliance.

“This shows that we were right when we said that what the company was doing was illegal and yesterday’s repression was also illegal. This violence against the workers could have been avoided,” declared Mones.

The National Law of Employment establishes that workers cannot be dismissed prior to the initiation of a Crisis Prevention Procedure, which was only filed by the company days after the plant was closed. Under Section 158 of the Argentine Penal Code, this action constitutes an “offensive lock-out” and is classified as a criminal offense.

Not only did the company fail to correctly follow the legal proceedings required to dismiss the workers, but the Crisis Prevention Procedure itself fraudulent. According to Edgardo Moyano, a lawyer representing the Pepsico workers’ shop-floor committee, “a Crisis Prevention Procedure is a mechanism by which companies must show their accounting records to prove that they have been going through a crisis for the past 3 years and then all possible measures must be taken to avoid the loss of jobs and mitigate the harmful effects of the crisis.” However, the company’s figures for the past year glaringly belie the existence of any such crisis. Pepsico Argentina’s turnover last year was $4.8 billion, an increase of 26.3% compared to 2015, and it was ranked by Revista Mercado as the 217th company with the highest turnover in the country.

Furthermore, under Section 6 of Executive Order 265/02, “In the event of collective workers’ suspensions or dismissals, upon failure by the company to observe the required procedure, the administrative labor authority must order the immediate reversal of such measures, following a hearing with the parties.” However, despite the claim filed by the workers’ shop-floor committee through the Union, the Ministry of Labor failed to comply with this obligation.

“The abrupt closure of the plant was aimed at preventing the workers from organizing, from finding out about the situation, defying the company’s plans and determining the steps to be taken in assemblies. Any ‘negotiation’ under these conditions would be unfavorable for the workers outside of their workplace, which is considered a disloyal practice under the Law on Workers’ Unions,” explained Moyano.

Pepsico’s decision was a clearly discriminatory, anti-union measure against a group of workers who have been waging a resolute struggle to maintain their working conditions in a context of increasing inflation and unemployment. More than 200,000 workers have been laid off in Argentina over the past year and a half alone under President Macri’s administration, which has imposed sharp hikes in transportation and utility fees and has taken steps towards implementing anti-worker labor reforms.

Throughout the past few years, the Pepsico Plant in Vicente López has seen the birth of a workers’ reorganization process that has defied the leaderships of union bureaucrats, who have consistently failed to protect workers from increased unemployment and the decline in their living conditions. The factory’s shop-floor committee is led by militants of the Trotskyist Socialist Workers’ Party (PTS) as well as combative independents and has been operating democratically for nearly a decade, holding regular assemblies. It is thus unsurprising that in their struggle against the Pepsico workers’ resistance, the company and national government have relied on the complicity of the union bureaucracy of STIA (Food Industry Workers’ Union) led by Rodolfo Daer, which was quick to accept the company’s proposal of keeping the factory closed, telling the workers there was nothing they could do other than receive severance pay under individual termination agreements. The CGT (General Confederation of Labor) itself has been loath to take action, but in light of the massive support and solidarity garnered by the Pepsico workers among the general working population, they have called for a march, although scheduled for August 22 – after the country’s primary elections – and without work stoppages.

The court order issued on Thursday was an important victory that could not have been achieved without the workers’ independent struggle and organization and the massive popular support garnered through their actions. However, their reinstatement and the reopening of the plant cannot be guaranteed without continued resistance.

Last Saturday, the workers held a meeting that was attended by unions from other sectors, including Ctera (Confederation of Education Workers), CTA (Argentine Workers’ Central Union), AGTSyP (Subway Workers’ Union) and Foetra (Telephone Workers’ Union), as well as members of shop-floor committees at several companies and representatives of other sectors and unions that are resisting nationwide. Also present were political leaders, such as those of the Left Front, and members of human rights organizations.

The meeting was convened to outline a plan of resistance for the next few days and ended with a call for a nationwide day of action next Tuesday, July 18, which will include road blockages and mobilizations, as well as the continued campaign for the boycott of Pepsico products.

In his closing statements, Mones declared “After the violent eviction, we received immense solidarity. We believe this is because millions of workers saw that it was possible to confront the big monopolies and Macri’s government that supports them. If all the unions fight against layoffs with the same strength, the government and the companies will not be able to advance as they have until now. So on this day of action, we want all the unions that oppose the national government to take to the streets with us and mobilize thousands of workers from all of those organizations. If we do this, we can start to change history and show that it is possible to fight against all these attacks against working people.”