Cecilia Quiroz: “We Know There Are Resources to Combat the Pandemic!”

In a speech given at the international rally of the Trotskyist Fraction this May Day, Cecilia Quiroz, member of the Socialist Workers Current (CST) speaks about the effect of decades of neoliberalism on Peru and its response to the pandemic. 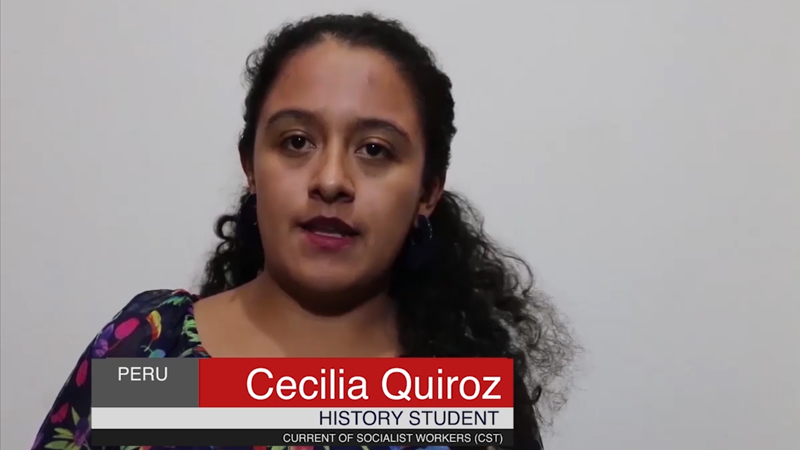 Cecilia Quiroz is a leader of the Socialist Workers Current (CST) in Peru.

The public health crisis can no longer be hidden by Peru’s president, Martín Alberto Vizcarra Cornejo. Millions of workers have been left without income because they belong to the 70% of workers in the informal sector. Meanwhile, the president announced a big rescue package worth millions of dollars, but only for banks and large corporations. At the same time, he allowed the complete suspension of work, so thousands of workers will be left without income for three months. An attack on the working class of this magnitude has not happened since the time of former President Alberto Fujimori — and all of this occurs with the cooperation of the union bureaucracy.

The Broad Front and New Peru, which are part of the neoreformist left in Peru, praise the government for delivering targeted benefits, but these benefits do not even remotely cover a family’s cost of living, nor do they reach all the workers and poor people who need them.

We from the Socialist Workers Current (CST) have been calling for quarantine wages equivalent to the cost of living for an average family, for all workers who live from day to day and have been left without income due to the quarantine.

We also demand the conversion of industry to produce gowns, masks, sheets, beds, ventilators, and other equipment. We know there are resources to combat the pandemic. We demand a tax on large fortunes. We fight so that the workers and poor masses do not have to pay for the crisis this time.This is why we have put our online newspaper La Izquierda Diario Perú at the service of the workers’ struggle and demands. We call on them to advance in the construction of a party of the working class, the peasants, the women, and the youth, so they can fight to create a society free of exploitation and oppression.