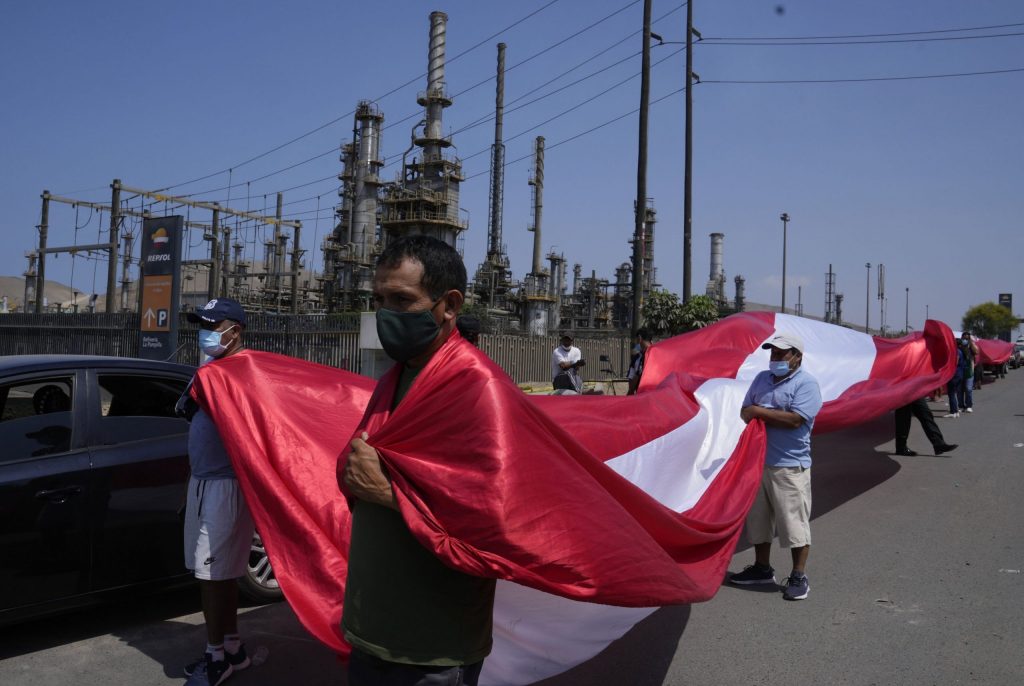 On Saturday, hundreds of fishermen and residents of the areas affected by the oil spill on January 15 mobilized in Ancón, north of the capital of Lima, Peru. The protesters partially blocked the Panamericana Norte highway in protest of the actions of the transnational company Repsol, which has not yet fully assumed responsibility for the oil spill that occurred on the beaches of Ventanilla, north of Lima. This ecological disaster has damaged more than 50 km of beaches on the Peruvian coast and is depriving thousands of fishermen of their livelihoods.

The struggle carried out by the fishermen was accompanied by mobilizations and sit-ins carried out on Friday, Saturday, and Sunday. Various youth groups, environmental NGOs, and other social organizations protested at the door of the Repsol company located in the district of San Isidro and at its headquarters in Ventanilla. The protesters gathered outside the company to demand that it take charge of cleaning the damaged beaches, and the hashtag #HazteCargoRepsol (“take charge Repsol”) has gone viral on social media.

A few days ago, prime minister Mirtha Vásquez announced on behalf of the Castillo government that the company would provide the victims with food baskets and work to clean up the contaminated beaches. This was considered insufficient by the fishermen and the local inhabitants. In this regard, Antoni Chumpitaz, fisherman and representative of the Pachacutano Youth Movement, said, “As prime minister, I had hoped that [Mirtha Vásquez) would be more drastic in demanding that [Repsol-owned] La Pampilla refinery immediately solve the problem, because what they have committed is a crime”.

It is due to the government’s benevolence towards Repsol that to date the clean-up of the contaminated beaches and the rescue of birds and other animals affected by the oil spill has been carried out mainly by environmental groups, young volunteers, university students, fishermen, and local residents. These efforts are insufficient to stop let alone rectify the profound damage caused by the oil spill, which is considered one of Peru’s biggest environmental disasters.

Although many fishermen and inhabitants of the affected areas are receiving money from Repsol for cleaning the affected beaches, this is insufficient, and the fishermen who are taking on the clean-up strongly disagree with the company’s approach. Chumpitaz stated, “Repsol has taken away our jobs and now we have to work for them because of the damage caused. Working for Repsol is something that makes us very uncomfortable, but we had to reach out to clean the beaches.”

According to estimates, more than 1,200 fishermen are currently working in the Ancón area. These fishermen, who depend exclusively on coastal fishing for their livelihood, have not been able to generate income for their families for several days. Repsol’s payment for residents cleaning the contaminated beaches will only last until the end of February, after which the company has scheduled the cleaning of the affected beaches. At that point, the fishermen will again be left without a source of income since, according to experts, the affected beaches will take years to recover. For this reason, the fishermen are demanding full compensation from the company.

But fishermen are not the only ones affected — maritime and local commerce workers are also struggling, since many restaurants, small markets, and other businesses are now paralyzed. For this reason, Pedro John Barrera, mayor of Ancón, calculates that the Repsol’s oil spill is causing losses of up to 10 million soles (US$2.6 million) in the fishing sector and 3 million soles (US$280,000) in tourism and other economic activities that generate income for the local population. This hardship is compounded by the challenges posed by the spread of yet another wave of Covid-19.

Originally published in Spanish on January 24 in La Izquierda Diario.