On Monday afternoon, police fired tear gas and rubber bullets at a large crowd of people who had stopped traffic on a major freeway in protest against police violence and racism. 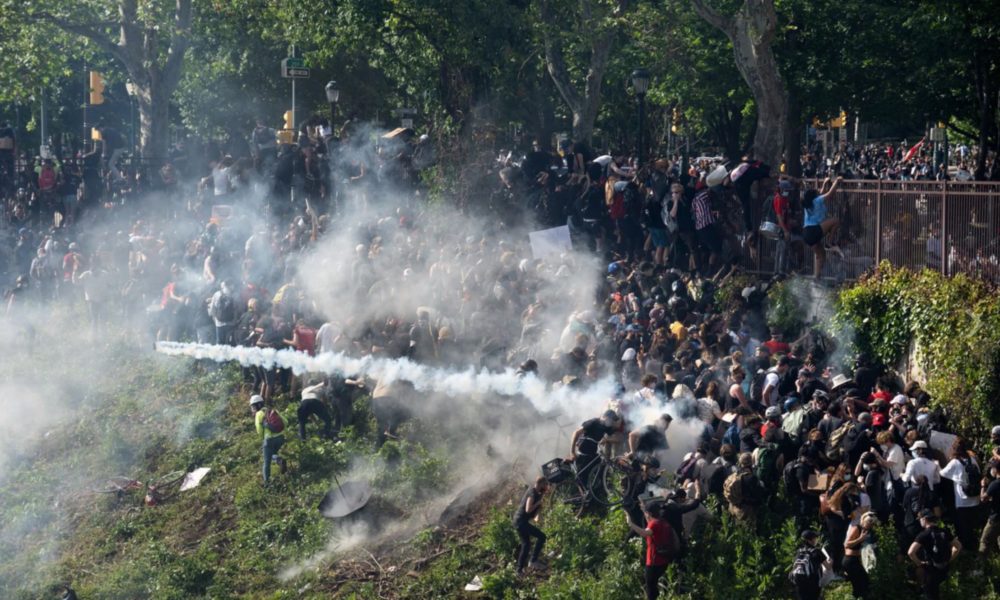 Last night, Philadelphia police attacked a crowd of peaceful protesters on I-676. It was the third night of protests in the “City of Brotherly Love.” People had marched onto the Vine Street Expressway after a speakout at Police Headquarters and blocked traffic as they demanded justice for George Floyd and an end to racism and police violence. The “law” reacted by releasing tear gas over and over and shooting rubber bullets at the protesters who were trapped by the embankments on both sides of the thoroughfare.

According to The Philadelphia Inquirer, Mayor Jim Kenney’s office later explained that, based on statements from high-ranking commanders, some protesters had thrown rocks, and one officer had forgotten to put on their helmet and was thus scared of getting hit. Further, Kenney asserted that the police acted out of concern for the “safety of protesters and drivers,” and Police Commissioner Danielle Outlaw claimed that the police were using tear gas as “a means to safely defuse a volatile and dangerous situation and restore order.” Once again, brutal repression is being justified as a way to protect people.

At 1:00 a.m. on Tuesday, the National Guard was deployed in the city, and there is a mandatory curfew in place after 6:00 p.m. After a Sunday tweet that read, “Law & Order in Philadelphia, NOW!” Trump called Philadelphia “a mess” in a video conference with governors, saying, “Philadelphia, you’d better toughen up.” It would seem that this is precisely what the authorities in Philadelphia decided to do — at the same time, Democratic Mayor Kenney polemicized against the Trump administration, saying that the White House “want[s] to see a continuation of systemic racism.”

As the protests continue, we see no real difference between the responses of cities under Republican control and those run by Democrats. Minneapolis is Democrat-run, and so is Philadelphia. It does not make any difference that Philadelphia’s mayor is a Democrat who endorsed Elizabeth Warren for president. On Saturday, when the protests began, Kenney condemned the “acts of violence and destruction” in the city and applauded the police, claiming he had “never seen a group of people have more restraint.”

Of course, the vandalism that has been so promptly and predictably denounced by public officials did not just erupt out of nowhere. The real “violence and destruction” behind the current explosion of anger is the daily attacks of the police on Black people, the same police who are now engaged in a violent crackdown on the protesters around the nation, including in Philadelphia, a city with the highest poverty rate of the country’s 10 largest cities.

The complicity of the Democrats in the perpetuation of this racist system is clearly visible. Kenney still has not had the statue of Frank Rizzo removed, in spite of the many efforts to take down this monument to an infamous bigot who, as mayor and former police commissioner, waged a full-fledged war on Black people under the mantle of a “tough on crime” policy. Rizzo relentlessly harassed the Black Panthers and the Black liberation group MOVE, precipitating the 1985 bombing on Osage Avenue that killed 11 people, including five children, and destroyed 61 homes over two city blocks.

The repression of the protests all over the U.S. has been absolutely vicious. A man has been shot dead in Louisville, several people (including members of the press) have been maimed, many have been arrested, and many more have been injured. Even now, after what can only be described as the modern-day lynching of George Floyd in Minneapolis, the savage sadism of the police in this country is on stark display as they continue to brutalize people who say “Enough is enough!”

The protests are about much more than George Floyd. They are an outcry against hundreds of years of oppression and murder. Black people are rising up against a system that is killing them. Working-class people of all races are rising up against a system based on racism, oppression, and state violence. Socialists and revolutionaries in the U.S. and around the world must unconditionally support the movement and work to organize and advance the struggle.