The following article was written by a Chilean socialist in the Revolutionary Workers Party (PTR) following an announcement by Chilean President Piñera that he would reshuffle his cabinet, possibly replacing the heads of up to nine ministries. This came less than 24 hours after more than a million Chileans came out for the largest protests in Chile since the military dictatorship. 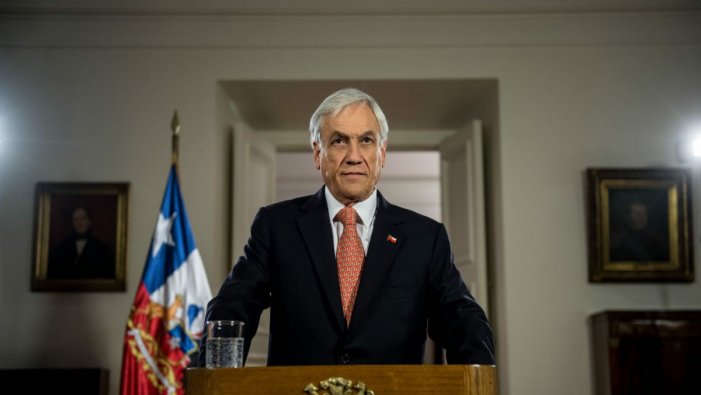 As long as this government remains in power, there will be no resolution of our demands. Piñera says he has heard us. He hears nothing! The demand in the street is: Out with Piñera! Who can believe that this government will respond favorably to our interests? There will be no resolution so long as Piñera remains in the presidential palace and the regime inherited from Pinochet is not liquidated.

The government and all the ruling parties came out with hypocritical celebrations of the historic march that filled Chile’s main cities on Friday, October 25. They steal everything, and now they even want to steal our mobilizations. Those of us who mobilized yesterday are the same people who have gone out every day to bang on pots and pans, march, and confront the repression, shouting for Piñera and the militias to go.

The government’s objective is clear: “With this splendid, peaceful march, we are finished with the demonstrations throughout Chile,” Andrés Chadwick, the Interior and Public Security Minister, hastened to say. But they are the only ones who are finished!

In two consecutive press conferences, the only thing Piñera did was reaffirm his so-called “social agenda,” which is nothing but crumbs strewn atop our dead. The same announcement was made last Tuesday. But the overwhelming majority rejects this, as several polls show. The only things that are new is that the cabinet is being shuffled around, that the state of emergency may be lifted—but only for Sunday—after a week of repression, deaths, and thousands wounded and detained, and that they “want to move forward soon” to lower public transit fares and the price of water and fuel.

The government says it has heard us. I hear nothing! Millions are calling on Piñera to resign. Who believes he will meet our demands? Our struggle emerged from the depths of the streets, challenging the legacy of the dictatorship. “It’s not 30 pesos; it’s 30 years.” We have endured decades of a Chile inherited from Pinochet, maintained and bolstered by the right and by old Concertación coalition (which held the presidency from the time military rule ended until Piñera won in 2010). As we read on so many posters, “The dictatorship endures.” There will be no solution until we liquidate every bit of this regime inherited from the dictatorship!

How to get Piñera out is the real question. And we have to be clear. The formal constitutional trial being laid out by organizations such as the Communist Party is a dead end. Will the Senate vote for Piñera’s ouster? The parties of the old Concertación are already working and legislating in favor of the government’s deceptive “social agenda.”

The policy of “dialogue without exclusions” that drives the Frente Amplio (Broad Front) and the Communist Party, with the “Social Unity Board” at its head, aims only to sustain this government, while millions want it gone. What the government wants most is to “stabilize” the country and for Congress to approve its measures.

To get rid of Piñera, we have to throw him out through mobilizations. We have to continue the general strike until the government falls and push for a Free and Sovereign Constituent Assembly on the ruins of this rotten regime, one that will discuss the urgent measures necessary for solving the problems of workers, students, and the oppressed.

For that, we have to organize a force that adopts that perspective. Already, coordinating committees and regional assemblies are being organized in various cities. There is the Emergency and Guard Committee in Antofagasta, driven by the Teachers College community and in which various unions and workers from industry, the commercial and service sectors, and hundreds of students are participating; they have already voted on a plan to mobilize and expand it. The Cordón Santiago Centro did the same, passing motions in a massive assembly just a few hours before the march. Social Board of Valparaíso also took steps in this direction, calling yesterday for a march on Congress, demanding a no vote on government measures and calling for extending the general strikes. We need more examples like these, throughout the country.